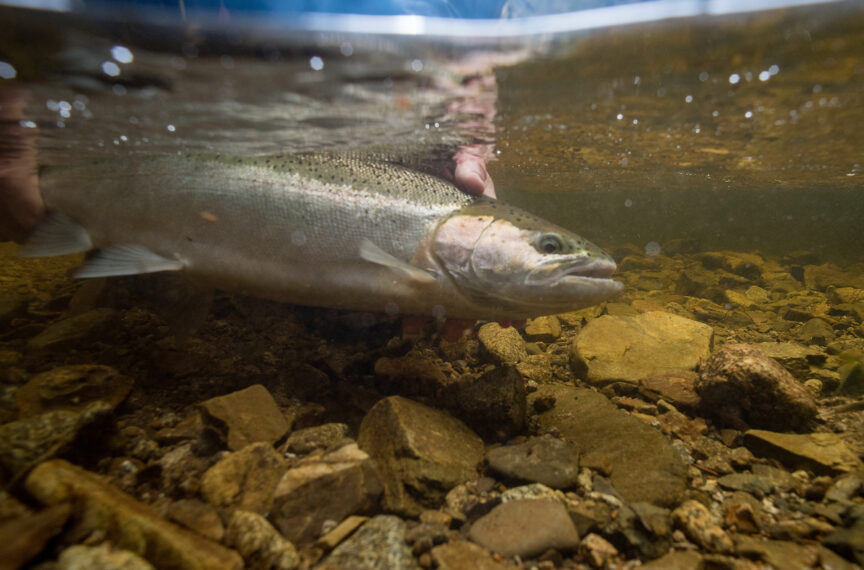 When you think about wild steelhead in the last frontier, you immediately think of the Tongass National Forest in Southeast Alaska.  The breathtaking landscape where large trout, wild salmon and steelhead are plentiful, and the far away scenery you can escape to. Almost all of these creeks, streams and rivers lay within Roadless areas.

Roadless areas are strongholds for vulnerable fish and wildlife, sources of clean drinking water, and contain many sacred sites and traditional use areas.  As we come to better understand the role of mature forests in sequestering and storing carbon, it’s clear roadless areas also are essential to mitigating impacts from climate change.

On the twentieth anniversary of the U.S. Forest Service first enacting the Roadless Rule, Senator Cantwell and Representatives Gallego and DeGette have announced they are introducing the Roadless Area Conservation Act.  If passed, this legislation would solidify safeguards for more than 58 million acres of our national forests by preventing unsustainable old-growth logging and costly logging road construction.  Collaboratively developed state-based solutions for roadless area management in Idaho and Colorado would remain, while the wildly unpopular Alaska exemption would be reversed.

The bill allows fishing and hunting, outdoor recreation, forest health projects and wildfire fighting, energy development, and even certain off-highway vehicle use.  Trout Unlimited is excited to support this important and much-needed legislation.

Communities, Fish & Wildlife on the Tongass Stand to Benefit

In southeast Alaska’s Tongass National Forest, it’s hard to overstate the importance of the roadless rule.

For decades prior to its enactment, unsustainable clear-cut logging mowed through ancient old-growth forest at an alarming and unsustainable pace.  Sprawling clear-cuts spanned entire landscapes, from the ridgetops to river bottoms, with logging roads haphazardly crisscrossing the landscape.  Salmon and salmon streams were an afterthought, if not completely taken for granted.

To this day, we’re still struggling to clean up the mess on the Tongass.  Poorly built logging roads divert entire streams and block salmon migration, clear-cuts extend onto perilously steep slopes and cause landslides that smother salmon spawning areas, previously logged forest grows back so dense and stunted it no longer supports wildlife, and agency budgets are stretched to the breaking point trying to keep up with the cost of maintaining more than 5,000 miles of dilapidated logging roads.  Today, roads on the Tongass contain more than 1,100 bridges or culverts that fail to meet state or federal standards and block salmon from migrating to 250 miles of stream—with very little funding available to fix the problems.

While the Roadless Rule has succeeded in preventing timber sales from extending into new and previously undisturbed roadless areas on the Tongass, old-growth logging still occurs with frequent and costly consequences.

Just last year, the Forest Service tried to hold its largest old-growth timber sale in decades (23,000 acres) before a court ruled the sale illegal.  In November, the Trump Administration took things even further and repealed the Roadless Rule entirely on the Tongass, removing protections for more than 9 million acres despite an astonishing 96% of public comment opposing the change, along with local Tribes, affected businesses, and hunters and anglers.  Even when viewed purely through an economic lens, repealing the Roadless Rule and perpetuating costly and highly-subsidized logging on the Tongass is bad for business.

With so much at stake, and on such a momentous anniversary of the Roadless Rule, please take a moment to appreciate the wild and undisturbed roadless areas on our national forests.

And a special thanks to Senator Cantwell, Representatives Gallego and DeGette, and the many other cosponsors in Congress of the Roadless Area Conservation Act for helping reinstate roadless area protections on the Tongass, solidify their protections throughout the rest of the country, and for ensuring our legacy of safeguarding our public lands that support healthy salmon, steelhead and wildlife habitat for future generations.