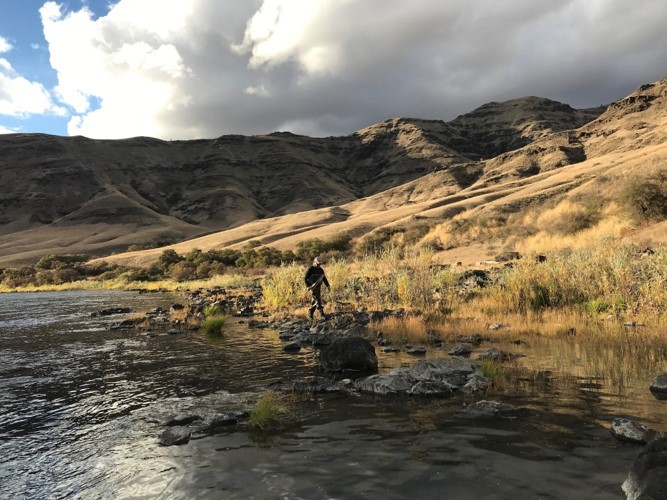 Twenty years.  That’s how long I’ve been working to restore the lower 140 miles of the Snake River – once the largest producer of steelhead and spring Chinook salmon in the Columbia River basin — to a free-flowing state.  But my connection to the Snake has not solely been through my work; over the years I’ve had the privilege of spending many weeks in the Snake basin, fishing and boating its exceptional rivers including the Salmon, Middle Fork Salmon, Clearwater, and Grand Ronde.

The debate over whether to remove the four federal dams that have turned the lower Snake into a series of steelhead-killing slackwater pools became prominent around the year 2000, soon after Columbia basin salmon and steelhead runs were listed for protection under the Endangered Species Act because of their precipitous decline.  Biologists were then raising legitimate questions about whether the Snake’s salmon and steelhead could recover without removing the dams.

Back then, we had yet to take a variety of less potent actions to recover the fish, and “recovery” meant different things to different people. In court, recovery meant compliance with the Endangered Species Act, which the federal government has interpreted to mean keeping extinction risk at an acceptably low level rather than restoring population abundance to provide sustainable wild fisheries, as consistently favored by the public and tribal stakeholders.

Since then, the debate over what to do about the four lower Snake dams has continued.  $17 billion has been spent on habitat restoration, improving fish passage at the dams, and predator control (among other well-intended actions).  But all to no avail.  Today, despite the investment and effort, wild Snake River steelhead and spring Chinook remain in dire straits, with adult returns near record lows.

Their current sad state would likely be even worse without the efforts and investments that we’ve made to date.

Recently, significant developments have renewed attention on removing the lower Snake River dams as the key, essential action to recover Snake River steelhead and salmon.  First, in October the Columbia Basin Partnership, a diverse group of state, tribal and stakeholder representatives (of which I was a member), established that recovery means healthy and harvestable/fishable levels of abundance.  Merely satisfying the minimum requirements of the ESA (extinction avoidance) won’t cut it. In October, the governors of Idaho, Montana, Oregon and Washington signed an agreement committing to work together to achieve the Partnership’s recovery goals.

For Snake River steelhead and spring Chinook, the Partnership’s quantified goal exceeds 100,000 naturally spawning (wild) adults – a far cry from the meager 10,000-20,000 fish that currently return to the Columbia Basin.  We have never come close to achieving this level of abundance since the lower Snake River dams were built. The graph below — from the Idaho Salmon Workgroup convened by Idaho Governor Little in 2020 — displays this reality for wild steelhead.

Achieving this level of abundance requires major actions soon, while there are still enough wild Snake River steelhead and salmon to “seed” recovery.

Which brings us to the second important development: on Tuesday, January 12, ten of the most respected scientists who, collectively, have studied Pacific Northwest salmon and steelhead for 400 years, penned a letter to the governors of Idaho, Montana, Oregon and Washington stating that achieving healthy and harvestable/fishable abundances of Snake River salmon and steelhead cannot be achieved without removing the four lower Snake River dams.

That letter is particularly noteworthy because of the stature of the signatories, but their opinion is shared by the vast majority of scientists who have considered the issue.  Indeed, the Western Division of the American Fisheries Society (AFS) signed a resolution in 1999 calling out the need to remove the four lower Snake River dams to recover steelhead and salmon, and then passed a second resolution in 2011 renewing the call for dam removal and updating the rationale.

The conclusions and rationale of both the scientists’ January 12th letter and the AFS resolutions are entirely consistent with those of Trout Unlimited, Wild Steelheaders United, and other science-driven conservation organizations working to recover Columbia Basin salmon and steelhead. You can read TU’s independent analysis of the scientific evidence in our report, Why we need a free-flowing lower Snake River.

To be sure, returning the lower Snake River to a free-flowing state is not the only action needed to recover healthy, fishable and harvestable numbers of wild Snake River steelhead and salmon. But recovery will simply not be achieved without it.  Now our attention must shift from debating whether to remove the lower Snake River dams to discussing how to remove them, and how to replace the benefits the dams provide with feasible, affordable options.

Fortunately, those options exist, but we need bi-partisan political leadership and federal legislation to remove the dams and secure them.  TU and Wild Steelheaders United remain committed to working our elected officials and all stakeholders to realize our vision of a free-flowing lower Snake River, healthy and fishable wild Snake River steelhead and salmon populations, and a thriving Northwest economy.