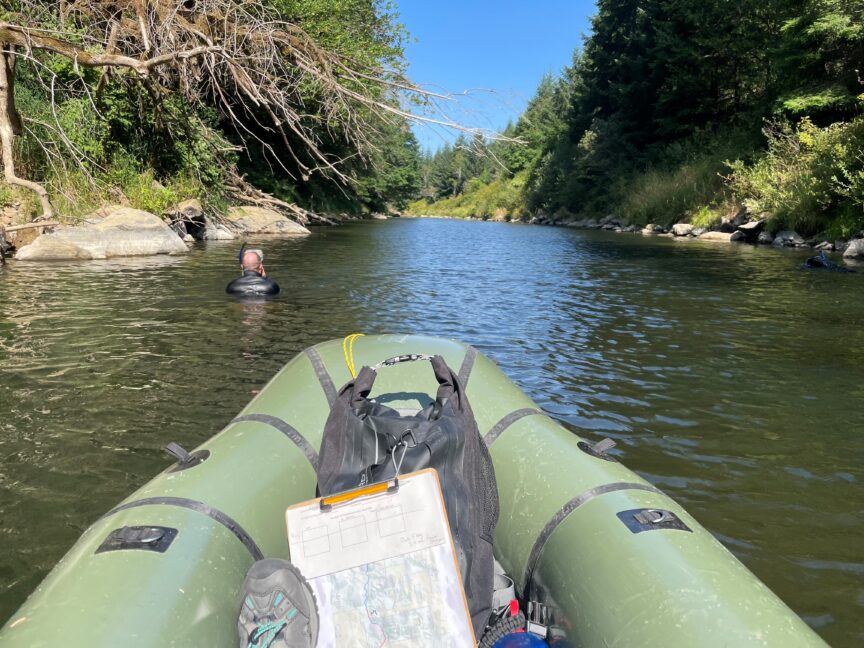 Earlier this summer, a few days before I started working for Trout Unlimited, I received a call from Dean Finnerty. “Do you have any snorkel gear?” he asked. That was the moment I knew I would enjoy my new job.

Dean, whose career prior to coming to TU included decades in both law enforcement and running a fishing and hunting guide business, is the director of TU’s Wild Steelhead Initiative. His question was, in fact, an invitation to what would be my first snorkel survey outing – otherwise known as the Coquille Bass Blitz.

ODFW’s effort to understand and reduce the threat of smallmouth bass is critical for sustaining native fish populations and fisheries in the Coquille Basin. Assessments like the Bass Blitz are organized using multiple modes to survey and reduce smallmouth populations. The Blitz includes teams dedicated to snorkeling, electrofishing and removal. Partner organizations, such as Trout Unlimited, the Bureau of Land Management and the Coquille Indian Tribe, were invited to join the effort.

I spent our first day of surveys on the South Fork of the Coquille snorkeling with two ODFW employees, Fabian and Evan, with Dean serving as our designated data tracker and snack keeper in the hard-shell kayak. It was my first time participating in a snorkel survey, so I followed the lead of Fabian and Evan as we floated down the river in a horizontal line to cover as much water as possible. After each pool (and when Dean was finished snacking), we reported our total smallmouth numbers to him.

I was surprised by several findings that day. The first was that I saw more rough-skinned newts than bass. Frequently I would pass over a shallow section and come face-to-face with the beady, black eyes of a newt tucked in the algae. The second surprise was how many pieces of junk we found in the river. Fabian hauled up everything from sunglasses to a typewriter.

The next day, Dean and I were paired up with another ODFW employee, John, and tasked with surveying a section of the Middle Fork Coquille. That morning as we drank our coffee and ate breakfast prepared by the very hospitable ODFW employees and volunteers, Dean asked me if I minded taking the inflatable Alpacka raft instead of the hard-shell. For many reasons, I am very glad I agreed to this switch in watercraft.

The first half-mile of our four-mile section was easy sailing. With no sightings of bass, my job in the raft was simple and I floated behind Dean and John enjoying the morning sun. Little did I know, those conditions wouldn’t last, and we would spend most of the day hauling the raft through mid-river boulder fields and hoisting it over rocks the size of cars. If we had brought the hard-shell kayak instead of the Alpacka raft, we surely would have needed to abort the survey and haul out up the steep banks of the river through thick poison oak and blackberry bushes.

The Bass Blitz took a week to complete and we were only able to survey a sub-sample of all the areas smallmouth bass reside in. During that time, snorkel surveyors recorded 3,625 smallmouth in the South Fork Coquille and 576 in the Middle Fork Coquille. Boat electrofishing recorded and removed 2,084 smallmouth. The number of smallmouth bass we found during the Blitz was lower than many of us anticipated. Dean suspects this is due to the removal efforts from ODFW in past years and regulations that allow for spearfishing and bait use to reduce impacts of smallmouth bass.

After the blitz, as I drove away from the clear skies of the Oregon south coast, I was overcome with a strange feeling. Ominous, smoke-filled skies had socked in the road along the North Umpqua and I passed fire camps and frequent burn areas. As I came around one turn, I saw a column of smoke blazing up from the hillside above. While I had just spent a week learning that one of the threats to native salmonids was perhaps not as prevalent as we thought, another threat, that of climate change, is becoming more severe. As conditions in salmon and steelhead country continue to get warmer and drier, it’s important that we understand what is happening “on the ground” by collecting and analyzing good data, so we can make informed management decisions for our fisheries and have confidence that the effects of these decisions on both fish and people are sustainable.