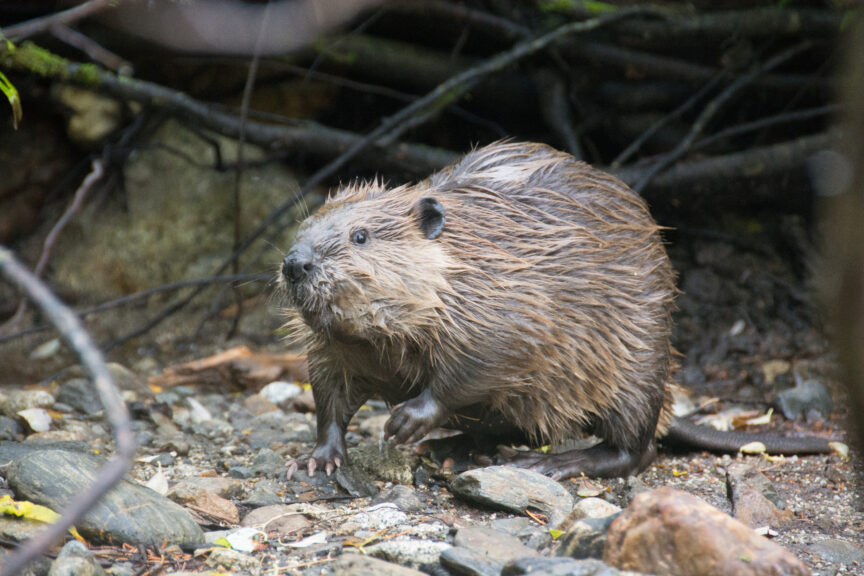 A shadow darts from under a tuft of grass hanging over the edge of the pond, kicking up a cloud of silt in the process. “Must be O. mykiss,” one of us quips as we catch fleeting glimpses of fish frantically searching for cover.

Onchorhyncus mykiss, better known as rainbow trout, are one of the diverse species of salmonids native to the Columbia River Basin. A few small trout in a pond may not seem unusual, but these fish are here against the odds. Where we are — Potato Creek, a tributary to Washington’s Entiat River — the creek runs sub-surface in the summer months, leaving fish high and dry.

Fortunately for these trout, a new arrival to the stream has worked hard to make it more habitable for them: beavers.

The Potato Creek beavers have created a wetland ideal for rearing young fish. And that’s not the only benefit of their work — their pond stores water, keeping Potato Creek wetted for longer.

If they’re lucky, a few of the juvenile O. mykiss in this Potato Creek pond will grow large enough to leave migrate to the ocean, and return as steelhead to spawn.

For millennia, adult salmon and steelhead successfully traversed hundreds of miles of the Columbia River to reach their spawning grounds. Over the last 100 years, however, fourteen dams on the mainstem river and hundreds of others on its tributaries have become major impediments to this journey— and anadromous fish populations have been dramatically diminished.

Should they survive the perilous journey to their natal watersheds, adult fish must find suitable spawning habitat. But climate change has decreased the amount of good spawning habitat throughout the Columbia Basin. Once perennial streams may now only be watered during part of the year due to drought conditions. Those that have water may be too warm to support coldwater-needing fish. If adults do find a place to spawn, their progeny has to live long enough in the stream to survive the trip to the ocean, passing the same barriers as their forebears.

Benefits of beaver dams for fish

Many organizations, including Trout Unlimited, have realized the restorative potential of beavers and have taken action to partner with these industrious rodents. Leveraging beaver-powered restoration such as coexistence, low-tech restoration and relocation, TU and others are restoring streams to support salmonid species.

Trout Unlimited’s Wenatchee-Entiat Beaver Project, for example, launched in 2018, has now relocated forty-one beavers to places in the system where they can deliver their benefits for fish. Sixteen beavers were relocated in 2021 alone, fourteen of which stayed put and began creating healthy fish habitat simply by building their homes.

When streams are unsuitable for beaver relocation, we can replicate their effects by creating “beaver dam analogs.” This is achieved by pounding posts into the stream bed and weaving branches through them, as a beaver would. Beaver dam analogs, or BDAs, have proven incredibly successful tools for improving stream health.

A network of BDAs, for example, constructed on Potato Creek in the fall of 2020, is testament to their utility. After they were installed, the average water depth in the creek increased by about 2” and wetted width increased by 7.5%. In March 2021, the average sediment retention behind the BDAs was 8.06 inches, leading to multiple sites with channel bed aggradation. Incision was reduced by approximately 36% over multiple BDAs.

Soon after the project was completed, beavers colonized the stream above the man-made structures. The following spring, in a pond backed up by a BDA, we found a spawned-out adult steelhead sought refuge as it prepared to make its downstream journey. Salmonids in the Columbia Basin are down, but not out. Through concerted restoration efforts, we can help native salmon, steelhead and trout persist. Beavers can be invaluable partners in restoration projects; in the right spots, their industrious engineering can boost the health and productivity of entire ecosystems. We will continue to hire beavers as “restoration contractors” in the Wenatchee-Entiat Beaver Project — and O. mykiss of all life stages will continue to benefit.