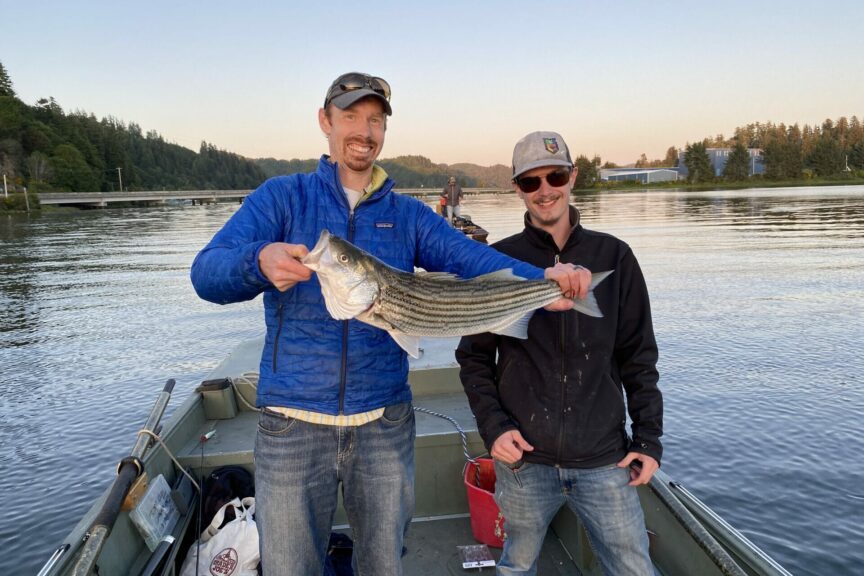 Oregon’s Umpqua River features some of the most famous salmon and steelhead waters in America. It’s an amazingly productive watershed by almost any measure.

Trout Unlimited volunteers and staff have worked hard to keep it that way.

I tested this productivity on a recent visit to the lower Umpqua, during which we fished for just about everything but salmon and steelhead.

My visit was primarily work-related, actually. For the first time in forever those Trout Unlimited staff who support Wild Steelheaders United gathered for several days of in-person skull sessions.

I never imagined strategic planning and brand analysis could be so refreshing. After the forced isolation of the Covid-19 pandemic, it was more than a pleasure to be in the same room with my workmates for hours at a time—it was a salve, a relief.

Even less than perfect weather couldn’t kill the buzz. Precipitation of any sort is a stranger to my home state of California these days, but coastal Oregon still impresses with its profoundly green landscape, frequent cloud cover and the patter of raindrops against a window.

Not to mention the fishiness of its streams.

Wild Steelheaders United is the brainchild of Rob Masonis, TU’s vice president for Western Conservation. Rob is an accomplished and passionate angler, especially for sea-run O. mykiss, the great freshwater sportfish of the Pacific Northwest.

Wild steelhead populations have been in decline—sometimes alarmingly rapid decline—for decades across their native range in Washington, Oregon, Idaho and California. Many stocks are now listed under the Endangered Species Act. While the amazing life history diversity of steelhead improves their odds of recovery, it will take an all-hands-on-deck effort from humans to make sure they’re given every chance.

In 2014 Masonis brought to life his vision of a TU program driven by science and an army of conservation-minded anglers dedicated to improving management of wild steelhead populations and fisheries. I was one of a handful of staff assigned to Wild Steelheaders United, another of whom was a singular individual named Dean Finnerty.

Dean, a career cop who has moonlighted as a hunting and fishing guide for more than twenty years, lives on the banks of the Umpqua and knows the river about as well as he knows his cherished bird dog Molly. He now manages Wild Steelheaders United and is the Northwest regional director for TU’s Angler Conservation Program.

Dean found a suitable venue for the recent staff retreat outside the town of Reedsport, at the mouth of the Umpqua.

On tap was basically a three-day SWOT analysis aimed at expanding the reach and impact of Wild Steelheaders United over the next five years. Fueled by strong coffee, an endless supply of bacon and some of Dean’s heavenly smoked springer salmon, we discussed how we could best leverage our science and advocacy chops going forward to further improve wild steelhead populations and fishery management.

Litigation alone cannot bring back wild steelhead runs to harvestable levels. Relationships matter. Our Portfolio Approach works. The upshot is we will turbo-charge our efforts and results by doubling down on TU’s commitment to a conservation formula based more on partnerships than on lawsuits, build and nourish relationships with key decision-makers and stakeholders, and engage a diverse community of people interested in protecting and restoring streams across the Pacific Northwest and the wild steelhead that for millennia have defined them.

But as far as Dean was concerned, a key component of our agenda was to improve the odds for juvenile salmon and steelhead in the river by reducing the local striped bass population.

That meant spending evenings in boats, throwing $40 topwater baits at banks and seams with rods like cudgels—and mostly finding the stripers, in the immortal words of Captain Barbossa in Pirates of the Caribbean, disinclined to acquiesce to our request.

Over three days, we did catch eight or so, solid healthy fish, a couple in the nine-pound range. When they were near and feeding, they crushed our plugs like teenagers on chicken wings.

We ate one or two, their fillets lightly seasoned in salt, pepper and lemon juice. Dean vacuum-wrapped and froze the rest and dispensed them to the retreat participants when we departed.

I think by the time we wrapped up the retreat Dean felt badly that we had not done more to diminish the striper ranks. So I stayed to have another go with him the next day. Overnight a steady rain settled in. We bailed on mitigating salmon and steelhead predation in the tidal water and pivoted to shad near his home.

Like I said, the Umpqua is an incredibly productive river for fish.

We motored across the river to a spot where a rib of bedrock formed a sort of jetty. Dean had often caught dozens of shad at a time in the nervous water just off this feature. I threw a shad dart on Dean’s 8-weight fly rod. Over a couple of hours we caught two—ingots of iridescent silver-blue.

Dean’s dissatisfaction increased. We swapped the shad gear for big-game tackle and went downriver for sturgeon.

Dean carved up the shad and baited circle hooks below 12-oz sinkers. Casting them was like throwing the hammer in the Olympic games.

Three hours of spitting rain and two catfish ensued. At length Dean made another cast and when he raised the rod tip to settle the bait he felt pressure. He set—and the sturgeon broke off on 120-lb test leader.

That should have been the final indignity of the trip. But it wasn’t.

Dean had left the carcasses of the stripers he had cleaned in a large bucket of water sitting out in his yard. The mixture had fermented nicely. When we got back and he went to dump it in the river, he slipped on the steep, rain-slicked slope and the bucket vomited its contents all over him.

Dean could barely breathe. I rinsed him off with a hose from about ten feet away, trying not to gag.

“Maybe we should stick to steelhead and salmon,” I offered helpfully. Dean glared at me, wheezed, and lurched upstairs to the shower.