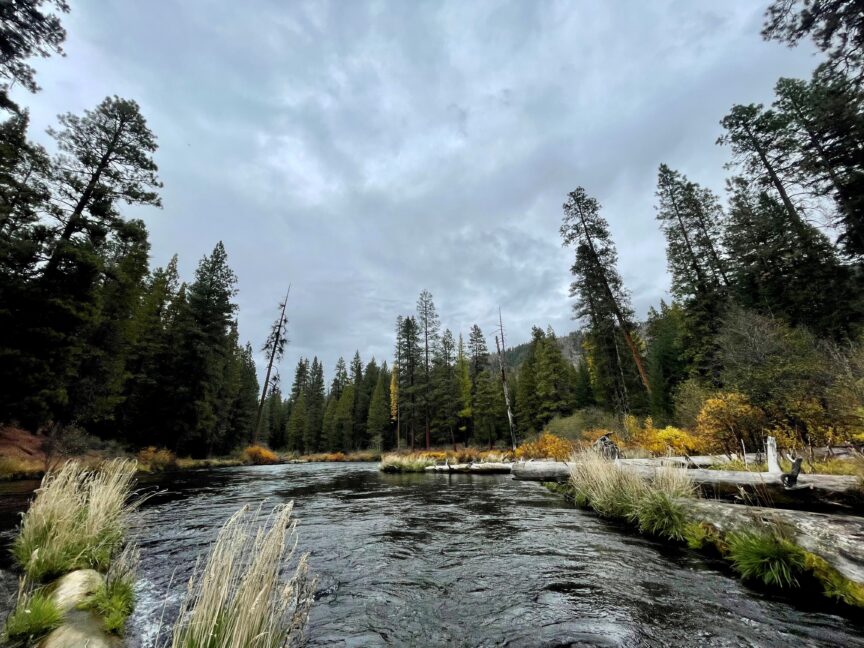 The 2022 Oregon legislative session ended last week, and it was packed with significant conservation legislation (see our Oregon Legislative Preview for background).

Most significantly for steelhead and salmon, the Oregon legislature passed the Private Forest Accord package that reshapes environmental requirements for logging on private land in Oregon. Thousands of miles of streams flow from and through private forest lands in Oregon, and in recent years, the state’s standards for timber harvest on private land have lagged behind the requirements in neighboring states. TU’s Oregon Director Chrysten Rivard played a major role in shaping this legislation, and Wild Steelheaders expects it to pay significant dividends for wild salmonids in the future.

The legislature also passed a bill that will keep the Elliott State Forest in public ownership. This is consequential for steelhead and salmon because the West Fork Millicoma River and numerous tributaries to the lower Umpqua River run through the Forest, and those waters are used extensively by wild winter steelhead, coho, and fall chinook. Under the framework of Senate Bill 1546, a new agency titled the “Elliott State Research Forest Authority” will administer the re-named “Elliott State Research Forest” as a research forest with large conservation areas that are closed to timber harvest. Importantly, the bill does not become operative unless the State Land Board provides for de-coupling the Forest from the Common School Fund by July 1, 2023.

The legislature also took important action in the areas of drought preparedness and lawful use of water resources.

In the run-up to the short session, TU and its conservation partners identified $25 million in potential spending for targeted ways to prepare Oregon’s waterways and wetlands for drought. Thanks to the efforts of environmental champions in the Oregon legislature, every item in that package is included and funded for the full amount requested in budget bill HB 5202 (see Sections 304 and 305 regarding the Oregon Watershed Enhancement Board’s voluntary water acquisitions program; Section 399 regarding the Oregon Department of Fish & Wildlife’s fish passage barrier removal program; Section 401 and 402 regarding the Oregon Conservation and Recreation Fund; and Section 403 regarding ODFW’s Habitat Division). This funding should result in more water staying instream in Oregon’s rivers; removal of fish passage barriers; increased habitat restoration and related education and research; and collection of significantly better data on stream temperatures in important watersheds and coldwater refugia.

House Bill 4061 provides new tools to the Oregon Water Resources Department in addressing unauthorized use of water. As summarized in TU’s testimony on the bill, the illegal cannabis industry in Oregon is causing significant harm to native fish and water resources in Oregon — many of these growers irrigate their crops by pumping water from streams or groundwater without a water right.  HB 4061 requires all suppliers of hauled water – and all individuals that purchase water from them for irrigation or nursery purposes – to keep and produce records of those transactions. The bill also prohibits hauling water to any cannabis grow site that isn’t registered or licensed with the state, and establishes new criminal penalties for violating the water code as amended by HB 4061.

The legislature also passed Senate Bill 1589 (known by many as the Willamette Wake Boat Bill), which restricts boat sizes and wake surfing in the 28 miles of the Willamette River located upstream of Willamette Falls known as the Newberg Pool. The Newberg Pool is an important migratory corridor for several anadromous species, including wild winter steelhead from the Molalla and Santiam River basins, but the proliferation of large ballast capacity motorboats on this section of the river has created erosion and water quality concerns over the past several years. SB 1589 sets a maximum loading weight limit for motorboats that engage in towed watersports in the Newberg Pool to 5,500 pounds and prohibits wake surfing in the Newberg Pool from a boat that uses methods to increase wake sizes. TU supported this bill as we expect it to improve water quality and habitat conditions for fish.

House Bills 4145 (the so-called Hatch Box Bill) and 4148 (AKA the Salmon Credit Bill) did not pass this session. TU and Wild Steelheaders had concerns about these bills (see this group letter submitted to the legislature by groups including TU for more background on HB 4148), and will evaluate those proposals again if those ideas return in the future.

Lastly, the legislature also approved $7MM to the Oregon Department of Transportation for terrestrial wildlife corridor projects to improve safe wildlife movement and migration past roads and highways. TU supported the proposal because some of those projects could be paired with fish passage improvement work. The wildlife corridor concept was originally embodied in House Bill 4130, but ultimately passed during the session as Sections 342 and 464 of budget bill HB 5202.

If you have questions about the Oregon legislative session, please contact James Fraser, Oregon Policy Advisor at james.fraser@tu.org