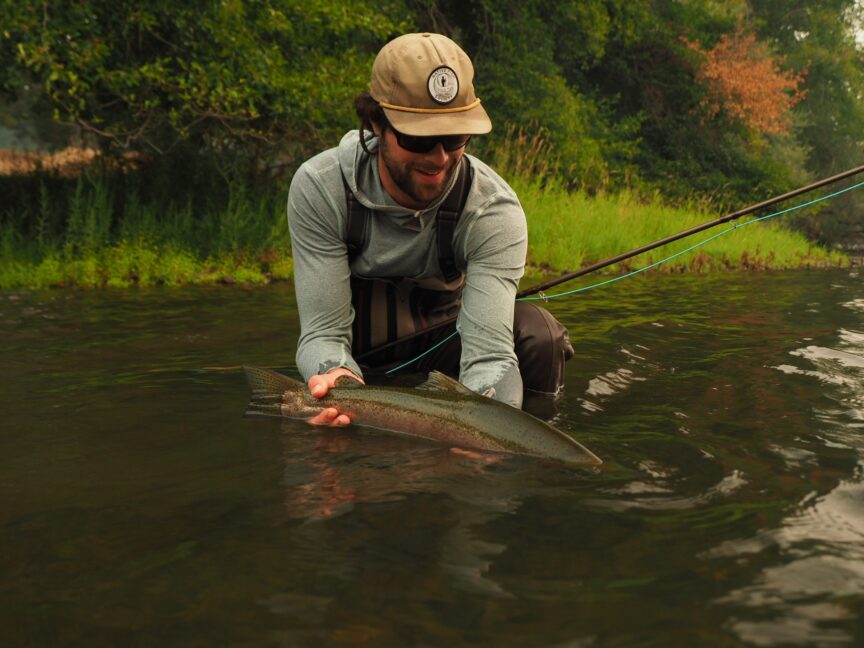 Steelhead anglers probably have disagreed with aspects of sport fishing management since the dawn of fishing regulations. In recent years, however, one area of disagreement has come into sharp focus: sport harvest of wild steelhead.

Throughout the Lower 48, nearly all wild steelhead runs are now at a fraction of their historical abundance, distribution and diversity, and in recent years, many populations have produced some of the lowest, if not the lowest, run sizes on record. Despite the worrisome status and trends, a few fisheries in Oregon continue to allow harvest of wild steelhead, and as a result, there has been renewed controversy over whether any direct harvest should be allowed.

To be clear, this is not merely a social debate about how we value these fish — this is primarily a debate among scientists, fish managers, fish advocates and anglers about whether the effects of harvest will contribute toward further declines, and eventual closure of fisheries. The way steelhead populations respond to harvest is rooted in the basic biology of the fish. While it can be difficult to separate the wheat from the chaff in these debates, steelhead and other salmonids have been well studied, and the large body of scientific literature can provide us with important insights to guide wild steelhead management.

From Seattle to San Diego, the only region where sport harvest of wild steelhead is still allowed is Oregon’s south-central coast. Earlier this year, the Oregon Department of Fish and Wildlife released a draft Rogue-South Coast Multi-Species Conservation and Management Plan (RSP) that would update sport fishing regulations for steelhead in rivers such as the Rogue and Chetco. This plan would continue to permit sport fishing harvest of wild steelhead, despite large gaps in scientific data on population and age class numbers.

Over the last month, anglers came together to voice their support for pausing the harvest of wild steelhead on Oregon’s south coast. Over 2,000 comments from wild steelhead angler-advocates urged ODFW to select a catch and release alternative for wild steelhead in its final RSP.

On October 15th, ODFW will present the RSP to the Oregon Department of Fish and Wildlife Commission, and the commissioners will review and comment on the plan. In the meantime, we offer this five-part series of posts on why catch and release is the best option for the long-term health of wild steelhead, and drill down to the basics about the methods scientists use to evaluate whether a population can support harvest, and if so at what level.

Successful management of any fish or game animal — which necessarily means ensuring a healthy, durable population that can persist as habitat conditions change — must start with the biological fundamentals. How many animals do you have? How productive are they? What is their distribution and is the population stable, decreasing or increasing?

Without this type of data it is impossible to know how many, if any, animals can be removed through harvest without harming the population, and how such actions could impact the population’s resilience and diversity.

The questions are simple, but they are not necessarily easy to answer, especially for a species like steelhead that often inhabit large watersheds with hundreds to thousands of stream miles. We can’t survey and count steelhead across an entire watershed, or sample them every day of the year. Counting every fish in every nook and cranny of a watershed is an almost impossible task, so even answering the first question is more challenging than it might seem.

Generally, managers sub-sample a portion of stream habitat for adult redds and/or juveniles and then extrapolate that information to the entire basin. The more thorough the sampling is, such as covering a greater length of the total stream habitat in a watershed, the greater the certainty in the estimate. For example, ODFW has done a remarkable job of monitoring, researching, and adaptively managing Coastal Coho Salmon populations, and many scientists have relied on the methods that were developed for those fish.

Unfortunately, steelhead have not received the same amount of attention, presumably because they are not ESA listed and there is, consequently, less funding for monitoring and research. Because the monitoring is much more limited and less habitat and fewer fish are sampled, there are substantial data gaps and tremendous uncertainty associated with their annual monitoring efforts. Turning this data into meaningful estimates requires making several assumptions, and if those assumptions are not tested and validated, it can lead to policy decisions that are not in the best long-term interest of the fish and the fisheries they provide.

Let’s unpack what this means and define what we mean by assumption. An assumption is a concept that is generally accepted scientifically as true or accurate, but lacks specific data to support it. For instance, in many watersheds it is assumed the stream habitat is filled to capacity with juvenile steelhead. If true, adding more adults to the spawning population (think more eggs in the gravel) will not necessarily result in increased abundance in the next generation because there is simply not enough “room and board” for the extra juvenile fish. Under such conditions, the only way to increase the abundance of adult steelhead is to improve freshwater habitat so it can support more juvenile fish.

Unfortunately, these assumptions are rarely tested for steelhead. There is a tremendous amount of knowledge and research on steelhead, but data quality and quantity on adults and juveniles is often insufficient to rigorously evaluate the capacity or productive potential of the available habitat. Bridging the gap between a basic understanding of fish and habitat associations and watershed capacity is difficult, and where it has been done, it has been based on sound monitoring and research on abundance, life history (e.g., size, age, time of entry and spawning), and distribution of juvenile and adult life stages.

Still, even in our best case scenarios — and as we outline in future posts — a great deal of uncertainty remains, which is why we are going to take a deeper dive into the biology of steelhead that forms linkages between their biology, management, and the future of our fisheries.

To understand fisheries, we first need to understand density dependence and its relevance to the fish, fishery management and estimating productive potential.

Density dependence is how population vital rates change in relation to density. For example, a common result of density dependence is decreased growth or increased mortality in relation to an increase in density of juvenile steelhead. This occurs because of competition for limited resources. There simply isn’t enough food or space for all fish to grow and survive equally. Consequently, some fish grow and survive at higher rates than others, which is why size is often a good predictor of survival from one life stage to the next. All else being equal, size matters: larger fish usually survive better than smaller ones.

The concept of density dependence is at the core of a population’s ability to compensate for a reduction in the number of spawning adults, whether that reduction be related to natural or human factors, such as harvest. Compensation occurs when the per-capita productivity of spawning adults increases as their density decreases.

In theory, once the number of returning adults is low enough that there is ample vacant spawning and rearing habitat (which would be utilized in years when run sizes were larger) the reduced number of fish grow and survive better. ODFW’s assumption for the Southern Oregon Coast is that low levels of harvest will not have a negative effect on the long-term health and durability of wild steelhead populations because they will compensate with better growth and survival, which should in turn improve productivity for the next generation.

While salmon and steelhead are known to exhibit compensatory responses, each population has a different capacity for response. For this reason, most successful fisheries are grounded in collection of high-quality data at appropriate scales over a sufficient period of time to have a basic understanding of population status and trends.

A fishery should always have as its primary goal the maintenance of a sufficiently abundant, diverse and well distributed supply of spawning adults. If too few adults return to spawn, there may not be enough juveniles to fill up all of the habitat, partly because fewer adults will not be able to spawn across all the habitat, and partly because juvenile steelhead have their limits (even though they can swim relatively long distances) and long-distance dispersal often comes with a cost of increased mortality. Ultimately then, if too few fish return they may not be able to fully compensate, resulting in reduced production of smolts and returning adults.

This is where a fishery’s escapement goal comes in. Escapement refers to the number of fish that escape the fishery and survive to spawn. Escapement goals attempt to estimate how many spawning adults it would require to take advantage of the available habitat. If the run size is forecast to be greater than the escapement goal, a fishery is allowed. Alternatively, if the run size is expected to be less than the escapement goal, a fishery could be restricted or perhaps, in the case of very small run sizes, not allowed at all.
Establishing an appropriate escapement goal is critical for any fishery. Goals that are too low may depress a population beyond its ability to recover, while goals that are too high may be unrealistic and eliminate potential for any fisheries. Ideally, there is a sweet spot that balances the conservation needs of the population to remain resilient through climate change and also creates opportunities for anglers to get on the water and enjoy fishing for wild steelhead. But finding that sweet spot depends on having sufficient information about density dependence on other population and habitat metrics — which is what ODFW does not have right now as it prepares to bring the draft Rogue-South Coast Multi-Species Conservation and Management Plan to the Oregon Fish and Wildlife Commission.

Next week we take a deep dive into the important early-life biology of steelhead, and how the distribution and timing of spawning can influence density dependence and escapement goals. Until then, please help our wild steelhead by fishing responsibly during this drought- and heat- afflicted summer.

Author Nick Chambers — from Grants Pass, OR — is a Master’s candidate in the University of Washington’s fisheries program.