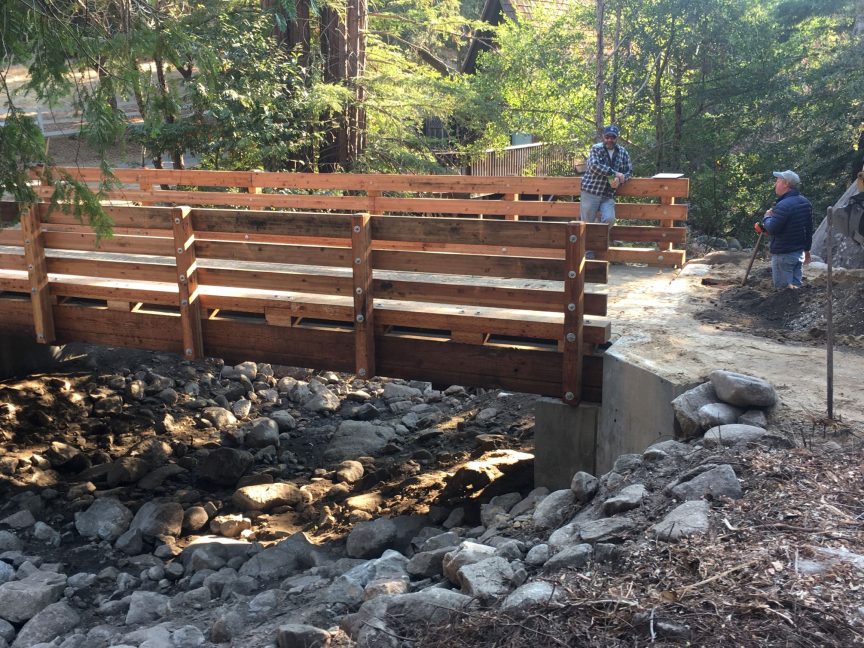 Bruce Dormody was born and raised on a secluded, 2600-acre property in the hills above Carmel Valley, California, operated for decades as San Clemente Rancho, a private recreational retreat on the northern boundary of the Ventana Wilderness in the Santa Lucia range. For four decades he has been the primary steward of this land — and of San Clemente Creek, an important spawning and rearing tributary to the Carmel River for native central coastal steelhead.

San Clemente Creek is the first tributary available to steelhead upstream of the former San Clemente Dam (removed in 2017, with support from Trout Unlimited). Like many tributaries to such small central coastal rivers, San Clemente Creek is for much of the year small enough to step across. However, unlike other creeks of its size here — which are often dry or reduced to disconnected pools between June and December — San Clemente has surface flow year-round and cool water, shaded by stately redwoods.

Steelhead have adapted to the variable rainfall and streamflows of this region, and utilize San Clemente and other small creeks for spawning and rearing. Because of its perennial nature, San Clemente Creek provides good habitat for steelhead even in drought conditions.

Dormody has proof of this. In recent years, especially since the San Clemente Dam was removed, he has shared via the San Clemente Rancho’s social media photos and video clips of adult steelhead making their way up San Clemente Creek to spawn.

Trout Unlimited, through Central Coast Steelhead Coordinator Tim Frahm, has been working for years throughout the Carmel River watershed to restore steelhead habitat and improve fish access to tributary habitats. An old concrete ford on San Clemente Creek — located three miles upstream from the confluence with the main-stem Carmel River where No Name Road crosses it — blocked passage for steelhead at most flows. Removal of this ford had been identified as one of the highest priority actions under the federal recovery plan for the south central coastal distinct population segment (DPS) of steelhead.

Several years back, Frahm reached out to Dormody about removing the No Name Road ford and replacing it with a bridge to improve access up and downstream for all life stages of steelhead. The ford provided vehicle and pedestrian access to residential and recreational cabins in the San Clemente Rancho so the bridge would need to do the same while meeting 100-year flow event and gross vehicle weight requirements. Once completed, the bridge would open three miles of spawning and rearing habitat in upper San Clemente Creek to steelhead which, because of its year-round flow, would boost the resiliency of the Carmel River population.

Bruce Dormody loves the steelhead he has seen on his property, and fished for in the Carmel River, since he was a kid. He also, like many rural landowners in remote locations, has a no-nonsense, get-er-done yourself demeanor and wariness of outsiders. So when Frahm came calling about designing and constructing a fish passage project on San Clemente Creek to help steelhead, Bruce didn’t jump on board immediately. Instead, he said he would think about it.

It took him five years (and many visits and conversations with Frahm) to think about it. And when Dormody, a licensed contractor, did agree to become a primary partner in the project, it was on the condition that he be allowed to do the construction work himself.

Dormody and TU entered into a “voluntary agreement” — TU would provide the design, permits and materials (bridge deck, concrete, steel and rock) and Dormody would provide the labor and his equipment. This arrangement saved more than $200,00 in costs for the project.

In 2017 Frahm began getting quotes and raising funds for the design phase of the project, which was completed in early 2019. By then, Frahm was developing grant proposals to underwrite the construction costs. When the California Coastal Conservancy awarded this funding, Frahm ordered the bridge deck and scheduled construction.

By mid-2020,  Frahm managed to obtain the requisite permits from the county, state and federal government; the construction phase, which had to be implemented in the low flow period between spring runoff and the onset of winter rains, began in August of 2020 and took three months to complete. The construction phase included de-watering of the stream through the project site and relocation of the dozens of juvenile fish living in that stream reach; purchase and delivery of a pre-fabricated wooden bridge deck (delivered from Oregon); site clearing; demolition of the old concrete ford; excavation for the bridge foundations; poured-in-place concrete foundations; placement of a free span bridge; reconfiguration of the stream channel and re-watering of the project reach.

A handsome, sturdy bridge now spans San Clemente Creek where No Name Road crosses it. While visiting Dormody at the site last fall, Frahm documented the first entity to utilize the bridge: a tarantula.

The No Name Road bridge project underscores the multi-year timeframe required to negotiate, plan, fund, design, permit and complete construction of such restoration work. It also, according to Frahm, “highlights the importance of non-specific contributions from TU donors, which provide the flexibility for staff like me to develop and raise money for these types of projects.”

Frahm and Trout Unlimited are committed to restoring the Carmel River and its once productive steelhead run. Frahm is leading fish passage projects on other tributaries to the Carmel (Cachagua Creek and Potrero Creek) and the Steinbeck Country Chapter is a lead partner in the conversion of the former Rancho Canada golf course to regional park land, dedication of a portion of the course’s water rights to the river, restoring/reconnecting floodplains and “re-wilding” of the river corridor through this reach.

For more information on TU’s work in the Carmel River watershed and other central California coastal streams, contact Tim Frahm at tfrahm@tu.org.