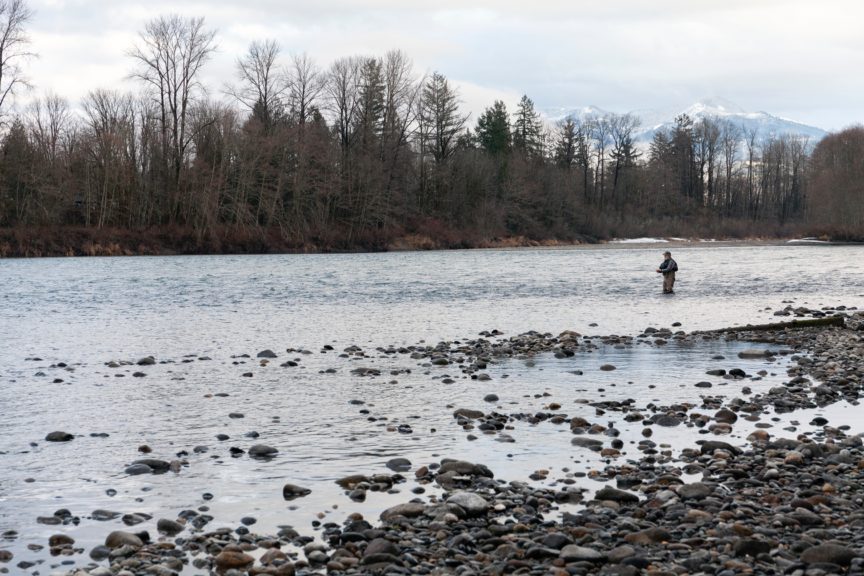 Although winter steelhead season has begun, between the rain and snow those of us living in Washington haven’t had much of a chance to hit the rivers. That is by definition winter steelheading, however, and we wouldn’t love it so much if the weather and river flows were perfect all the time.

Whether drifting or banking it, we understand the ebb and flow of our pursuit. Still, sometimes the negative news regarding steelhead can pile up. This summer the Columbia and Snake Rivers experienced very low returns of both hatchery and wild steelhead. The Skeena steelhead were also depressed.

Another piece of bad news came across the wire this morning. The Washington Department of Fish and Wildlife (WDFW) announced it will not open the catch and release (CnR) steelhead fishery this spring on the Skagit River (see notice here).

The last few years the Skagit runs have been large enough to open a fishery, but this year the run size is predicted to be just 3,900 wild steelhead. Once the run size gets below 4,000 fish WDFW and co-managing tribes don’t have enough allowable impacts under the Endangered Species Act to open a fishery.

Although we are disappointed that this year’s returns are low, and we worked hard with other groups to reopen the fishery in 2018, we support WDFW’s decision.

Managing wild populations of steelhead is never easy, especially when effects from ocean conditions and climate change interact. For example, as WDFW noted, some of this year’s adult Skagit steelhead were likely born in 2015 or 2016. That means they would have experienced the terrible drought and heat of 2015 and the warm summer of 2016. And, as we have recently seen in the Columbia River basin, consecutive years of bad ocean conditions can dramatically reduce smolt-to-adult survival, in turn, greatly depleting the size of the returning population.

Regardless of the cause, giving the Skagit fish a break this season is the right thing to do.

However, poor forecasts for steelhead returns are not limited to the Skagit. This year’s trend appears to be related to a broader issue in the ocean. Consequently, some of the smallest run sizes on record are forecast for revered Olympic Peninsula (OP) populations,like those of the Quillayute and the Hoh Rivers.

The Hoh, for example, is forecast to return only 2,900 wild winter steelhead. The escapement goal for this river is 2,400 fish, leaving only a buffer of about 500 fish for the sport and tribal fishery.  If the run size is actually smaller than forecast — not uncommon because forecasting is fraught with uncertainty — there might not be enough fish to meet the escapement goal.

The Skagit fishery has helped diversify the portfolio of winter steelhead fisheries the past two seasons by providing anglers in Puget Sound with a chance to find some chrome in their own backyard. With the closure of the Skagit for this season, many – if not most – of those anglers will likely head to the OP for their winter steelhead fix.

We can’t blame them. Steelheading is a culture and way of life.

The challenge of fishery management is always striking the appropriate balance between fishing and conservation, and ensuring we don’t cause significant impacts to runs during poor returns such that future generations of both steelhead and anglers would be compromised. It is vitally important to do what we can as anglers to ensure that as many steelhead as possible make it to their spawning grounds.

The OP presents such a challenge. The Hoh population is in long-term decline since 1980, as is that of the Queets, and while the Quillayute has fared a bit better, it too has declined sharply since the 1990s. And according to a 2014 report on angling data from the Hoh, anglers catch and release a substantial proportion of wild steelhead on this river (and likely the entire OP).

In its analysis of the Hoh angling data, WDFW estimated that anglers caught and released each wild steelhead on average of 1.4 times. Similar encounter rates were reported on the Sol Duc River. The Skagit helped reduce pressure on those rivers, and likely reduced encounter rates (though we have not reviewed the data so far). With the Skagit closure, anglers will once again be concentrated on OP rivers during a time when wild steelhead returns are forecast to be some of the lowest on record.

Let’s be clear: Wild Steelheaders United doesn’t think sport anglers are the cause of the current poor returns of wild steelhead or their long term decline in many watersheds across their native range. However, we do believe that as sportsmen and women we have an obligation to help conserve the natural resources we love.

To that end, there are things we can do to reduce stress on the fish, such as using the appropriate size and strength of gear, minimizing handling, and keeping the fish as wet as possible.

But, especially when times are lean, we also need to think about encounter rates. Maybe that means being content with a couple steelhead, rather than striking for gold each and every cast.  Maybe it entails trying a new method or tactic that is less successful, but that still could yield a fish. Or, perhaps it’s spending more time taking photos or just walking a river, honing your powers of observation.

This winter won’t be an easy season for Washington anglers. It’s clearly not an easy season for wild steelhead. And while the situation may not turn around quickly, our only option, really, is to remain resilient and continue to do whatever we can to conserve these beautiful fish.

Fishing for steelhead, by its very nature, tests one’s character and mettle. Like no other fish, steelhead provide the ultimate angling reward, even when you come away empty-handed. Our steelhead angling community has been tested before, but right now steelhead need us more than ever to return the favor. Let’s use this season to be the best advocates we can be, because without anglers, wild steelhead don’t have a fighting chance.