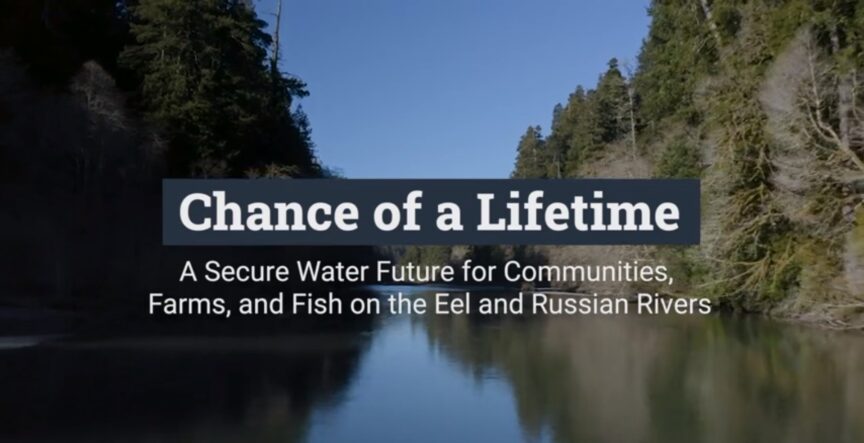 Along the fabled Lost Coast of California, and especially in the Eel River watershed, a three-party coalition of leading conservation groups is spearheading new, collaborative solutions to problems that are driving native steelhead and salmon to the brink of extinction.

Today, the Salmon and Steelhead Coalition, comprised of Trout Unlimited, California Trout, and The Nature Conservancy, announced its support for one such solution: a new plan that would re-open nearly 300 miles of headwaters habitat to salmon and steelhead in the Eel and improve water supply reliability for water users in the Russian River basin.

The Coalition also released a short film, Chance of a Lifetime, in support of the new plan.

The Eel River is California’s third largest watershed and, prior to construction of the Potter Valley Hydroelectric Project and other human development, once boasted salmon and steelhead runs of as many as a million fish annually. Today, most of these runs are threatened or endangered.

The Potter Valley Project consists of two dams on the upper Eel—Scott and Cape Horn—as well as trans-basin tunnels that divert about 60,000 acre-feet of water per year from the Eel to the Russian to generate hydroelectric power. This water ultimately flows to agricultural and municipal users in the Russian River Watershed.

But the 100-year-old project is now obsolete in terms of hydropower generation. In 2019, the current owner of the project, Pacific Gas & Electric, indicated it does not plan to relicense the project due in part to estimated operating losses exceeding $5 million annually.

As no other party had yet proposed to acquire the facilities, PG&E put the project on a path for decommissioning. This decision created uncertainty around the security of water supplies in the Russian River watershed and the future of salmon and steelhead in the Eel River.

The plan submitted today to the Federal Energy Regulatory Commission would address both of those uncertainties. The plan was developed by the Two-Basin Partnership, a group of key stakeholders including the County of Humboldt, Mendocino County Inland Water & Power Commission, the Round Valley Indian Tribes, Sonoma Water and California Trout.

The partnership was born out of an initiative led by Rep. Jared Huffman, whose district includes the Potter Valley Project, to find a workable solution for the project that would help the communities, businesses and wildlife species that depend on Eel River water. The Salmon and Steelhead Coalition has worked closely with the Partnership since its formation to develop such as solution.

Charlie Schneider, president of TU’s Redwood Empire Chapter, has been one of TU’s representatives in the “Two-Basin Solution” process for the Eel. “Today, the Eel River is a shadow of its former self,” Schneider said. “The good news is, there’s a lot of intact habitat left here, and we know that salmon and steelhead can rebound if we help them to reach that habitat. And the way to get there is by working cooperatively with all the folks that depend on water from the Eel to make sure everyone’s needs—people and fish—are met.”

Today’s FERC filing is an important milestone, but there remains a long way to go to achieve the goals of the Two-Basin Solution—restoration of the Eel’s legendary salmon and steelhead fisheries, and greater water reliability and certainty for Russian River water users.

Key steps moving forward include determining an appropriate financial contribution from PG&E and water users who will pay into the regional entity, plus potential state and federal support to reflect the many public benefits of this plan.

Finally, we look forward to a broader and more open process in which affected stakeholders have a seat at the table to be a part of the final agreement for the project as it moves forward.

You can watch the new video produced by the Salmon and Steelhead Coalition in support of the Two-Basin Solution for the Eel and Russian Rivers here, and find the Coalition’s press release on today’s FERC filing here.