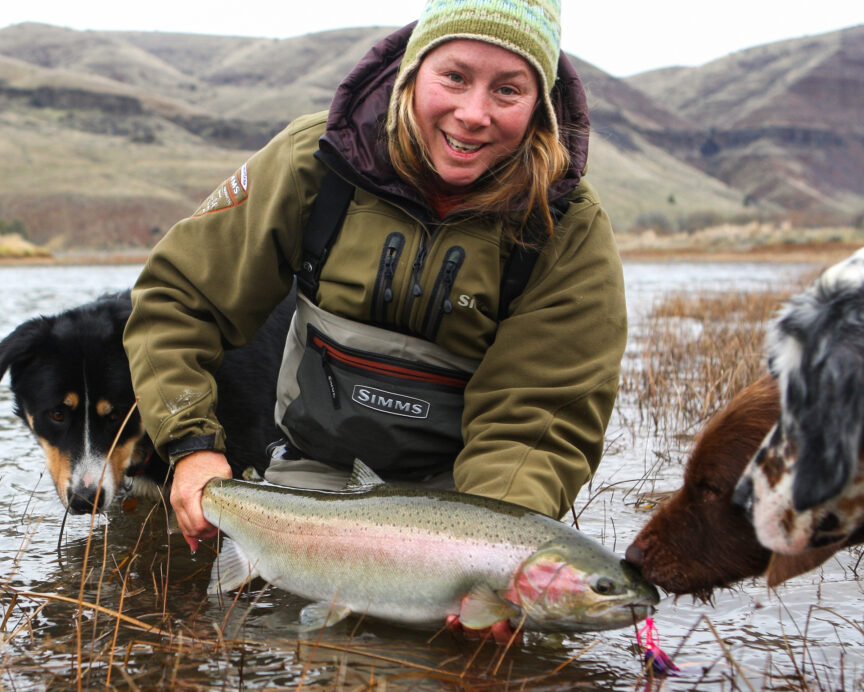 Last week, Wild Steelheaders United launched the John Day Steelhead Project, a crowdfunding effort during the month of May with the goal of raising $10,000 to help researchers at Oregon Department of Fish and Wildlife, Oregon State University, and partners install acoustic tags on John Day steelhead to track their migration upriver. You can learn all about the research, as well as prizes for our supporters including limited edition t-shirts and a trip to join the Wild Steelheaders team on the Olympic Peninsula over on our John Day Steelhead Project page.

This week, we’re excited to offer a guided trip on the John Day with Marty and Mia Sheppard of Little Creek Outfitters as a thank you to our most generous donors. The below post from Mia was inspired by her time on the John Day, and we hope will inspire you to consider supporting the work being funded by the John Day Steelhead Project.

Wild Steelhead: The Jewel of the John Day

We’re helping a team of researchers fund a study of steelhead migration on the John Day River. Learn more about the project, check out the prizes and make a donation here: https://go.tulocalevents.org/johndaysteelheadproject

As I head west out of Condon, a town of 600, and get east of the John Day River, I drive past wheat fields and rolling hills, where mule deer graze on winter wheat and the sky stretches for miles.  As the road descends into the canyon, I catch my first glimpse of the river. Reflections of gold, red, and orange dance on the still moving water. The wind blows, carrying the sound of chukar in the distance.  This first glimpse of the river is what started my love affair with the John Day and the wild steelhead I would become so intimately connected with as a business owner and guide over the next two decades.

The John Day is one of the last truly untamed, natural rivers. The river is undammed with no hatcheries, so the fish are wild except for the occasional stray hatchery fish. The steelhead are incredibly resilient and travel hundreds of miles to make it back to their home water.

Harry Piper, a long-time guest and steelhead conservationist described John Day steelhead as, “truly beautiful, each one a living jewel. They fight hard, harder for their size, than any steelies I’ve caught anywhere, including British Columbia. I love them, they are one of my personal links to the heart of the earth.”

There’s no greater joy than sharing my passion for the river and wild fish with others.  Watching a first-time angler or a long-time steelhead addict land a John Day wild fish is magic.  Without fail, the angler and I get caught up in the moment and taken away by the strength of the grab and the personality of each fish.

It’s the middle of November and Harry is in my boat. We share fishing stories and enjoy the desert landscape as we float to the next run. On this day, the sun is shining and it’s about 40 degrees. Typically, the weather is unpredictable and the dry, arid days suck the moisture out of your skin. But each day is worth it to experience stepping down a run, swinging flies, to connect with a species that is truly wild.

We arrive at a piece of water I’ve wanted to fish all day.  Harry tells me he’s never fished this run before.  I show him where to start. With the strength of a young boy, he steps into the water and starts casting his two-handed rod.  I watch in peace and admire his casting.  Harry’s reel starts to spin and the fish jumps, chrome as can be, it jumps again, and again.  Harry calmly reels it in and I help him land it. The fish has shoulders like Michael Phelps and rosy red cheeks. We admire his beauty and Harry releases it, satisfied and energized.

John Day steelhead are worth protecting. Studying the steelhead migration is critical for the future of one of Oregon’s most beloved steelhead populations.

Mia and Marty Sheppard own Little Creek Outfitters and have been guiding on the John Day, Grande Ronde, Sandy, and Deschutes River since 2001. They take pride in connecting anglers to steelhead in the tradition of a swung fly.  They are also deeply committed to conservation and practice this on and off the water through catch and release techniques, recycling, and minimizing the use of plastic water bottles. They’re also supporters of conservation organizations, donating too Deschutes River Alliance, Trout Unlimited, California Trout, Oregon Wildlife Heritage Foundation, Casting for Recovery, Native Fish Society, Fly Fishing Collaborative, and Western Rivers Conservancy; contributing to the conservation of wild fish and health rivers.