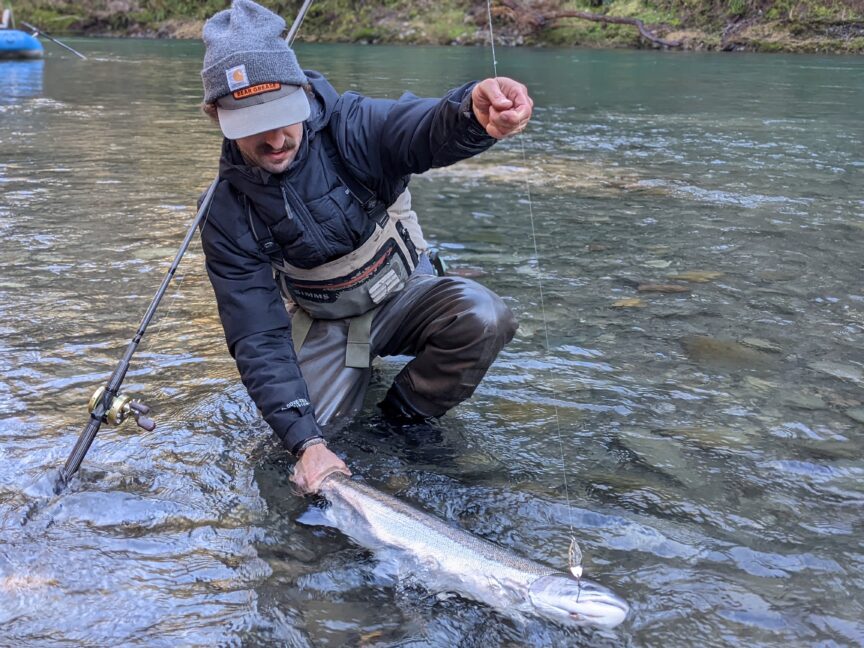 Unprecedented drought was the story for Washington’s coastal rivers this year, with generally low and clear conditions persisting through the majority of the wild winter steelhead season.

Ironically, there were historic floods in early January, but flows generally dropped from there. Soon, after one of the driest Februarys in memory, the Washington Department of Fish and Wildlife (WDFW) imposed an emergency shut-down of the winter steelhead season on March 1st.

WDFW cited data that only an estimated 30 percent of the forecasted return had arrived as part of the justification for this heavy-handed move, only after opening a season with a mixed-bag of regulations compared to the previous down year.

WDFW used commercial gill net harvest and creel data to make their determination about adult returns, and catch rates were reportedly low on both fronts. This is problematic for several reasons.

Creel data is collected by interviewing anglers as they leave the river about how many fish they caught that day. This process is fraught with difficult-to-manage variables. Some anglers are not truthful with fish checkers, while other anglers might not get checked at all. Where and when such data is collected is important for reliability, and some anglers thought the locations and times of these surveys were arbitrary.

WDFW also relied on gill net harvests, which were reportedly down in the surveyed rivers. This data also seems not very reliable, considering steelhead faced extremely low water conditions throughout the season and a little rain during the season might well have brought in more fish.

Contrary to WDFW’s creel data my informal polling of anglers suggests that prior to March 1 fishing was decent throughout the region, especially coming off the first high water. Even before that there were strong hatchery returns in some streams, which made for a nice transition into wild steelhead season. I fished throughout the region and found success most of the time, and so did anglers around me.

But here’s the thing: in this day and age we cannot equate good fishing to good returns. We’ve previously covered this here in a Science Friday post. But just from a purely ecological perspective, low water means defined water and a steelhead’s lie is easier to locate when the water is defined. In general, low conditions generally guarantee more time on the water, resulting in anglers on coastal rivers almost every day this January and February. It doesn’t take long for a seasoned angler to figure out every lie in a given stretch of river — and today’s angling technology allows even the greenest amongst us to find success.

Still, we will avoid unnecessary controversy and second-guessing of WDFW decisions if we employ better methods of collecting in-season data on wild steelhead returns. One is sonar technology, which is already being used on the OP’s Elwha and Dungeness rivers and more use of sonar is on the way in Puget Sound, being implemented as part of the Quicksilver Portfolio.

Similar to the technology you’d find in a Hummingbird fish finder, sonar is used to count adult fish that swim past a specific location in the river. It sends sound waves into the water (think of a flashlight beam) and if they hit an object (think of a steelhead) the waves or echoes bounce back and are recorded. Although some fish may pass back and forth through the sonar beam multiple times, overall this technology provides more reliable numbers than creel data and gill net harvests.

In 2016 and 2017, on the Hoh River, a project to use sonar technology for counting wild steelhead was spearheaded by John McMillan (Trout Unlimited) and Pete Soverel (The Conservation Angler), with support from the Wild Steelhead Coalition and Olympic National Park. These organizations provided funding to purchase the equipment, which WDFW ran for almost two seasons.

Guides and anglers volunteered to collect DNA samples and other information from the fish they caught, adding an extra category of data to the project to ensure life history diversity was recorded in combination with run size.

With funding for the project discontinued in 2018, the sonar was sent to a closet in Olympia, where it has sat idle for the last four years. A friend told me he heard a rumor it’s actually sitting on a pile of boxes containing unused copies of the Statewide Steelhead Management Plan, another underutilized tool in the steelhead management playbook…but I have yet to confirm that with the agency.

The point here is if we as anglers want to continue to fish over this last, best stocks of wild winter steelhead, then using tools like sonar will provide better data on fish return numbers in real-time and provide mangers with an opportunity to manage in real-time. But to be clear, it is not going to solve the problems wild steelhead face. In fact, in the short term the more reliable numbers that can be estimated with sonar may lead to even more limits on angling and possibly a total regional closure. But it is imperative that we have accurate in-season returns data if we want to have continued fishing opportunity in the future.

On a positive note, WDFW law enforcement officers were out in force this winter throughout the region. I was approached on two occasions and both times the encounters were brief and pleasant (I have been fishing steelhead here for more than 20 years and have been checked only a handful of times during those two decades).

The lack of enforcement on these rivers has been a serious concern for anglers and WDFW for a long time, so last year Wild Steelheaders United and Wild Salmon Center joined forces with the Wild Steelhead Coalition to donate $20,000 worth of equipment—including rafts, spotting scopes, trail cameras, drones and more—to WDFW Enforcement to help with their efforts on coastal rivers.

It seemed these measures had the desired effect. Outside of seeing a dumped bait box on the hood of a car and a few anglers clearly fishing closed waters, my observation was that infractions in season were down considerably. Anglers seemed to take the wade-fishing-only rule seriously and overall, the vibe on the river seemed less competitive. I think it is safe to say that the increased presence of enforcement officers and their new equipment contributed to this.

I think we can count our blessings for the season we had but should always be questioning WDFW’s methodology for making these decisions to close the season early or impose more restrictive regulations until more transparency is brought to this process. Unfortunately, there is a management discrepancy within WDFW between the various regions in our state around how steelhead are managed (ever wonder why we have winter steelhead fisheries in the lower Columbia or even the Skagit River?) and until there is more consistency brought across the regions, it’s OK—even encouraged—to have fish managers show us how they arrived at a decision.

While there are forecasting tools and models that can help develop fisheries, as anglers we should be more concerned about complete closures, rather than focusing on losing 1.5 months out of a 3.5-month season. We were able to fish a little more than 70 percent of a full steelhead season this past winter in a fishery with wild returns that were—according to the best available scientific data—scary-low.

The rivers of Washington’s coast remain one of the top three best places to fish for steelhead in the Lower 48. These waters are technical, and the steelhead are of the highest caliber. Fly anglers here often fish 9-weight rods and gear anglers prefer rods in the 8-17-lb. line class. Steelheading is an economic gold mine for this region and, quite frankly, is the crown jewel of Washington sport fishing.

Sustaining this opportunity means better conserving the fish that create it. In the short term, that may mean more restrictions and early closures while the WDFW, tribes, and other partners plan and work to rebuild these runs.

Right now, the WDFW is working with their Coastal Steelhead Advisory Group (CSAG), a 12-member committee that “reflects a broad cross-section of the coastal steelhead guides, research scientists, sport anglers, business owners, conservationists, and others who are committed to coastal steelhead recovery” to develop a coastal steelhead fisheries management plan. I feel fortunate to be a member of this group, contributing to the development of this plan, and creating a sustainable path forward for the steelhead and fisheries and communities that rely on them. Read more about the CSAG and their meeting schedule here.

I feel the plan we are developing in CSAG, and the budget request associated with it, is the last chance to get management tightened up and these runs tracking in the right direction. Otherwise, these fish will be following the same ESA-listing path as their Puget Sound counterparts did 15 years ago.