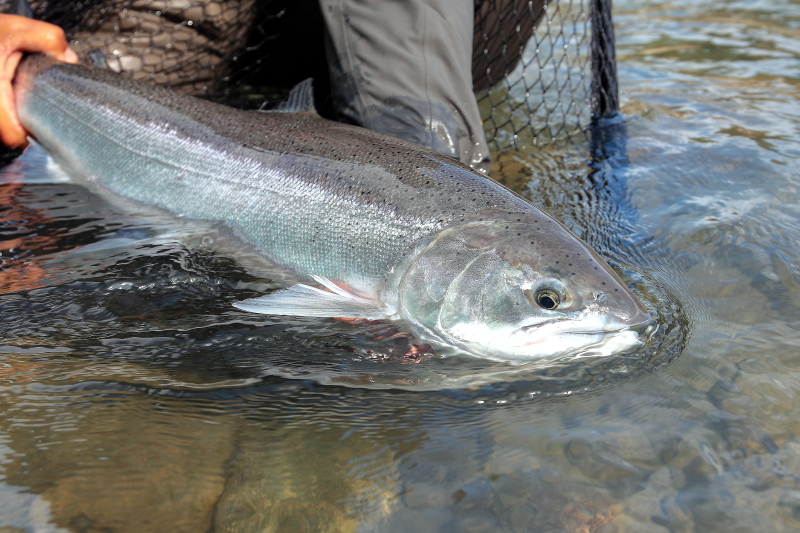 Science Friday is back, and we hope everyone is doing as well as possible during these trying times.

This week we hit on the concept of hyperstability. Hyperstability occurs when catch rates remain high even as fish populations decline.

Ever heard something like this: “Fishing was so great just a few years ago, and then they were gone”. Or, “The runs are fine, I’m catching lots of fish.”

We’ve all likely heard those sorts of remarks. But it seems counter-intuitive that angler catch rates could remain high while a fish population tanks. How is that even possible? And what if any implications does it have for management of our wild steelhead fisheries?

Today, we try to answer these questions by reviewing a recent experiment by Collin Dassow and several co-authors, which was published in the Canadian Journal of Fisheries and Aquatic Sciences.

While hyperstability has been found in commercial fisheries and other observational studies, this study used an experimental approach that is more effective at answering the question for fisheries that are primarily or wholly recreational.

Their experiment focused on largemouth bass in a lake in Wisconsin. Of course, bass are not salmon, trout or steelhead, but the underlying mechanisms are similar across species. And studies on salmonids – though not experimental – have found similar results.

To explore their question, each week the scientists changed the abundance of bass in the lake from a low of 25 fish up to a high of over 350 fish. Once per week three anglers fished from a boat for two hours in the morning and two hours in the evening. The anglers targeted the nearshore areas — preferred bass habitat — then recorded the location where each fish was hooked. The catch rates were then compared to the abundance of bass in the lake each week.

One might think that the anglers’ success rates would plummet as the fish numbers declined. But, not so fast!

First, catch rates were hyperstable. In other words, catch rates remained high and stable until only very few fish remained. That’s right, anglers had similar success rates whether there were over 350 fish compared to when there were as few as 50 fish.

Second, the most likely reason that catch rates were hyperstable is bass, like all fish, display a preference for particular habitats – usually nearshore areas where they can access both deeper and shallower water and find a variety of prey sources – and they tend to form loose aggregations, which is not surprising considering that fish often seek out other fish.

In this study, the bass did not necessarily aggregate around specific habitats per se, but they did display a tendency to hang out around nearshore areas. The tendency of bass to rely heavily on those areas, and anglers knowing this tendency and focusing their effort in those most productive habitats, was enough to allow anglers to continually have high catch rates even as the overall abundance of fish declined.

So, what does this have to do with steelhead? A lot, because the behavioral mechanisms for both fish and anglers are similar.

As steelhead anglers we know that steelhead prefer certain habitats and, like bass, often aggregate into certain places in rivers such as riffles and runs (and for summer run fish, deep bedrock pools). Our fishing success rates tend to increase the more we fish those areas and decrease when we fish more marginal habitats that are less preferred. In this way, our catch rates can remain high even if a population of fish is rapidly declining.

These results should not be surprising. As mentioned earlier, other observational studies have documented similar patterns of declining fish populations with stable angler catch rates. Of course, there can be variation among species in their relative susceptibility to angling (e.g., see this study), but even in those situations, angler catch rates can still be hyperstable.

Further, most fishery data suggests a similar pattern. For instance, my own person catch per unit effort (CPUE) remains relatively stable across big fluctuations in steelhead run size on the Olympic Peninsula.

There are some important implications for this type of research. I hear all the time on the Olympic Peninsula, even in years when steelhead numbers are way down, that fishing is good and there are lots of fish around. As one of the co-authors in the paper stated, ”It’s important for anglers to understand that what comes out of the water is not always representative of what lies beneath the surface. Even if the fish are biting, this doesn’t mean there are many of them.”

Moreover, the effects of hyperstability may be worse when fish aggregate for spawning, which is often what happens during winter steelhead season, for example. Because fish tend to aggregate, smart and intuitive anglers can figure out the places where fish are more abundant and focus their effort on those locations. Thus, angler catch rates can remain high even if the population is declining.

Importantly, by the time anglers notice lower catch rates, fish populations could already be quite small — and smaller populations tend to be less diverse and more difficult to recover than larger populations.

We don’t know the full extent to which hyperstability occurs in steelhead fisheries. It is likely more nuanced than with bass. Rivers are more complex than lakes and anglers of varying skills could influence the results. For instance, guides have very intimate knowledge of rivers and fish, and are likely to therefore be able to focus their efforts on the best places where catch rates could remain relatively high.

On the other hand, less experienced anglers, or those not as familiar with a river, may not achieve hyperstability. In my experience, this seems to hold true. My CPUE is lowest when first learning a new river, but then, after a few years, my CPUE reaches a peak and doesn’t fluctuate much until the run sizes sharply decline to very low levels.

There are opportunities to do this type of research on steelhead sport fisheries. Such work could help us understand if hyperstability can partly explain why anglers tend to have good success fishing almost right up until the fishery collapses. The takeaway here is, angler success rates don’t necessarily provide a good gauge of how many fish are in the river. So we need to be careful about assuming that our steelhead populations are stable and healthy — even if our catch rates remain high.