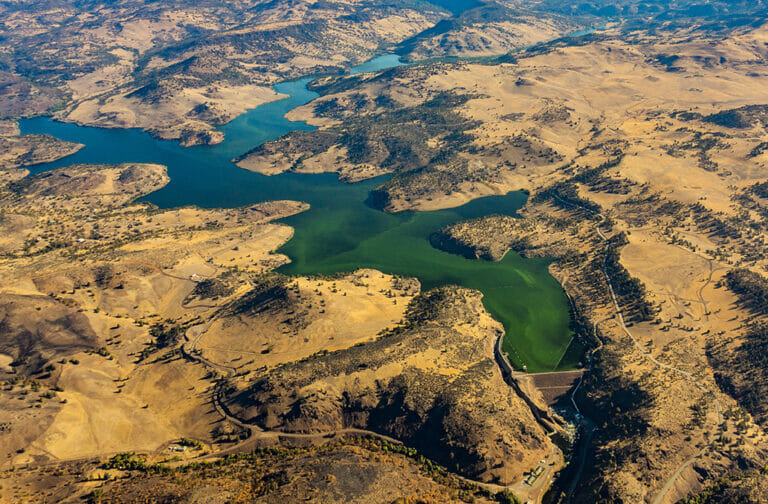 Part 3 of a series. This week, we’re telling stories about what happens when dams come out and life flows back in. It’s a vision of what could be on the lower Snake: a free-flowing river and wild fisheries staging a remarkable comeback.

The Klamath River, straddling the border between California and Oregon, is the third most productive watershed for salmon and steelhead on the West Coast. Historically, only the Columbia and Sacramento River systems produced more.

Years of stubborn drought, the current warming trend, and crashing anadromous and inland fish populations have all contributed to chronic water shortages in the Klamath Basin and ongoing tension between upper Basin irrigators, tribes, water managers and fishing and environmental interests.

The Klamath is Ground Zero for one of the most challenging water conflicts in U.S. history.

The Klamath’s legendary salmon and steelhead runs — and the commercial, tribal, and recreational fisheries they supported — are shadows of their former selves. The primary reason? Four old dams block fish passage to some 400 miles of good spawning and rearing habitat, cause months-long periods of hazardous water quality in the lower river, and foster disease that annually kills most salmon and steelhead stuck below the dams.

And yet, as dire as things are for native fishes in the Klamath now, we have great confidence, given the growing list of rivers where salmon and steelhead have come back when dams are taken out, that they can recover here as well.

TU has helped remove dams and restore fish populations from the Elwha and the Naches (a tributary to the Yakima River) in Washington to the Carmel River on the central California coast to the Kennebec and Penobscot in Maine. In all these waters there was a rapid resurgence of native fishes into upstream habitat.

Two major agreements, which Trout Unlimited helped negotiate, pave the way  for the same thing to happen on the Klamath.

The Klamath Hydroelectric Settlement Agreement (KHSA) provides for the transfer of ownership of four dams below Klamath Lake from the utility PacifiCorp to the Klamath River Recovery Corporation (KRRC) and the decommissioning and removal of those dams. The Klamath Power & Facilities Agreement (KPFA) formalizes the support of Congress for collaborative actions to advance the recovery of Klamath River fisheries, uphold trust responsibilities to the tribes, and sustain the region’s farming and ranching economy.

TU is a signatory to both agreements. And over the past year, our efforts and those of our fellow signatories paid off, as FERC approved the transfer of the operating license for the dams from PacifiCorp to the KRRC, for the purpose of decommissioning the dams and restoring the Lower Klamath Project reach of the river.

The Klamath dams are now scheduled to be removed starting in 2023.

But a comprehensive agreement for water sharing in the upper Basin remains unfulfilled, after Congress failed to authorize it in 2015. TU and other key stakeholders have since redoubled our efforts to achieve that agreement’s twin goals of greater water security for people and recovery of salmon and steelhead runs in the Klamath.

Those efforts synch to seventeen years of TU-led habitat restoration efforts in the upper Klamath Basin that are paving the way for the return of salmon and steelhead to a part of the system from which they have been excluded for more than 100 years.

Watch a short film on TU’s work in the upper Klamath:

We are racing to restore the Klamath River before its native salmon and steelhead and resident C’waam and Koptu populations collapse beyond the point where recovery is still possible. Beyond dam removal, we must also restore river flows and improve water quality, support Tribal sovereignty, and improve water management so the communities of the Klamath Basin can have water security in a future likely to be warmer and drier.

This can be done. We will need leadership from Congress to make it happen.

There is no time to lose.

Help us take the final step in removing the Klamath River dams.