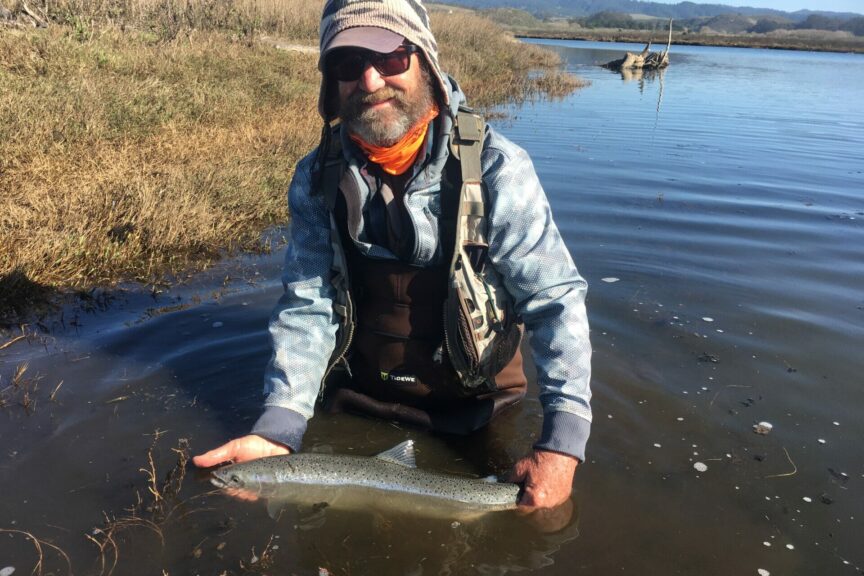 For six decades on famous steelhead waters such as the Trinity, Klamath and Gualala Rivers, fishing exclusively with a single swung fly, Frahm has made an art and science of bringing beauty to hand when other anglers are bathing in skunk.

His secret? Technical proficiency, sure. Frahm knows lines, leaders and flies intimately, and casts his single-hander with a pro’s ease and accuracy. But his ability to read water and divine where fish will hold, and to put the right fly where a seen or suspected steelhead will react—that’s what really sets him apart.

So it’s no surprise that he takes his steelhead conservation work seriously. This is personal.

Frahm’s love and respect for wild sea-run O. mykiss drive him when his restoration projects get snarled in bureaucracy.

Or halted by lightning, wildfire, and Covid infections.

Or when landowner partners start getting a little nervous about massive cranes swinging multi-ton pieces of concrete over their property.

Yes, all these things happened as Frahm shepherded to completion barrier removal projects on two critical tributaries to the Carmel River on California’s Central Coast. His work opened up nearly six miles of spawning and rearing habitat.

Asked how he stays motivated when buffeted by headwinds, he shrugs his shoulders. Success in fishing, Frahm says, is mostly a matter of keeping your line in the water. Just stick with it. So it is with managing complicated, multi-partner restoration projects in one of the most important watersheds for native coastal steelhead in California.

One of his biggest challenges is securing the funding for planning, design, and construction of a project. He leverages funding from a variety of sources in his steelhead work, not least federal programs, such as NOAA’s Pacific Coast Salmon Recovery Fund.

Thanks to last year’s passage of the $1.2 trillion Infrastructure Investment and Jobs Act, which included $172 million for the salmon recovery fund, Frahm and TU are in a position to make even greater strides on wild and native fish restoration in the coming years.

On the California coast between Santa Cruz and the famous Hearst Castle at San Simeon, no stream is more important for native steelhead than the Carmel River.

Working with the Steinbeck Country Chapter of TU, Frahm has spearheaded efforts to protect and restore the river’s run of wild steelhead.

Leaning on his background as a surveyor and Farm Bureau consultant, he gains trust and builds partnerships with private landowners and agricultural interests to accomplish on-the-ground projects that improve fish passage, water quality, water supply security, and dry-season stream flows.

His fingerprints are all over major conservation gains for Carmel River steelhead in the past decade, including acquisition and conversion of the former Rancho Canada golf course to a regional park, with water rights dedicated to instream flow, and completion of the No Name Road fish passage project on San Clemente Creek, an important steelhead tributary.

On Cachagua Creek, Frahm removed a concrete ford that served as driveway to the Valley Creek Mobile Home Park—the first barrier steelhead encountered when moving up Cachagua Creek from the Carmel mainstem—and replaced it with a sturdy bridge.

During high flows, steelhead could pass this ford, but at lower flows fish passage was impossible.

Conversely, crossing the ford when Cachagua Creek was flowing strongly was dangerous or impossible for residents of the park.

Although Cachagua Creek typically dries back during the summer months (Cachagua means “Hidden Water”), its upper reaches remain perennial and cool, and it is considered one of the most productive tributaries for steelhead in the entire watershed.

To complete this project TU wrote, secured and managed four state and federal grants, negotiated agreements with the landowner, sub-contractors and the Esselen Tribe of Monterey County, dealt with the pandemic and wildfire delays while overseeing delivery of 432 tons of material to this remote site.

The Cachagua Creek fish passage project, which took six years and cost $1.5 million, is a typical example of how restoration can benefit both people and fish. Three more projects upstream of this one are now on tap.

Also last year, Frahm worked in partnership with the Carmel Valley Athletic Club (CVAC) to remove the most problematic barrier to steelhead passage on Potrero Creek.

Potrero Creek is the first tributary available to Carmel River steelhead when migrating up the mainstem from the ocean. Like the Carmel and its other tributaries, the lower section of Potrero dries up during part of the year. Yet its upper reaches provide prime spawning and rearing habitat.

Access to this perennial, shaded, spring-enhanced habitat has been blocked by four barriers—two on CVAC land. Frahm got to work on the highest priority barrier for removal.

While Potrero Creek is a small stream, large heavy equipment including cranes, dump tracks, and backhoes was required to remove the old culverts,  install the new one, pour concrete and place boulders, and pave the new road. The old infrastructure was a pair of perched, 48-inch culverts. The new culvert is an arched design that will  improve fish passage and flood conveyance, as well as provide safe vehicle access across the creek.

This project took seven years and cost $620,000. This year, Frahm is set to work on a second set of barrier culverts on the property.

Frahm handles success, in steelhead fishing and in project management, much the same way. “When you’re done—with landing the 12-pound hen or with the project—you can be proud,” he says. “Then you move on. Set up for the next cast and the next project.”