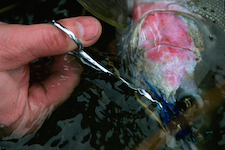 Two weeks ago we were on the Dean. This week we go even further north, to Auke Bay near Juneau, Alaska, for our next Science Friday post.

The greater Juneau are is home to several rivers that host wild steelhead runs. Auke Creek is perhaps the most important of these feeder streams, as scientists at the Auke Bay Marine Station have been operating a weir here for many years, which has allowed them to census returning adults and out-migrating juveniles for several salmonid species. This detailed level of data is relatively rare and can be extremely valuable to scientists who are trying to understand the biology of Pacific salmon and steelhead.

A long term data set beginning in 1963 showed a gradual warming trend in sea surface temperatures in Auke Bay leading researchers to wonder whether this would have implications for adult and juvenile migration timing. A paper published in 2017 by Christopher Manhard and others looked into this specifically. How did variations in sea surface temperature affect the migration timing of pink salmon into and out of Auke Creek?

Now, pink salmon are not steelhead, but this paper nonetheless has important implications for sea-run O. mykiss. But first, how did the scientists go about answering their question?

Early migrating pinks generally return to Auke Creek in mid- to late-August, while late migrating fish return in early to mid-September, although there is some overlap between the two groups. Rather than simply use a date to separate these groups researchers were able to establish a genetic marker that allowed them to assign individual fish to late migrating and early migrating populations.

For the duration of the study all adults which returned to Auke Creek were sampled for DNA at the weir. This weir also allowed scientists to capture and collect DNA from out-migrating juveniles. Researchers were then able to determine when fry from early and late migrating adults went to the ocean and how successful each group of spawning adults had been.

Prior research has already established that sea surface temperatures in Auke Bay are a primary driver in survival of pink salmon fry. Fry must migrate at the appropriate time in order to reach the ocean when growing conditions are favorable. Like Goldilocks they need the marine environment just right — too cold and they will not grow well, while if they arrive too late they will not have a long enough growing season to reach optimum size for long term survival.

Steelhead occupy an incredible range of habitats from glacial rivers…

Interestingly, the authors found that early migrating fish had higher rates of marine survival in nearly all years but generally produced fewer fry per adult. They suggest this was due the redds of early fish being excavated (biologists refer to this as redd superimposition) by spawning activities of late returning fish. This means that under “normal” cool conditions the benefits of migrating early did not necessarily outweigh the risk of having your redd dug up but were merely tradeoffs. When the ocean warmed only two weeks earlier, however, there was a huge benefit for early migrants.

In steelhead we can see a similar pattern with how migration timing is influenced by climates. Perhaps the best example of this is simply the gradient of winter steelhead return timing that exists from California to Alaska. Fish in the southern end of this range tend to return and spawn earlier in the year, while fish in the colder northern habitats enter and spawn later.

…to deserts of the Intermountain West and California

One difference between pink salmon and steelhead are the tradeoffs with early migration. Pink salmon have simple life histories with very little freshwater residence time and they generally spawn in lower rivers and creeks in large congregations. Thus they are much more susceptible to redd superimposition than steelhead, which spawn over a greater period of time and space making redd superimposition less of a factor. This means that early spawning may not have the same costs for steelhead as it does for pink salmon in Auke Creek.

Moreover, steelhead fry are subject to a suite of factors in the freshwater environment — sea surface temperatures are not necessarily a primary driver of fry survival. Yet early emergence of steelhead fry confers the same advantages of a longer growing season as it does for pinks. As our climate shifts and trends toward warmer spring and summer temperatures with lower stream flows, it is likely that early returning steelhead will be the most productive individuals. Unfortunately, due mostly to past management practices, in many watersheds early returning wild steelhead are the most depleted portion of our runs.

It is critically important that we maintain the genetic reservoirs that allow for diverse run timing in populations throughout the range of wild steelhead so that they can adapt to a changing climate. It is unlikely that late returning fish can adapt quickly; fish that return earlier will be needed to provide that specific genetic component so that our favorite fish species can remain abundant and resilient. This means managing our best watersheds for wild steelhead since they are the most genetically diverse and can better adapt to shifting climate and habitat conditions.

Steelhead from near the Northern end of their distribution