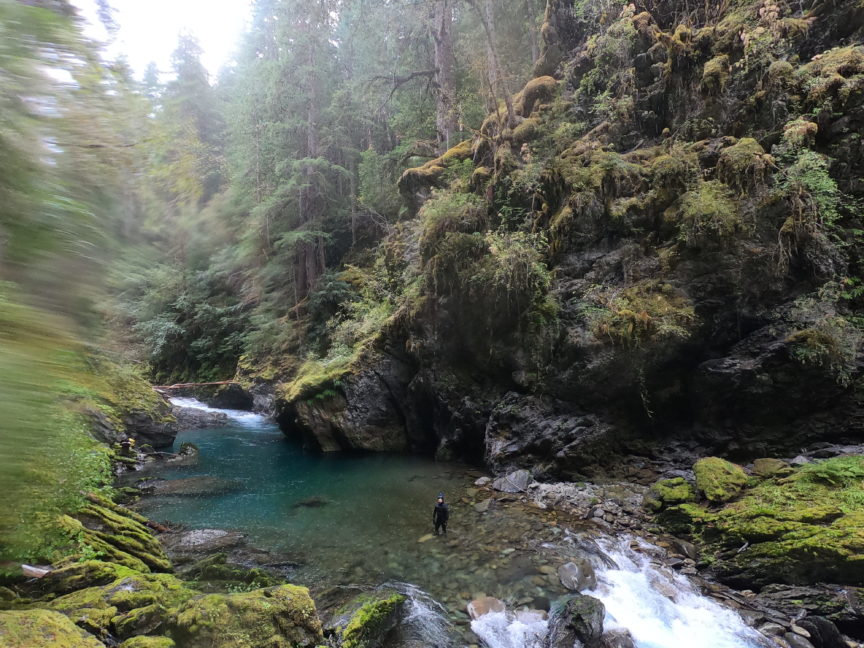 This is a special week for steelhead anglers, and others who care about the magnificent sea-run form of rainbow trout in its native range of the Pacific Northwest. On Friday, Wild Steelheaders United will launch a new film on the resurgence of summer steelhead in Washington’s Elwha River.

The Elwha River is the site of the largest dam removal project yet undertaken in North America. For more than a century two dams completely blocked upstream migration of anadromous salmon, steelhead and char here.

But taking out the dams changed their prospects—dramatically—especially for summer run steelhead, those mysterious and often much larger cousins of winter runs that were thought to be extirpated in the Elwha.

Wild Steelheaders United (WSU) hired noted documentary filmmaker and devoted steelhead angler Shane Anderson to record the amazing recovery of summer run steelhead in the Elwha. Rising from the Ashes is the result.

This film records the work of some of the leading players in the collaborative effort between resource agencies, Tribes, and conservation groups to monitor the recovery of salmon and steelhead and the Elwha. What they found, after undertaking a snorkel survey of the entire mainstem river in September of 2019, is remarkable.

Prior to dam removal there were some 100 to 300 wild winter steelhead in the lower five miles of the Elwha.

In contrast, the summer run life history was essentially gone. In recent years, scientists felt fortunate if they counted one or two adult summer runs, and there was no certainty that these were native to the Elwha—they could have been strays from other rivers.

But snorkel surveys over the past two years revealed that summer steelhead have staged a remarkable and unexpected comeback in the Elwha. In 2018, scientists counted over 200 adult summer steelhead. These were all wild fish, with preliminary genetic data suggesting they likely derived from resident rainbow trout that remained above the dams.

This surprising result generated a great deal of hope among steelhead scientists and advocates. Wild Steelheaders United and Trout Unlimited helped secure funding to continue the snorkel surveys. And in September of last year, WSU’s science director John McMillan joined with scientists from Olympic National Park, the Lower Elwha Klallam Tribe, the National Marine Fisheries Service, the US Fish and Wildlife Service and other stakeholders to conduct a snorkel survey of the entire main-stem Elwha.

This included sending a group of scientists into the headwaters of the Elwha, a roadless areas only accessible via a 20-mile hike, to survey some of the most rugged canyon habitat remaining in the Lower 48.

Again, summer steelhead provided the biggest surprise. Snorkelers counted more adult summer runs than they did in the previous year—quite a few more actually. And all but two or three of the fish had intact adipose fins, indicating they were wild fish.

In fact, these numbers suggest an even more impressive recovery of summer runs than of winter run steelhead in the Elwha, whose population has risen to between 1,200 and 1,400 fish since the dams came down.

But to learn just how many more wild summer steelhead they found, you’ll need to watch the film when it premieres on Friday on Trout Unlimited’s YouTube channel.

Rising from the Ashes highlights the marvelous ability of nature to rebound quickly, if critical elements of an ecosystem are restored. In the Elwha, while not all species have responded as quickly to the removal of the dams as summer steelhead, the overall trend is positive. Salmon, steelhead and char are all now widely distributed throughout the basin.

And summer steelhead, like the Phoenix rising from the ashes, are leading the way.

Wild Steelheaders United is an organization of wild steelhead anglers started by Trout Unlimited in 2014 that has become one of the most effective advocacy groups for wild steelhead from Alaska to southern California.