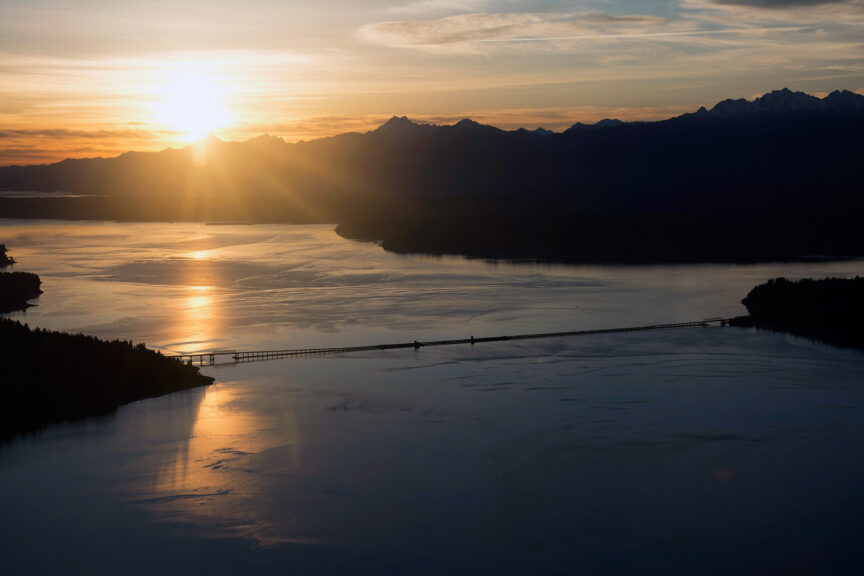 This week’s Science Friday is an update on a topic we have covered before: the effect of the Hood Canal bridge on survival of steelhead smolts passing through Hood Canal.

The Hood Canal is not a man-made canal but rather a fjord located in Washington’s Puget Sound. Several small to intermediate sized streams, such as the Quilcene, Duckabush, and Hamma Hamma drain from the Olympic Peninsula into the Canal. While these rivers were once beloved for their steelhead angling, today most of their steelhead populations are in peril.

In fact, these runs are so depleted now that the National Marine Fisheries Service (NMFS) collaborated with the Washington Department of Fish and Wildlife and the nonprofit group Long Live the Kings to implement a novel hatchery program to try to boost abundance. We covered that program and study in a previous Science Friday post.

The gist of the problem here is that researchers have linked the decline in adult steelhead in Hood Canal to poor smolt survival. Now, after six years of research, it appears pretty conclusive: the bridge is a problem for steelhead smolts. Here is a more thorough summary of the research, including illustrations and suggestions for solving the problem.

Why is the bridge problematic for steelhead smolts?

For one, juvenile steelhead tend to swim in the upper 10’ of the water column. The pontoons of the bridge are deeper than that, causing steelhead smolts to mill around the bridge looking for gaps they can swim through.

Second, the pontoons make passing difficult for steelhead for two reasons. The gaps between the pontoons are fairly small and, perhaps even more importantly, the structure disrupts the currents. The swift and swirling currents the pontoons cause can be difficult for juvenile fish to navigate and there is evidence – gleaned from some juveniles being planted with tiny transmitters that track movement, depth and water temperature — that some smolts become disoriented at the bridge.

For example, the bridge pontoons create eddies where juveniles gather, rather than continuing their migration out of Hood Canal. Consequently, up to 50% of the steelhead smolts die once they arrive in the area of the bridge. This high mortality is largely due to predators, which take advantage of the disruption in migration and disorientation created by the bridge.

Research indicates that birds and seals are eating the juvenile steelhead, presumably because the longer it takes them to migrate the more susceptible they are to being eaten.

As a result of this research, the Washington Department of Transportation (WDOT) is designing minor modifications to a few of the pontoons, with the goal of improving steelhead smolt survival. A full description of potential short-term solutions is available in the report, including adding small structures to the openings of the pontoons to reduce eddying.

Some $4 million dollars are needed to build the attachments for the pontoons, to add further modifications, and to monitor whether these actions deliver the intended result of improving smolt survival.

Those of us in Western Washington have been following this research closely for over a decade. We appreciate the hard work by all the scientists and the support of Long Live the Kings for this important effort. We offer a big ‘thank-you’ in particular to Barry Berejekian and Megan Moore at NMFS for their tenacity in studying the bridge and its effects on juvenile steelhead.

We will be tracking the progress of these efforts closely and lending support, where possible, to our partners at Long Live The Kings. The cost associated with these modifications are hefty in the state’s current budget crisis, but these modifications would drastically improve the survival of steelhead smolts. It would be a wonderful feeling to see healthier populations of steelhead in Hood Canal rivers.

Ultimately, this research highlights that steelhead smolt survival is not just about surviving the big blue Pacific Ocean, it’s also about what happens on their way there — and underscores how bridges and other human structures can have significant influences on waterways and the fish that migrate through or past them.