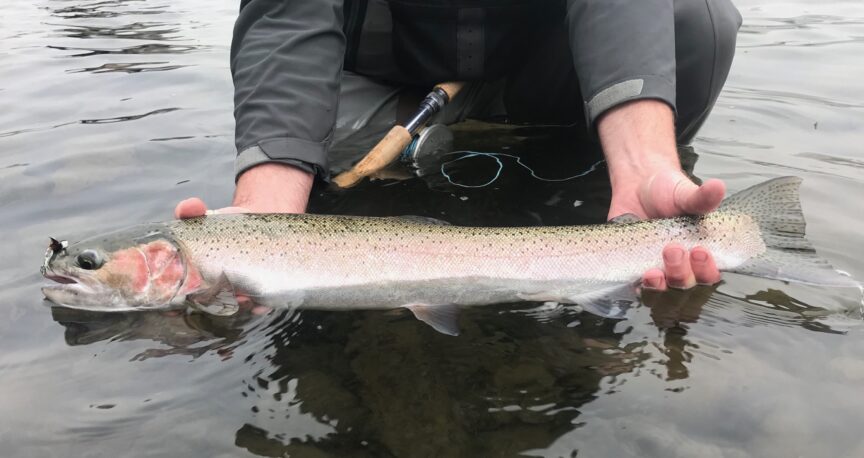 We’ve all heard it at some point: you should have been here yesterday. If you’ve spent enough time on the water, you probably find yourself regaling the “good old days” of abundant catches and trophy size fish.

This is especially true for steelhead runs in Idaho’s Snake River basin. Last year, the Clearwater River—famous for its large B-run wild steelhead—had one of the top five worst returns ever recorded. This year’s run, while ranking low among the 40 years of run data we have for the Clearwater, nonetheless represents a modest improvement over the 2019 returns.

This has steelhead managers touting this year’s run as “good.” While we would not characterize this year’s run in such glowing terms, it’s true, this season there are steelhead to be fished for and even caught. But let’s be clear— there are hatchery steelhead to fish for. Hatchery steelhead are raised and released in the Clearwater as mitigation for the impacts on wild runs of the four lower Snake River dams—the cost of doing business on the lower Snake.

These hatchery fish serve no purpose other than to provide angling opportunity, on the lower Columbia as well as in the Clearwater. Opportunity for tribal and sport anglers alike. And there is no reason for any angler to feel bad about fishing for hatchery produced steelhead, low run numbers or not.

Currently fishery managers are forecasting a steelhead run on the Clearwater that may rank as the fourth best among the ten-year average. With any luck we may be seeing a turnaround from some of the most underwhelming runs on record. We should be cautiously optimistic, though, considering that returns over the most recent decade represent one of the lowest 10-year averages over the past fifty years. You can’t slice it any other way. Steelhead returns to the Snake and Clearwater rivers have gotten progressively worse.

Below is a series of graphs showing the current run of steelhead over Lower Granite Dam, as compared to varying 10-year intervals.

Although performing a bit better in terms of Smolt to Adult Ratio (SAR) than their hatchery brethren, wild steelhead returns remain perilously low. Tools such as Genetic Stock Indexing (GSI), a form of genetic blueprinting which allows management agencies to identify fish from individual populations to estimate run size at Lower Granite Dam, allow us to document this fact. GSI estimates for the 2017-18 run year, for example, indicate that large wild steelhead—affectionately known as B-run steelhead—totaled just 263 individuals for the entire Snake Basin.

So there is still a lot to be concerned about (1). With so much variability in run numbers across the Snake and Clearwater watersheds, steelhead enthusiasts need to be extra cautious and considerate when handling wild fish.

At Wild Steelheaders United, we are dedicated to conserving and perpetuating wild steelhead runs— the cheapest and most durable way to ensure future angling opportunity—throughout their range. Hatchery supplementation is a Band-Aid at best and is proven to harm wild populations.

Please support our efforts, and learn more about our work defending wild steelhead in the Snake River basin and our participation in the Clearwater Working Group.