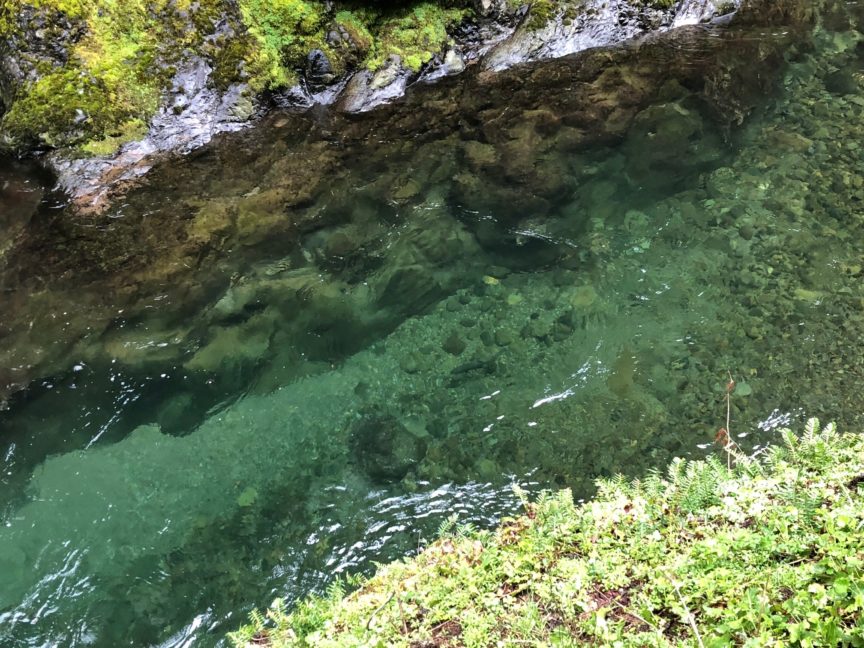 In these hard times, it’s uplifting to see a little good news like this morning’s article in The Statesman Journal detailing Willamette winter steelhead returns.

Willamette River wild winter steelhead numbers—once as many as 20,000 fish—fell to just over 800 individual fish a few seasons ago. It appeared this once robust run was about to go the way of the passenger pigeon and the dodo. Wild winter steelhead, as well as salmon runs in the Willamette, are listed under the federal Endangered Species Act and have continued to fade.

A variety of factors contributed to the massive decline of steelhead in the Willamette, among them dams blocking access to productive spawning and rearing habitat, the negative impacts of hatchery fish on wild stocks, degraded water quality and poor ocean conditions.

It’s difficult to do much, especially in the short term, to improve freshwater and marine habitat conditions and to mitigate the impacts of dams. But the Oregon Department of Fish and Wildlife identified another, major factor in the steep downward trend of Willamette River steelhead: California sea lions. These voracious pinnipeds responded to the dinner bell and were setting up at the base of the fish ladder and below Willamette Falls and gobbling up a much as 25% of the run.

ODFW tried to reduce the harmful effects of sea lion predation in the Willamette by discouraging and relocating the animals. But the sea lions quickly returned, hungrier than ever. ODFW then proposed to deal with the problem by euthanizing individual sea lions that were actively feeding on steelhead and salmon. The National Marine Fisheries Service—the agency responsible for conserving anadromous fishes—approved this limited program two years ago.

In 2019, nearly three dozen sea lions were euthanized under this effort—and it seems to be helping. So far, over the winter of 2019-2020, more than 4,000 wild winter steelhead have successfully negotiated Willamette falls and agency staff predict this year’s run will total over 6,000 fish.

While this is nowhere close to the runs we enjoyed in the 1980s, it’s a significant boost in the population.

A letter from TU’s then-Oregon Council chairman Terry Turner described our position in a short opinion editorial in the Statesman-Journal and is reprinted below:

Wild winter-run steelhead (rainbow trout returned from the sea) in the Willamette River are at a crossroads.

This past year, only 822 wild steelhead crossed Willamette Falls, by far the lowest run on record, and particularly worrisome considering that the long-term average is between 5,000 to 6,000 fish.

While many factors have contributed to the decline of these fish, there is a serious, and remediable impact occurring at Willamette Falls, where the number of sea lions has exploded.

The Oregon Department of Fish and Wildlife has advanced a proposal to cull some sea lions at the falls to reduce the severity of this specific impact.

While this action will not solve all the problems wild steelhead face in the Willamette River, it would provide the fish with some much-needed breathing room.

That is why Trout Unlimited supports this action. It is time for hard choices. Wild steelhead in the Willamette Valley have been in decline for 50 years. Today, their populations are so small that the increasing sea lion predation at Willamette Falls may well push them past the point of no return.

ODFW’s Population Viability Assessment suggests that if current sea lion numbers at the falls persist into the future, there is a 90 percent chance that at least one Willamette Valley wild winter steelhead population will disappear.

ODFW is in a tough spot. Wild steelhead in the Willamette are in real peril and declining fast. In contrast, sea lions are thriving. The agency is charged with keeping native wildlife from going extinct and they can’t make everyone happy.

That said, we agree with some of the critics of lethal sea lion removal that the plight of wild winter steelhead in the upper Willamette will not be reversed through this or any other single action.

To rebuild Willamette River wild steelhead, we need to take a comprehensive, science-based approach that addresses other major factors in their decline. Restoring their habitat, improving hatchery operations and fine-tuning angling regulations must be part of the long-term solution.

Many of these actions are underway, and we need to redouble these efforts. Otherwise, removing sea lions will only serve to delay the inevitable.

Culling healthy predator populations to help listed species in catastrophic decline is, and should remain, a tool of last resort. But that’s where we are with respect to wild winter steelhead in the upper Willamette River.

Conservation of endangered species sometimes involves hard choices. No ethical sportsman or sportswoman wants to see any form of wildlife killed if it’s not going to be eaten. In this case, culling a few sea lions in the Willamette River has paid immediate and significant dividends for steelhead and salmon. Please go here join Wild Steelheaders United and TU in working on the other factors contributing to their decline in the Willamette so that we need rely on this strategy only in the short term.