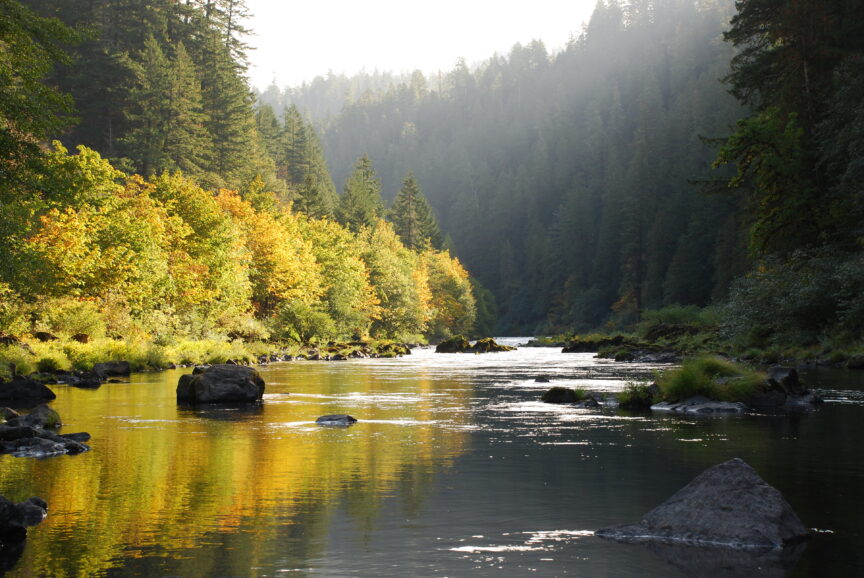 This past February, Senators Ron Wyden (D-OR) and Jeff Merkley (D-OR) introduced the River Democracy Act, which would permanently protect nearly 4,700 miles of rivers and streams in Oregon under the Wild and Scenic Rivers Act.

Wild Steelheaders United and Trout Unlimited strongly support this legislation, as it would safeguard some of Oregon’s most famous steelhead and salmon rivers, such as the North Umpqua River and the McKenzie, as well as headwater streams that are crucial to the overall health of watersheds.

The rivers and streams included in the River Democracy Act nurture steelhead, trout and salmon, support Oregon’s outdoor recreation economy and provide drinking water to communities across the state. Better conserving Oregon streams is critical to the future of our coldwater fisheries, rural communities dependent on the outdoor economy, and water quality for downstream agriculture and cities.

This bill reflects the strong leadership of Sens. Wyden and Merkley in addressing the threats of climate change to Oregon’s water sources and fisheries. “Our rivers and streams are some of the most special natural treasures Oregon has to offer and have always been integral to the health and vitality of our communities and rural economies,” said Merkley.

This leadership is evident in the innovative way Wyden and Merkley crafted this legislation. In 2019, Senator Wyden asked Oregonians to nominate favorite rivers and streams that should be protected as Wild and Scenic Rivers. Over 15,000 nominations were submitted, making it clear Oregonians value their rivers and want to ensure that future generations enjoy the recreational, economic and health benefits of intact watersheds.

The Wild and Scenic Rivers Act was passed by Congress in 1968 with the goal of protecting rivers with outstanding natural, cultural, and recreational values in a free-flowing condition for the enjoyment of present and future generations. Oregon currently has 2,173 miles of streams designated under the act. However, that mileage represents only 2% of Oregon’s 110,994 miles of rivers and streams, and conserves only a handful of the state’s best salmon and steelhead waters.

As Oregon and much of the West experience the effects of climate change — including more frequent and longer-duration drought — it is more important than ever that we protect headwater streams. Such waters reduce pollutants that flow downstream to larger rivers by filtering out sediments and excess nutrients. They also act as important spawning and rearing habitat, provide refuge for salmon and steelhead and attenuate high water temperatures by sending cold groundwater and snowmelt downstream, which provides relief for fish during heat waves.

(It may seem counter-intuitive, but it turns out that ephemeral and intermittent streams, which flow only seasonally or after heavy storms, provide essential function both ecologically and hydrologically. And such streams can qualify for inclusion in the national Wild and Scenic River system.)