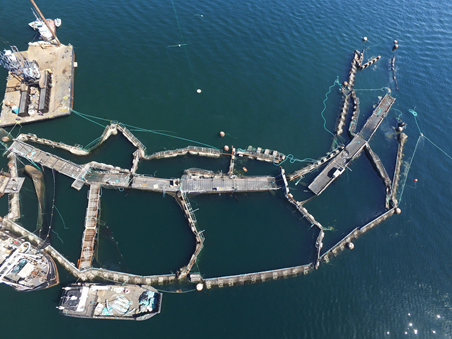 Conserving and restoring our wild steelhead runs requires a blend of habitat work, adjustments in management and angling policy, and advocacy from the angling community. As anyone who follows us here at Wild Steelheaders United knows, one of the issues we look at frequently is the impact of captive-hatched or reared fish on wild populations.

The science on this subject is well established and clear: O. mykiss hatched and/or raised in captivity don’t survive as well and weaken wild fish genetics.

So we look carefully at proposals that would add more captive-raised O. mykiss to any wild steelhead waters. And recently, we reviewed and commented on a proposal by Cooke Aquaculture to raise sterile rainbow trout in net pens in Puget Sound.

In 2017, some of Cooke Aquaculture’s fish farms collapsed off Cypress Island in Skagit County, allowing thousands of adult Atlantic salmon to escape. Quite a few of those fish were caught in the Skagit River by anglers and tribal fishers, and if you saw the photographs of those fish, you probably understand why we are very disappointed that the Washington Department of Fish and Wildlife granted Cooke Aquaculture a permit to replace those Atlantic salmon with triploid rainbow trout and to raise them in the same nets pens that failed previously in Puget Sound.

Triploids are sterilized rainbow trout. It’s good that they are sterile. However, the sterilization process is not perfect, so sterilization won’t be 100%.  If the net pens collapse again, any fish that isn’t sterile will have a chance to try and fulfill its ultimate purpose of reproduction. The fish likely would not have a lot of success spawning in nature, but given the status of Puget Sound steelhead it raises a question: Why would we want to undertake an action that could only further harm Puget Sound steelhead?

Wild steelhead in Puget Sound are already listed for protection under the Endangered Species Act, and run sizes are greatly depleted – representing about 2-5% of their historic abundance.  Recovering these fish will take a concerted effort, including improved survival through Puget Sound.  The fish farms will only make matters worse in the Sound.

For example, a large body of science indicates that – in addition to escapees – these types of fish farms are sources of parasites, disease and pollution. Just Google “aquaculture, Atlantic salmon, and sea lice” and you’ll see another reason why we recommended against WDFW granted the permit.

Overall, raising sterile rainbow trout in suspect net pens in Puget Sound – an area where resource agencies and angling interests have been working for years to bring back wild steelhead and salmon runs — doesn’t make sense to us at Wild Steelheaders United.  We are not alone in this perspective. Thousands of comments were submitted to the Department, most of which were against the proposal.

Given the current status of our wild steelhead runs, in Puget Sounds and up and down the West Coast, we must be very conservative in our how we manage their most valuable habitats, and strive consistently to eliminate or minimize factors that could degrade those habitats or interact harmfully with wild populations. Wild and hatchery salmon and steelhead are already struggling to survive their journey through the Sound. The Cooke Aquaculture permit has the potential to make things worse, which is why we believe the future of aquaculture is in freshwater — where the impacts can be better controlled and isolated. Stay tuned for more on this topic as the aquaculture process goes forward.