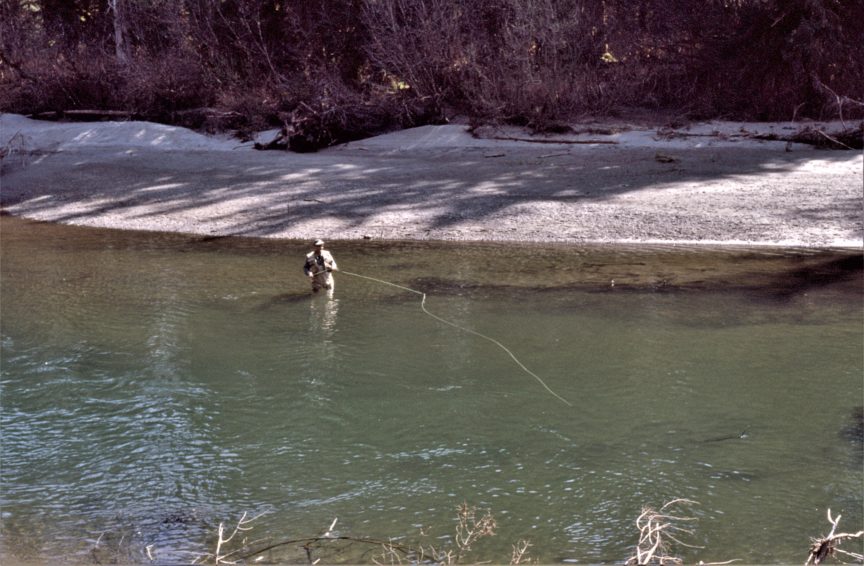 We are in the heart of winter steelhead season now. Some regions are experiencing poor returns of wild fish this year, while others are faring better. As steelheaders we ride the wave, from good years to bad ones and everything in between.

This week we are back with a Science Friday post on a recent study on wild steelhead in the Situk River, Alaska.

For those of you not familiar with the Situk, this river supports the largest known population of wild steelhead in Alaska and is free of any hatchery influence. Importantly, it also has the longest running set of biological data and scale samples for steelhead in Alaska, providing scientists a great opportunity to investigate a range of questions.

The study (https://afspubs.onlinelibrary.wiley.com/doi/abs/10.1002/nafm.10405) we review was conducted by Matthew Catterson (Alaska Department of Fish and Game and College of Fisheries and Ocean Sciences) and several colleagues. They analyzed scales collected from 525 adult steelhead over 11 years (1999-2012) to determine:

1. Were there correlations between juvenile growth and adult length?

2. How did age at maturity differ by sex and growth?

Here are some of their key findings.

First, the length of adult steelhead was not correlated with freshwater growth. In other words, the size of the fish as a smolt did not influence how large the fish was after going to the ocean and returning to freshwater.

Second, there was a positive correlation between smolt size and first-year ocean growth. In other words, larger smolts tended to grow faster in their first-ocean year and individuals that grew faster during their first year at sea were likely to mature and return earlier as adults.

This might have occurred because larger smolts can consume larger prey sources upon entering the ocean, thereby conferring them a growth advantage over smaller smolts.

One reason this could happen is because individuals that grow rapidly in their first ocean year may begin to allocate energy to development of sperm and eggs, which would leave less energy for growth in their second year in the ocean.

Lastly — and as reflected in many of our Science Friday posts — there were differences between males and females. Consistent with the findings of many other studies on steelhead, males tended to mature earlier than females. However, later-maturing males were larger as smolts than earlier-maturing males and they grew larger in overall length than females.

The results make sense in the context of reproduction. Generally, male steelhead tend to mature across a greater range of sizes and ages than females. One reason females mature later is they need the extra growth to produce more eggs, because the more eggs a female has the greater her chance at reproductive success – essentially she has more lottery tickets than her smaller cohorts.

On the flip side, males can mature at smaller sizes because they can “sneak” matings with female steelhead, while the largest individuals rely on aggression and violence to fend off those sneaky guys.

This study highlights correlations between freshwater and ocean growth in relation to life histories. Most importantly, steelhead are remarkably diverse and much of that diversity stems from differences in growth in rivers and in the ocean. Individuals that grow faster earlier in their ocean life tend to mature earlier and at smaller sizes, while slower growers in their first year tended to make up for that by growing faster in their second year in the ocean.

Similar patterns have been documented in steelhead populations across their range, but this literature improves our knowledge about steelhead in Alaska and suggests that successful biological strategies that are successful for steelhead in other regions apply there as well.

Ultimately, diversity in steelhead is related to their growth in freshwater and the ocean. Thus, conserving and rebuilding diversity in steelhead populations is vital to their persistence, resilience and abundance as a species. Populations that are more diverse and resilient are likely to provide better and more consistent fisheries, which is one reason that Wild Steelheaders United is always working to protect diversity by conserving key habitats and advocating for well-managed fisheries.

Lastly, as of early March we will have a new staff member joining the Wild Steelheaders United team. Part of this job will be to provide more interesting and enlightening content on our blog and social media feeds, on wide-ranging fishing, biology, and conservation topics. We are really excited about this new hire — stay tuned for an announcement on this soon.