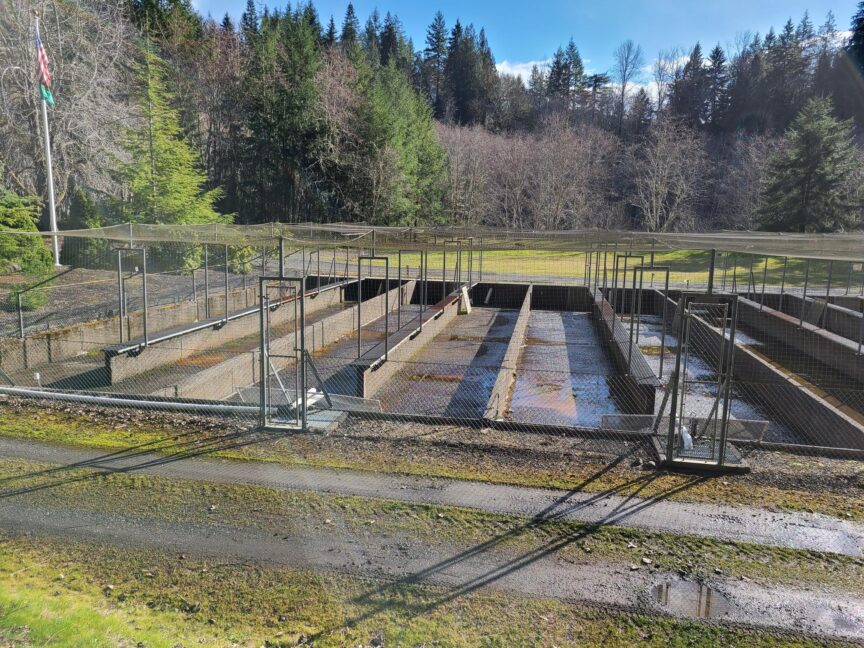 While hatchery Steelhead support harvest fisheries along the Washington coast, they also present ecological and genetic risks to wild Steelhead. With the current work by WDFW to develop a fishery management plan being completed in the Coastal Steelhead Advisory Group (CSAG) and now in light of the recent petition to list Steelhead on the Olympic Peninsula under the Endangered Species Act, it is more prudent than ever to ask how Steelhead hatcheries on the Washington coast are impacting wild populations.

The paper was based on modeling that Anja Huff (WDFW Biologist) and myself (Gary Marston) conducted between 2019 and March of 2022 (this was before I took my current role with Trout Unlimited) and was published by the agency in August 2022. Our work was designed to inform WDFW and the CSAG whether coastal Steelhead hatcheries were within the acceptable genetic risk thresholds designated in Washington’s Statewide Steelhead Management Plan (SSMP).

The SSMP, which was published in 2008, is supposed to be the cornerstone for Steelhead management in Washington State, but fourteen years later many of its key components remain unfulfilled, especially on the Washington coast.

The SSMP establishes provisions for genetic targets Steelhead hatcheries are required to meet in order to minimize impacts on wild Steelhead populations. Segregated hatchery programs, which use highly domesticated broodstocks with much lower fitness than wild fish, are designed to have as little interaction as possible with wild fish resulting in a requirement to meet a stringent 2% or lower geneflow threshold. In contrast, integrated programs are designed to incorporate wild fish into the broodstock, managing hatchery and wild fish as one population and as such are required to meet a 30% proportion of hatchery origin spawners (pHOS) and 0.70 proportionate natural influence (PNI) threshold to manage genetic risks and allow wild fish to drive the adaption of the overall population. Until this recent modeling effort that led to the white paper, the level of genetic risk posed by coastal Steelhead hatchery programs was unknown.

So, what does the paper tell us about where the WDFW is meeting its genetic thresholds? In short, there is a long way to go. Our work found that the majority of hatchery programs on the coast exceeded SSMP required thresholds and would require changes in operations or planting numbers to come into compliance with the guidelines established fourteen years ago.

Going forward if the agency were to only rely on reductions as their sole tool to manage hatchery production, there would need to be a reduction coast-wide of 262,000 fish released or about a 30% decrease in production. While this sounds extreme, 80% of the potential reductions are in two watersheds (the Wynoochee and Naselle rivers). Most other coastal hatchery programs would only require small reductions to align with the SSMP.

While reducing plants is one path to meet the genetic targets, the white paper also provided recommendations for additional hatchery reform actions that could also be implemented to reduce impacts to wild fish. In the case of the Wynoochee and Naselle rivers, these recommendations revolve around increasing homing to hatchery traps, as out-planting and poorly designed hatchery facilities appear to be the primary factors leading to high levels of straying to the spawning grounds, in these watersheds.

The white paper also shows that fisheries closures put in place to protect wild fish can result in significantly higher hatchery impacts if plants are not reduced or other actions are taken to remove hatchery fish from the spawning grounds. For example, the modeling in the white paper projects an expected 68% pHOS on the Wynoochee River because of the recent fisheries closures. Such a high level of hatchery influence can be expected to have negative fitness impacts on wild Steelhead, potentially countering the conservation benefits of a fishery closure. As such, it is essential that the agency fish managers drastically improve how they manage fisheries and hatcheries together and consider unintended consequences of fisheries management actions.

While this white paper represents a great first step in understanding where WDFW is in regard to meeting the hatchery standards in the SSMP, there is still a long way to go toward fully assessing hatchery impacts on the coast. The white paper acknowledges this, along with the limitations of the modeling work, and provides key recommendations to better understand the model limitations as well as hatchery management actions that should be considered for coastal programs. Importantly, several key knowledge gaps limiting the modeling work were highlighted in the paper, along with recommendation for next steps to gather the missing information.

Another key recommendation of the white paper focuses on the need for WDFW to evaluate the actual spawn time overlap between hatchery and wild Steelhead on the natural spawning grounds. Currently WDFW relies heavily on an arbitrary cut-off date of March 15th to assume the difference between hatchery and wild Steelhead. This cut-off date is particularly problematic for populations tied to integrated hatchery programs, which spawn at the same time as wild fish. As such, WDFW should consider alternative methods for differentiating hatchery and wild spawners. Additionally, investigations into the tradeoffs between integrated and segregated hatchery programs, such as overmining of wild fish for integrated programs and the consequences of early timed hatchery fish on the early component of the wild run, should be implemented.

Finally, because the SSMP’s risk thresholds are limited to genetic impacts, the ecological impacts of hatchery Steelhead on wild populations, such as predation, competition or disease remain poorly understood on coastal systems. Though not currently evaluated by WDFW, modern science makes it clear that these are also important ways hatchery fish impact wild populations and should be folded into future management decision-making. With almost a decade-and-a-half since the publication of the SSMP, it’s well past time for the actions laid out in the 2008 management plan to finally be implemented. With CSAG and the proviso plan nearing completion of its funded timeframe, and a potential ESA listing on the horizon for the OP, it is critical that the information provided in this hatchery white paper be used as a starting point to reform hatchery practices on the coast and protect struggling populations of wild summer and winter Steelhead.