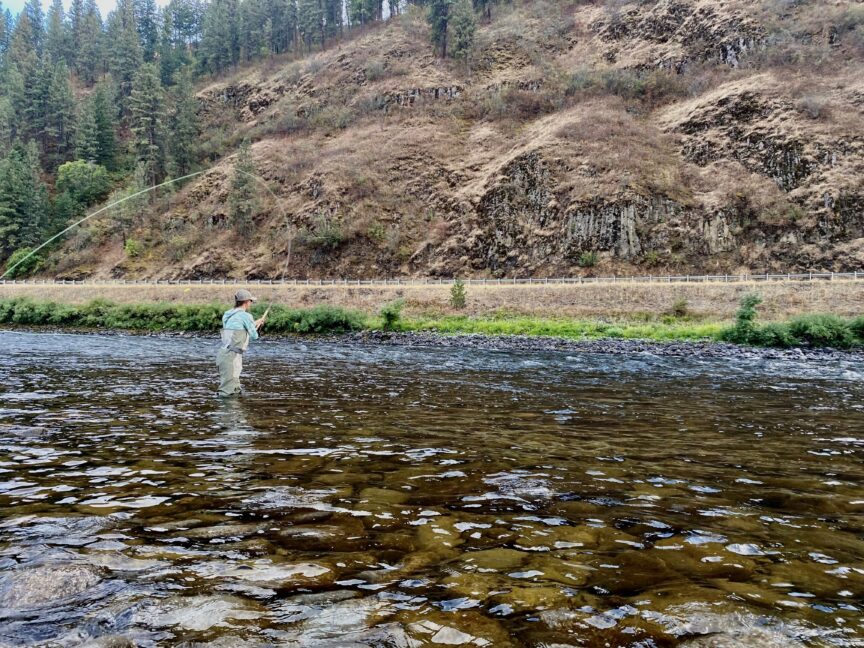 People often refer to rivers of the Northwest as some of the last truly “wild” places in the Lower 48. The Clearwater River in Idaho is one of those places.

The Clearwater is well known throughout the Northwest for its iconic salmon and steelhead runs, particularly its B-run steelhead that spend approximately two years in the ocean and average 31-34 inches in length by the time they return to spawn.

The river runs for 75 miles from the Bitterroot and Clearwater mountains on the border of Montana and Idaho down to Lewiston at its confluence with the Snake River.

Earlier this fall, I had the pleasure of gathering with some fellow Trout Unlimited staff at the Lenore Lodge on the banks of the Clearwater. We were joined by partners from The Flyfish Journal, Flylords, NRS, American Rivers, and local outfitters and photographers who traveled to Lenore to learn more about Trout Unlimited’s effort to remove the lower four Snake River dams, and of course, do some fishing.

From trolling for chinook at the confluence of the Snake or swinging for steelhead upriver, the Clearwater has it all.

Our crew took full advantage of the wide array of fishing opportunities.

As a newcomer to Spey fishing, I was anxious to get out and fish on some of the Northwest’s most iconic steelhead water. Thanks to the husband-and-wife team of Jerry and Terry Myers, long-time Idaho outfitters, Spey aficionados and Snake River Ambassadors for TU, I had two of the best teachers one could hope for.

The Myers have spent 40 years pursuing steelhead on Idaho’s Salmon River and advocating for anadromous fish. Their knowledge of the art of steelheading is inspiring to new steelhead anglers such as myself.

From the mouth of the Columbia River, Idaho’s salmon and steelhead travel over 800 miles and climb thousands of feet in elevation to spawn in rivers like the Clearwater. They not only have to pass through eight dams (four each on the Columbia and Snake systems), but also avoid predators along the way.

To gain a better understanding of the journey that salmon and steelhead face, our group spent a day visiting Lower Granite, the most upriver dam on the Snake River.

As an advocate for these fish, I have spent countless hours reading about and discussing Lower Granite, along with the other three Snake River dams. However, seeing one of the dams in person was unlike anything else I’ve ever experienced.

If you look at photos of Lower Granite, you will see the earthen portion of the dam, the lock, spillways, and powerhouse. Although they are the most obvious parts of the dam, they are just one piece of the puzzle. Driving over the structure, you can see the slack water reservoir above the dam that holds invasive fish that prey on out-migrating smolts.

On the southwest side is the fish ladder, counting station, and smolt bypass system. If you look closely, you will see hundreds of wires above the water downstream of the powerhouse to protect passing fish from the birds that gather near the dam for an easy meal.

In front of the earthen section are floating fish barges used to transport smolts through the 140-mile system of dams and slack water that was once a free-flowing river.

These mitigation devices are just a few examples of the lengths to which we have gone in our attempt to recover wild salmon and steelhead in the basin. Unfortunately, $17 billion spent later, smolt-to-adult returns remain dismal, and we are still failing to meet treaty obligations to Northwest Tribes, such as the Nez Perce.

Since time immemorial, the Nez Perce and these fish have been one. Fish and fishing have long been a focal point of tribal culture in the Northwest. Removing the lower four Snake River dams is necessary to meet treaty obligations made by the federal government and as Wheeler pointed out to us, these rights are guaranteed by the United States Constitution.

On the last day of our visit, we stopped by the iconic Red Shed Fly Shop in Peck, Idaho. The Red Shed, owned by Poppy Cummins, is a must see for all anglers who fish the Clearwater. Every inch of the shop is covered with spey rods, fly tying materials and photos of Clearwater steelhead memories.

The Red Shed and other businesses along the river rely on the return of these iconic fish each year to draw in anglers who contribute to the local economies they visit.

On our trip, I was lucky enough to encounter my first steelhead – a beautiful A-run wild buck. Whether you’ve had the privilege of encountering a wild Snake River salmon or steelhead or not, these fish are a vital symbol of the Northwest. If we hope to see their populations recover, fulfill treaty obligations to tribes and revitalize the region, we must remove the lower four Snake River dams. The future of these fish depends on it.