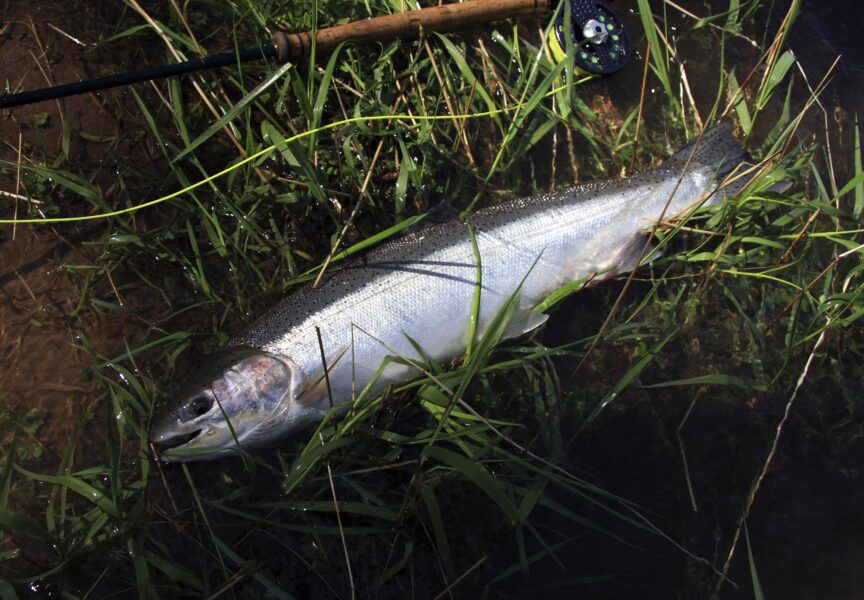 Let’s close out the winter of 2021 with a Science Friday review of a study on hatchery steelhead in Oregon’s Alsea River, conducted by the Oregon Department of Fish and Wildlife (ODFW) and the Oregon Hatchery Research Center (OHRC), in collaboration with fishing guides and anglers.

The Alsea River has two types of steelhead hatchery programs. One is a traditional program that only breeds hatchery fish, and the other is a newer “wild broodstock” program that brings wild steelhead into the hatchery, using both angler-caught fish and those fish that swim into the hatchery trap. The latter stocking program has become very popular among some anglers, probably due in part to data from ODFW indicating the newer broodstock program produces higher catch rates than the older, hatchery-fish only program.

These data beg the question of whether offspring of angler-caught broodstock would be more likely to be caught by anglers than offspring of adults that voluntarily swam into a trap. Aggression is partly heritable in fish and thus individuals that are caught by hook-and-line may be more likely to contribute to angler harvest, which is the goal of the hatchery program.

In fact, research on largemouth bass and other species of fishes indicates there is a heritable component to catchability. More aggressive fish tend to have higher metabolic demands, requiring them to feed more frequently, thus making them more vulnerable to angling.

In most watersheds, steelhead are not actively feeding during their migration and spawning life phase, but perhaps the trait would carry over from when they were juveniles or living in the ocean. In the Alsea River, then, scientists sought to answer two questions:

At the hatchery DNA was collected from each broodstock steelhead so researchers could track parentage, and adults were outwardly tagged so they could be distinguished to ensure that angler-caught males and females were not accidentally spawned with trap-caught males and females and vice-versa. The fish were marked differentially as juveniles and then released back into the Alsea River. In total, the hatchery produced 37,655 smolts in 2015 and 82,595 smolts in 2016, all of which were outwardly marked to distinguish them from the older traditional hatchery steelhead.

Genotyping success was relatively high for the returning adults that were collected by trap and anglers.  Researchers were able to assign both maternal and paternal parents with over 95% confidence to 87% of the samples.

So, did they breed better biters that produced more offspring?

What does this all mean?

There are several potential factors that could explain the results. For example, most previous “biter” studies have focused on fish that are actively feeding. More aggressive feeding behavior would presumably result in greater consumption of food and increased potential for growth. Adult winter steelhead are not actively feeding and are more focused on migration and breeding. It’s thus possible that steelhead with greater metabolic demands may indeed display different “biter” tendencies as juveniles and in the ocean, but that aggression towards food-like items may dissipate during the adult life stage – at least until spawning commences – because there is no caloric benefit.

It is also possible that differences in migration timing, duration in the river, and stream conditions may have influenced vulnerability to angling more so than aggression. And, the study cannot account for fish that were hooked and lost.

As to why the angler-caught fish produced so many fewer offspring, the authors hypothesize that stress associated with collection by anglers and transport possibly impacted the survivorship of offspring through epigenetic mechanisms. Epigenetics can change how DNA is read and expressed, and it is relevant here because stress can produce a wide array of epigenetic changes in DNA in animals – including reduced reproductive success. Lastly, angler-captured fish were held longer in the hatchery than trap-caught individuals, so greater holding time may have also increased stress and altered fitness in ways that are not currently understood.

Regardless of the causes, these results suggest hatchery programs are better off using traps to collect broodstock rather than anglers. This would represent a big change in rivers where broodstock are mostly or partly collected by anglers, but given the findings in this study, it is time to think about the potential effects of capture and to implement less stressful methods for broodstock collection.