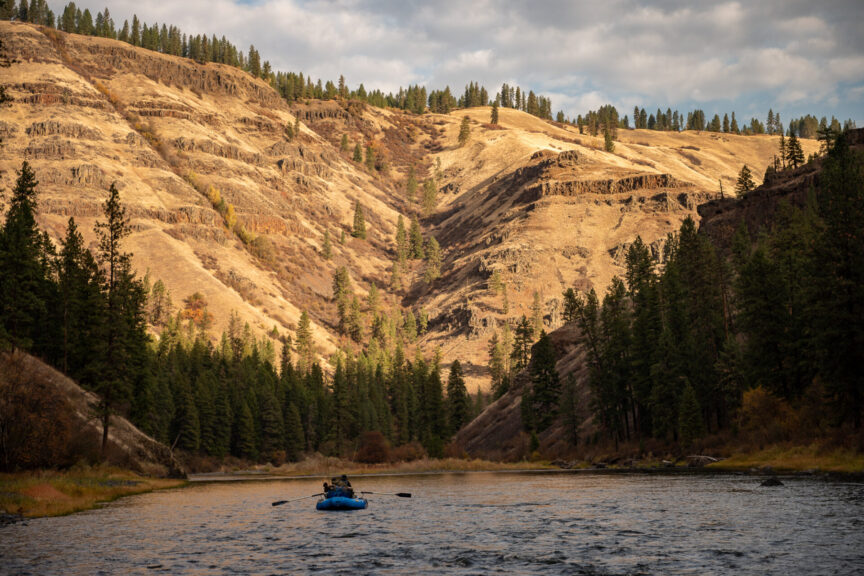 Caught in the crosshairs of this decline are the outfitters, recreation business and rural communities that rely on salmon and steelhead for their livelihoods. Outdoor recreation employs 500,000 people and contributes $57.5 billion to the economies of Idaho, Oregon, Montana and Washington. The industry is made up of countless small businesses and large corporations, rooted in communities big and small, reliant on intact public lands and robust populations of fish and wildlife.

Rep. Mike Simpson (R-ID) has stepped up to lead toward a more optimistic future. Rep. Simpson laid out a proposal that would create new clean energy sources, build new infrastructure, and ensure the needs of local communities, irrigators and shippers are met. The proposal would also restore runs of healthy, harvestable Snake River salmon and steelhead by removing the lower four Snake River dams.

These dams, located in eastern Washington State, have caused the near destruction of anadromous fish (fish that leave freshwater for the ocean, then return to their natal waters to spawn) in the Snake River basin. All of the lower four dams already have fish ladders and adult fish do pass over them heading upstream. Where the dams really kill fish is on their downstream journey. Smolt (juvenile salmon and steelhead) are forced to swim rather than drift backward as they do in a free-flowing river, letting the current carry them to the ocean. These small fish – carrying genetic code thousands of generations old that will lead them back to Idaho – die in turbines. They die in the hot, slow moving reservoirs above the dams. They die in the holding tanks of barges that attempt to move them past the dams. In fact, more than 50 percent of the smolt from Idaho never make it past the concrete barricades that are the lower four. So few smolt arrive in the ocean that adult returns to Idaho are barely over 1 percent. Of every 100 smolt that leave Idaho headwaters, only 1 makes it back to spawn. The science tells us we need 2 percent of smolt to return as adults merely to maintain population viability. Rebuilding our historic stocks will take a minimum of 4 percent returns.

For 50 years, we have tried barging, spill, hatcheries, and dozens of other mitigation efforts, but since the inception of the dams, we have never reached 2 percent returns. We have spent half a century throwing good money after bad, doubling down on a failed system while one of the most miraculous and prolific anadromous fish runs in the world circles the drain.

The best cold-water salmon habitat left in the contiguous United States is in the Snake River Basin. In fact, within the current, native distribution of salmon and steelhead on the west coast, the 30,000 miles of stream habitat in the Snake River basin represents 50 percent of all coldwater habitat. Take a second to really think about that. The Snake River Basin is 50 percent of pacific salmon and steelhead habitat in the lower 48. And it’s blocked by four aging, fish killing dams.

While removal of the lower four is fundamental to preserving our salmon and steelhead, it’s actually a small part of Simpson’s infrastructure proposal. The plan is also infrastructure development, salmon restoration and regional surety. It would give other dams in the Columbia systems legal surety far beyond their current permits, ­ a 35-year pass that many in the conservation community, myself included, are less than enamored with. Updating our infrastructure, boosting our economy, and saving our salmon and steelhead is going to require hard work and collaboration. It will also require compromise, because failure to act will only make things worse.