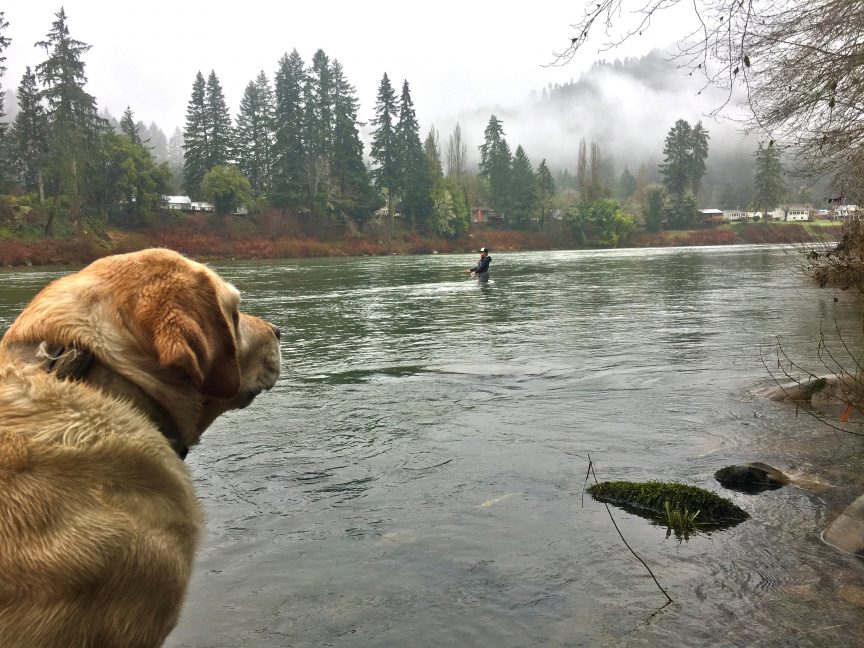 By the third day, it seemed a foregone conclusion that at least one of our three-person party would feel the chilly fingers of a stream no longer kept at bay by their waders.

The ubiquitous blackberry vines armoring the banks of rivers where we staggered for three days through steady rain and clammy mist made it inevitable. These vicious brambles raked our legs, hips and arms like cats having a rager around a scratching post. Even 3-ply Gore-Tex was no match for their sadism.

The irony that it was Jenny, the brightest spirit in our party—and the one with the brand-new waders—who drew that ticket hung heavy on Dean and me as the sodden moss draped from every limb of the ghostly alders, firs and cedars under which we tromped.

The rain synched its arrival with Jenny’s and my evening arrival at Dean’s basecamp on Oregon’s Umpqua River. Our first morning, the river was still green. Dean hustled us into his boat for a few hours of swinging flies along a gravel bar maybe a mile downstream, the rain whispering on our hooded heads.

After an hour or so, I caught a juvenile steelhead, perhaps 12 inches in length, more by accident than by skill, as I began the retrieve at the tail end of the swing. Jenny and Dean saw some fish boil. One bona fide adult powered out of the water at the bottom of the run.

But no grabby steelhead rose to our flies, Dean’s personal spin on time-tested patterns. Or if they did, their overtures were non-committal.

We trucked over to a different stream that afternoon. Despite the rain it still ran low and clear, its waters the hue of mint. Dean set me and Jenny up on a promising reach, then disappeared downstream to fish a trickier section. Perhaps 30 minutes later this lifelong steelhead angler and one of Oregon’s most accomplished fishing and hunting guides returned, shaking his head. “Had one on,” he said.

My offerings were politely declined. Welcome to winter steelhead fishing.

The next day, we had to work hard to deliver any offerings at all. It rained all night. Dean’s boat was half-full of water, and the Umpqua was rising, its color darkening by the hour. Dean figured our best bet was the Umpqua’s revered north fork, a 90-minute drive.

Fine company and conversation made the time pass quickly, but our first view of the river was not promising. In the flat light of the stubborn gloom, it looked about as fishable as a ditch full of mercury.

We drove into the canyon and began to pass fabled runs, gaping at the roiling brown torrent. Last year, the Archie Creek Fire torched much of the North Umpqua — and totally consumed the home of Frank and Jeanne Moore, legendary stewards of this river. The Moore’s are essentially godparents to Dean, and the passion of his long love affair with the North Umpqua is equaled only by his friendship with Frank and Jeanne. This three-way relationship fueled Dean’s years of advocacy to establish the Frank and Jeanne Moore Wild Steelhead Special Management Area—100,000 acres of public lands centered on Steamboat Creek, a major tributary to the North Umpqua—designated in 2019 for its wild steelhead habitat values.

But as we drove up the canyon, it appeared there wasn’t even a twig left capable of photosynthesis. And the rains were delivering countless tons of soil and ash to the river.

We made a pretense of casting at a couple of spots, but even above Steamboat Creek, which was doing its best impression of chocolate milk, the river was, in Dean’s typically laconic words, “a little pushy.”

Maybe my standards are wimpy compared to those of hardy denizens of the Pacific Northwest, but I would have described the perilous, turbid conditions somewhat differently.

We went higher up the river. Dean drove down a rough dirt track to a spot where it was maybe two feet wider, and parked. “People should be able to pass me,” he said unconvincingly. We skidded down yet another steep bank to the water, where it purled past a wall of dark basalt striated with columns and festooned with ferns.

We waded in. Dean told me to swing my fly in front of an obvious boulder. My first few casts failed to do so, but when I finally did, there it was: a grab.

But no loading of the rod ensued. I had missed it.

I consoled myself by analyzing the take. It hadn’t been a no-doubt-about-it steelhead smash. Perhaps it was only a trout.

I looked back at Jenny. She was leaning against a tree, the thick furry lichen on the boulders around her glowing florescent green in the dim late afternoon light, like some elfin character from the Lord of the Rings trilogy. She graciously pretended not to have noticed how my line had ever so briefly come tight, and then relaxed.

Our final day, every stream within a hundred miles of Dean’s place was blown. Except one. Dean explained that the upper reaches of this stream flow through public lands, which haven’t been clear-cut—a prime example of the benefits of managing land for watershed health as much as for commodity production. Indeed, the waters of this stream, while higher than ideal, were still green despite three days of rain.

We braved the vicious blackberry thickets again to access reaches so lovely that it was as satisfying to sit on a log in the relentless rain and mist and munch on Jenny’s trademark PB&Js as it was to cover water with a line and fly.

At one point, as I worked the tailout of a deep pool, a large adult steelhead porpoised about fifteen feet in front of me. But no amount of coaxing could prompt it to sample my fly.

Dean hollered from upstream as a steelhead took his fly, then hollered again a moment later as the fish released it. At another spot Dean had a nice fish on for perhaps a minute, his rod bowed and bobbing. But that steelhead, too, practiced detachment. Welcome to winter steelhead fishing.

Three anglers, three days, no steelhead swung to hand. Later, Jenny posted, “If the goal was to catch a steelhead, the trip was a fail.” But none of us felt anything like failure. Fishing with good friends for the chrome-bright ghost of Western coastal streams seemed less the primary goal than the primary excuse—to seek further what we yearned for that was, as Thoreau observed, not fish.