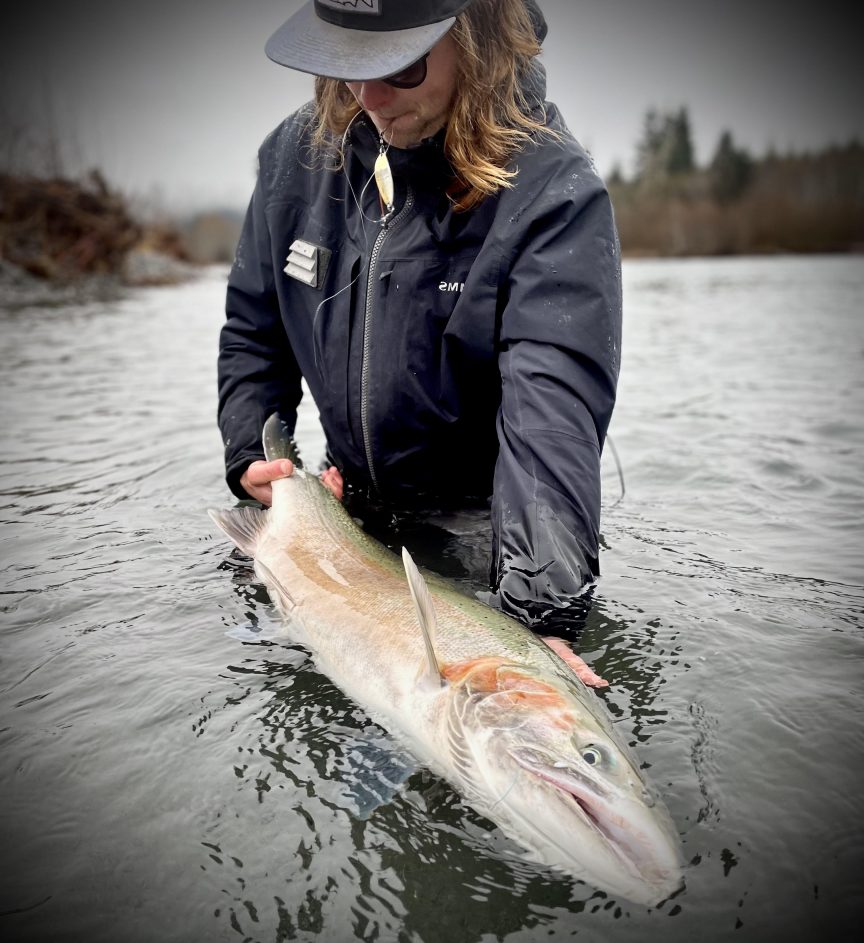 The new rules were no fishing from a floating device, single point barbless hooks, and artificial lures only. WDFW even put the kibosh on the old two-rigs-on-one-leader trick. These new regulations applied to every stream in this region, including such legendary waters as Hoh, Sol Duc, and Humptulips rivers and were intended to reduce angling encounter rates.

They succeeded. And if we are truly committed to steelhead conservation, we should all be happy about that. Anyone who thinks encounter rates of 1.5-times per fish per season (on some OP rivers) don’t have an effect on steelhead energy reserves and possibly spawning success is fooling themselves.

After the run size in Grays Harbor and Willapa Bay came up even smaller than projected, those rivers were closed early. An early closure on rivers in the northernmost part of the region went into effect the same day, moving the traditional closure date of April 15th to the last day in March.

The shortening of the winter steelhead fishing season was hard on anglers, guides, and local economies, but by far the most contentious management response to the poor returns forecasted this year was the ban on fishing from a floating device.

Being in the captain’s seat of a river boat has always been my niche. For some of us, using a pair of oars to set up the perfect drift is the stuff steelhead dreams are made of. That said, two modern-day steelheaders and an oarsman worth their salt have few obstacles between them and success.

Every nook, cranny, and hog trough will be thoroughly carved out. Every pocket will be probed and every run swept clean. Some of us will do this with two presentations through 10 or even 20 miles of river in a single day. Add a bead dropper or a bead off that yarn ball and suddenly four presentations are making their way through every inch of every lie. Add the newest and best steelhead angling technology and these critters will get caught.

I am accustomed to this style of fishing so the challenge presented by the new rules this season forced me to face an uncomfortable reality – that I have had my boot heel on the backs of these fish since the day I could row a drift boat. I am not going to pretend I don’t miss it. But I think it actually was a good thing for steelhead.

“Sooner or later quality fishing comes down to a limit on the number of participants and the things they are doing out there.”
-Bob Hooton

I spent the entire winter season fishing the Washington coast, where I have lived and fished my entire life. I am plenty familiar with the rivers here and bounced around quite a few this year. Being limited to fishing from the bank made managing time to cover water a challenge. Local knowledge excelled against this variable. Some sections of river hold steelhead year after year no matter how much they change; knowing these places was an advantage, to say the least.

My observation was that the angling pressure on the rivers I fished was cut in half this season. I had the most popular drifts on several rivers completely to myself. There is no doubt the local economy and guide community were impacted by this regulation. While I am not sure as to the extent of this impact, the guides I am acquainted with stayed positive and busy throughout the season.

Fewer anglers on the river may reduce encounter rates but it also reduces the number of potential advocates for steelhead. In times like these, when run sizes are so depressed, this seems an acceptable trade-off. I am positive that this season, with the new rules, a number of steelhead made it through to spawn without seeing a single hook, and that is nothing but good news.

And there were other benefits — the reduced angling pressure made the atmosphere more relaxed. Boat ramp conflict was at a minimum and other than some whining over the new rules, the general attitude on the river was positive.

One challenge I did not expect under the new rules was running out of bank just in time to get spooled by a slob. One day I lost a dandy whopper. The fish clamped onto my spoon at the top of a chute, just as big steelhead do, and immediately lost its mind. Somehow it ended up on the opposite side of the river thrashing in a few inches of water, only to flop back into the rapid and around the next corner. He left my girlfriend and me helpless on the tip of an island in the middle of the river.

All it would have taken to grasp that caudle peduncle was a quick assist from the raft. But for what? A picture or some bragging rights? The best part of the game is the first few moments of connection. I’ve learned to laugh away the heartache of losing a fine steelhead.

The running-and-gunning aspect of fishing from a floating device was minimized this year, too. All of us anglers were suddenly on a pretty even playing field. Most of us spent time picking water apart and slowing down. Being the lead boat was pointless. I found myself putting in well after daylight, taking my time and using slower methods like spoons, drift gear, and swinging flies. The new rules imposed a bigger challenge and certainly decreased our encounter rate, but we always seemed to find a few even so.

“We fish steelhead for the challenge. I don’t care how hard they make it.”
– Carson Churchill

Most of the anglers I know embraced the challenges imposed by the new rules as another obstacle worth beating fair and square. Personally, I felt the new rule made things more interesting and upped the ante. Sadly, this feeling was not shared by all.

Violations of the new regulations were common. Fishing from a floating device was rampant, unchallenged, and almost completely unchecked across the coast throughout the season. Excuses like “You got to do what you got to do,” “I didn’t get the memo,” or “You just can’t fish that river from the bank” were among many I heard this season. The greasiest among us spent time in lesser known tributaries and remote areas to flout the rules. Perhaps most disappointing was the number of guides who felt the new rules did not apply to them.

These anglers are not just breaking the law — they are cheating at the game and stealing opportunities from law-abiding anglers. Sure, more enforcement could have made a difference. Some rivers were monitored via drone, and a few citations were made, but WDFW officers are stretched far too thin to catch many of the bad actors and protecting steelhead is not their only responsibility.

Fishing and hunting require more self-control than other, less-consumptive outdoor activities. As a license holder you are required to practice “fair chase” and to make decisions that best support conservation of a precious and limited resource. Fishing teaches you many things, but maybe most importantly it reveals who you are when no one is looking. This winter steelhead season on the OP, some members of the angling community came up short in this regard.

Catch up on the new rules enacted by WDFW for the Washington coast this past winter steelhead season here and here, and learn more about why WDFW had to make these changes and how it was the best option for all anglers.