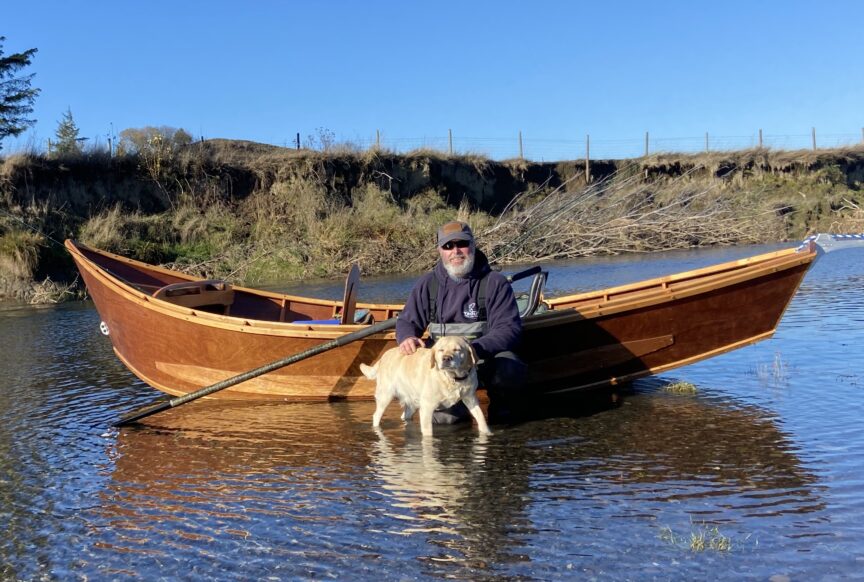 The thing about swinging flies for steelhead is that it’s remarkably unproductive. One wiles away entire days, even weeks, cultivating tennis elbow with nary a grab to show for it.

Yet the allure of fishing this way for the iconic sportfish of the Pacific Northwest is somehow inversely proportional to its ratio of success. At least that’s how it is for me.

I consoled myself with this thought recently, as I waded with precarious balance in stud-less footwear in Oregon’s Umpqua River, trying to determine how much sensation I could do without in my extremities while still retaining possession of my rod when I cast.

The weather was cooperative, which is to say it was alternatingly rainy and cold, damp and chilly, clear and crisp, or cold suffused with a fog so dense I had to speculate as to the location of my rod tip.

Like many such adventures, this one started with a photo. My workmate Dean Finnerty compassionately sent me an image of him kneeling in clear emerald water, under sunny skies, cradling a 12-pound hen bright as Christmas tree tinsel, with the caption, “The fish are in!”

Now, Dean knows the Umpqua as well or better than anyone. For many years he’s worked as a fishing and hunting guide while holding down day (and night) jobs as a cop and, more recently, as director of the Northwest region for TU’s Anglers Conservation Project. Dean’s a native Oregon son and has caught pretty much every kind of gamefish in every Oregon stream worth mentioning.

And don’t get him started on duck hunting. Or bear, deer or elk, for that matter.

So I took him at his word, and stepped into the Umpqua on the first day of my visit with full confidence. Dean’s instructions were specific: look for a grassy hummock sticking out of the water and fish the run adjacent to that feature.

So I slogged to the first clump of grass I came to and spent hours there, casting and cycling through the run, becoming ever less familiar with my fingers and toes and blissfully ignorant of the fact that it was not Dean’s clump of grass I was using as my reference point.

At length I decided a change of location was in order and staggered up the cobble bar, where I observed a second hummock of grass—this one distressingly far out in the river.

At about that time the sun leaned into afternoon and a filmy cloud cover condensed enough to wash out the light so fully that I could no longer see the slick globes of basalt that comprise the bottom of this river.

I nonetheless undertook to wade to the hummock. After what seemed an hour of sketchy movement reminiscent of David Byrne’s dancing, I made it.

A riffle funneled the middle of the river into a deeper section with underwater boulders, creating perhaps fifty yards of perfect “nervous water.” I shimmied up and down this run, swinging a black leechy fly (per Dean’s instructions) and now even more confident that a steelhead would rise to it.

My confidence was misplaced. Cast after cast yielded only the pure solitude of an angler in the middle of a glorious Western river with no one else around and the water whispering sweet nothings. I began to fantasize that, as my fly bumped a boulder every now and again, it was a fish expressing interest. I also began to think I should call the Dean of the Umpqua for some academic assistance.

Dean is the most humble and gentle of instructors. You would never guess this devout individual, beloved family man and wizard with any sort of hand or power tool, spent decades in too-close proximity to bad guys. But after nearly pitching my phone in the drink I discovered I did not have sufficient reception to call him.

What was left of the sun slipped behind the conifer-cloaked ridge defining the southern skyline. The temperature dropped a few degrees. My empty stomach began to grumble. I decided to make a few more casts and call it a day.

I managed to unload a proper cast with my 7 wt. one-hander and followed my line with my rod tip. I felt another boulder bump. I swung the rod slightly to mend the line and it came tight.

I had not had a snag all day. Of course I would snag up now, on my last cast.

I made to break off the fly—and suddenly my line began to move.

It moved so slowly that it took me a moment to grasp what was happening. I believe I uttered the standard expression all anglers rely on in such circumstances, which is, of course, “Holy Toledo!” Except you don’t use the word “Toledo.”

Miraculously, I made a proper set. Immediately a large steelhead launched from the water so distant and at such a strange angle to my where my line met the water it seemed impossible that it could be related to the fish now engaged with me. Then line began to race off my reel.

What ensued was five minutes or more or acrobatics, both on the fish’s part and on mine, as the steelhead displayed its singular power and glory while I tried to wade backward into shallow enough water that I could perhaps actually land the rhino at the end of my line.

Then, as mysteriously as it had gone taut, my line relaxed. I reeled up, ruefully inspected the new angle of the hook, and dragged my sorry self to Dean’s place.

That evening we stood around a fire pit nursing Coors Lights. Dean’s new hand-built drift boat gleamed in his workshop a few paces away. I ran my hands over its varnished surfaces, admiring the quality of its materials and the craftsmanship of its construction. Dean’s eyes misted as he told me of his labors on it.

There are few guarantees in life, and almost none in steelhead fishing. There can only be one name for a boat like that, brought together with consummate care in troubling times. It can only bear the name of one’s wife of thirty years, Brenda Gail, gone now less than a month, after a long fight with cancer.