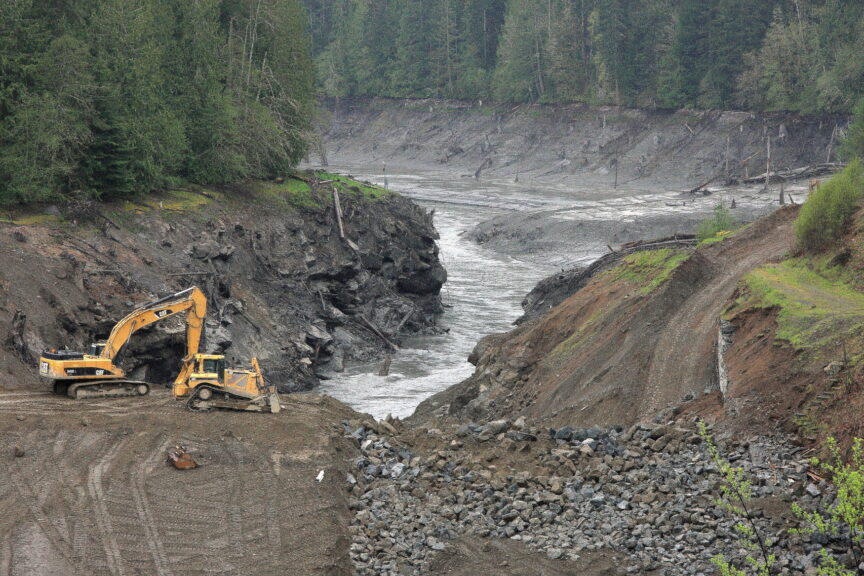 Washington’s Elwha River is celebrating an important anniversary today. It’s been ten years since the start of deconstruction of two dams in the Elwha that blocked salmon and steelhead from returning to the majority of habitat in this remarkable watershed.

Since the dams were removed, the Elwha has become an international showcase for the benefits of dam removal for anadromous fish. In particular, the summer steelhead population in the Elwha, as documented in our film Rising from the Ashes, has been incredible.

So we want to celebrate the 10-year occasion.

We start our celebration by thanking the Lower Elwha Klallam Tribe (LEKT) for their decades of hard work and persistence in pushing for dam removal on the Elwha River. This is the Tribe’s homeland, and the project would never have happened without their support.

We also want to thank scientists and staff at LEKT, Olympic National Park, the National Marine Fisheries Service, the U.S. Fish and Wildlife Service, USGS, Washington Department of Fish and Wildlife, U.S. Department of Interior, Keith Denton, and others for all their monitoring and studying of the river and of the response of salmon to dam removal. Many agencies and organizations have been involved in the collective effort to take out the dams and bring salmon and steelhead back to the Elwha — if you want to learn more, please visit the Olympic National Park’s website and peruse their documentation.

In 2021 Wild Steelheaders United worked with LEKT and National Park biologists to conduct a third consecutive year of snorkel surveys in the upper Elwha River. The goal is to enumerate adult summer steelhead, bull trout, and rainbow trout, and to keep an eye out for other species, such as Chinook salmon. Such surveys require a lot of effort in a watershed as rugged as the Elwha. We hiked over 40 miles in three days and snorkeled several stream-miles, but it is always worth the effort in terms of data collected. These are a true collaborative project, made all the more difficult by COVID, which has required lots of restrictions and extra effort.

In terms of fish, the Elwha survey results reveal variable numbers year-to-year, which is expected. This is a pink salmon year (pinks run every two years at this latitude), and biologists are seeing better numbers of pinks this year than in previous years. However, steelhead numbers appear down, as they are across much of the West Coast this year. Nonetheless the river seems in good shape and the rain we are getting recently should help move the fish around and push some of them into smaller tributaries, which were too low to enter over the past few weeks.

Regardless of the variable population results thus far, it’s now clear that dam removal on the Elwha has had a positive impact on the river, fish and macroinvertebrate life. The main-stem Elwha below the dams became choked with fine sediment during and following dam removal, though sediment loads are now at what scientists consider to be normative levels. Research indicated the initial flush of sediment dramatically reduced the abundance of fish and insects in the river below the dams. But today, ten years after, we are seeing a sharp resurgence in many salmonids and a big increase in insect production. Essentially, the river is back to looking like a normal river, and the fish and insects are taking advantage of the more stable environment, and thanks to the new source of sediment, there is now a new series of sandbars and lagoons for juvenile salmonids at the mouth of the Elwha (Read more about this research here).

Moreover, bull trout and summer steelhead have shown a remarkable increase in abundance since dam removal.  Not only are bull trout more abundant, they are also larger, and many fish are now migrating to the ocean and then back up above both dams into the headwaters where they spawn (Read more about this study here). The summer steelhead life history was nearly extirpated prior to dam removal. Each year, I counted only 1-3 adult summer runs below the dams. Some were stray hatchery fish, others were unclipped, but we were unsure of whether they were originally from the Elwha or from somewhere else. Now, the summer run population in the Elwha is the largest population of summer runs on the Olympic Peninsula and is likely the largest population along the entire Washington Coast. The response of both species underscores that dam removal can be a critical strategy for increasing survival and resilience of formerly depleted stocks of fish.

Much of the impetus for dam removal on the Elwha was the opportunity to restore the fabled runs of large-bodied Elwha River Chinook salmon. These fish were rumored to exceed 100 lbs in size, and discussions with members of the Elwha Tribe indeed suggest the river once supported very large Chinook. Today, nearly all Chinooks in the river are derived from a hatchery, which helped sustain the original Elwha genetics after they were unable to migrate past river-mile five, where the Elwha Dam was located. Since dam removal, the Chinooks have produced very few natural offspring, presumably because they mostly spawn in the main-stem Elwha below the dams, and their redds and juveniles thus experience very difficult conditions. Recently, however, Chinooks have started to turn things around. The abundance of naturally produced Chinook smolts in the Elwha has sharply increased, and we are starting to see more diverse juvenile life histories than we did prior to dam removal. All of this bodes well for the future.

We conclude our celebration of this occasion by giving another shout-out to videographer Shane Anderson and the film he produced for us in 2019. Rising from the Ashes vividly documents the potential for dam removal to jump-start anadromous fish population recovery, and more broadly how big conservation actions can unite people towards a common goal. On the Elwha, the goal was to restore the river and rebuild endangered stocks of salmon, steelhead and char. Only a decade into this project, both the river and these species are showing signs – sometimes dramatic —of recovery.

Still, the Elwha’s native fish are not out of the woods yet, so to speak. It will likely take decades before the populations reach stasis and achieve a durable natural cycle of production. That is okay, however, because LEKT and National Park and the other stakeholders in the Elwha’s recovery are in it for the long haul. Today, we appreciate and honor that dedication — and the slow but promising evidence that the Elwha can once again become the anadromous fish factory it was before the dams were built more than a century ago.