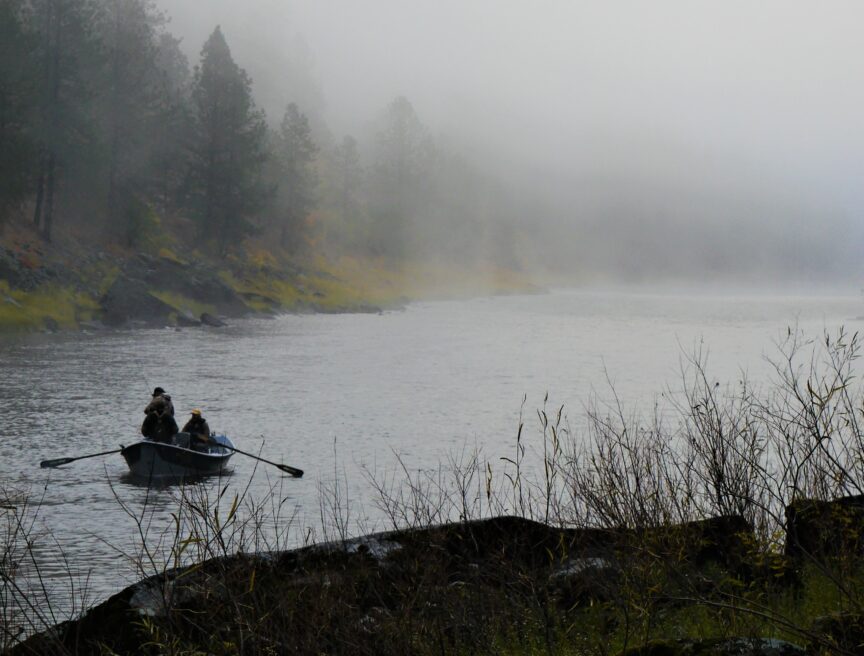 The Northwest is experiencing the worst summer steelhead returns on record. Steelhead stocks from British Columbia to southern Oregon and as far inland as the Snake River basin are doing poorly. The rapidly changing climate is exacerbating systemic issues like the lower four Snake River dams and other fish passage challenges. Sadly, we are likely to see greater variability in run sizes, with smaller peaks and deeper troughs.

Steelhead in the Columbia have experienced some of the worst depletion. As of September 8, only 46,942 steelhead have passed over Bonneville dam – the lowest number since 1938, when dam counts were initiated. Historic runs numbered in the millions.

Outside of the Columbia Basin, even the fabled North Umpqua River, long known as a steelhead stronghold in Oregon, is struggling. So far this year, less than 70 wild steelhead have made it into their spawning tributaries at Canton and Steamboat Creeks.

While a changing climate is a major factor in these declines, there are actions we can take to preserve stocks, most urgently by strengthening connections to pristine cold-water spawning habitat in the Snake Basin via the removal of the lower four Snake River dams. Additional short-term actions like reduced take can help mitigate the impacts on wild fish.

In Oregon, it’s a grim situation for the fish and for anglers, guides, and managers. In August, Oregon Department of Fish and Wildlife (ODFW) enacted an emergency closure on the North Umpqua. The decision to close the fishery until December 1 was led by Greg Huchko, ODFW’s regional fish biologist on the Umpqua. This will mark the first time in history the North Umpqua has been closed to steelhead angling, but nevertheless, it was the right decision in these unprecedented times and one we at Wild Steelheaders United (WSU) support.

On August 27, ODFW released its emergency fishing closure decision in the Deschutes and other mid-Columbia tributaries, including the Umatilla, John Day and Walla Walla Rivers. Most of these closures will be in effect until December 31. “We’re in uncharted territory here,” said Shaun Clements, ODFW Deputy Administrator for the Fish Division. “The combination of a historically low run, on top of multiple years of low runs, and the very poor environmental conditions that seem likely to continue based on the most recent drought forecast, mean this is a regional problem.”

Clements is right. This is absolutely a regional problem, but what are the other Columbia Basin states doing about this issue?

This week, the Washington Department of Fish and Wildlife (WDFW) made some changes which include:

Because of the lower four Snake River dams, Idaho was forced to close seasons and wild harvest decades ago. Idaho has not allowed harvest of wild fish since 1983, limiting angling to mainstem rivers with many of the state’s most productive anadromous f runs (like the Middle Fork of the Salmon) have been closed to fishing since shortly after the construction of the Snake River dams.

Under the current crisis, Idaho Department of Fish and Game (IDFG), appear to be focused on returning hatchery fish for their future brood needs with little consideration given for the precipitously low returns of wild A- and B-run wild steelhead.

The regulation changes implemented by IDFG this week reduces bag limits of hatchery steelhead to one fish per day in fisheries in the Snake, Salmon, and the Clearwater River below Memorial Bridge, through December 31.

In an article last month in the Lewiston Tribune, Joe Dupont, regional fisheries manager for IDFG at Lewiston recognized that, “one could argue at least for this date, this is the worst steelhead run past the Bonneville area ever.”

But in a blog post released last week by DuPont and IDFG, which provides a more in-depth look at the steelhead and salmon returns and agency action, DuPont’s statement seems to show little concern for what he stated could be the worst steelhead run ever.  “Despite the down return of steelhead that are destined for the Snake and Salmon rivers, it looks like this fall will provide a good diversity of fishing opportunities for steelhead, fall Chinook Salmon, and Coho Salmon. Good luck!”

We encourage IDFG to take a more cautious approach to conserve and protect wild steelhead. IDFG estimates a 5% catch and release mortality rate that does have impacts on wild fish, particularly in years with such low returns.

We Must Do Better

Too often, agency staff stay with the status quo, pressuring the fish populations right down to the bare minimum outlined by the Endangered Species Act (ESA) and administered by NOAA. And, they appear too frequently concerned with hatchery fish, rather than the wild fish, which should be a concern to anglers, because if wild fish become more depleted, we could see some fish populations upgraded to Endangered rather than Threatened under the ESA. That would not only be bad news for anglers, but also for all the landowners that live in those areas.

We here at WSU and Trout Unlimited (TU) strongly support the recent closures in Oregon and Washington and applaud the commissioners and agency staff tasked with making these changes. We know these decisions will negatively impact anglers (this includes all of us here at WSU), guides, and the many local businesses that depend on the economic support of the fishing economy. That ramification is not to be taken lightly, but if we want these fish to be around in future years, then we must insist that the agencies tasked with making those tough calls do it. I call on our elected officials to immediately begin a process to provide disaster relief for businesses impacted by these emergency closures. Guides and other businesses have been struggling tremendously for the past two years due to Covid. They need our support.  Go bass fishing! Smallmouth, Largemouth and Stripers are all invasive species here in steelhead territory, catch’um and eat’um!

It Takes All of Us

While we appreciate the emergency responses from ODFW and WDFW, these closures and short-term changes to how and when anglers can fish for summer steelhead are merely delaying the inevitable collapse of the species unless we address the primary limiting factors to recovery. A longer-term solution is needed to rebuild these populations and achieving that will require collaboration between all angler user groups, fishing guides, agencies, and tribal co-managers. Anglers need to speak up and tell managers that we demand management decisions that favor caution in these times.

And now, like we saw with the emergency regulation changes to Washington’s winter steelhead coastal fishery, there is a lot finger pointing and blame going around with some folks not willing to change. This is a time when every wild fish back to the spawning gravel matters and unfortunately the impacts of catch and release are magnified during low run years like we are seeing this summer. We are not saying catch and release is the main factor driving run size, but, when the fish are this depleted, every wild fish counts. In fact, the runs are so small that some tributaries may not get any spawners this year, which is why our motto is: Let’s maximize the number of healthy adults back to the spawning grounds

While these closures pain steelheaders in different ways, from missing annual fishing trips with close friends to the lost income that guides rely on for a living, if we can’t control ourselves now, we never will. Frankly, these times should make us question our approach, and hopefully, many anglers will use their free time to take a stand for the fish that has given us all so much.

How do we get there? We must remove the lower four Snake River dams, and continue to push dam operators for improved water quality and temperature. We also need to protect the cold-water refuges that migrating steelhead use on their journey through the Columbia Basin, and double down on our habitat restoration and reconnection efforts. Non-tribal commercial fleets in the Columbia need reform, and we need to demand fish managers change the status quo of recreational management and begin planning and managing for a very different climate.

The writing is no longer on the wall. It’s reality at this point and unless we address and demand changes, angling for steelhead will be a sad distant memory.

As one decision maker told me earlier this month, “These steps are important, but the Columbia River summer steelhead will need more than closures to survive.”

Stay tuned here in the coming weeks as we’ll be taking a closer look on a state-by-state basis at some of the more detailed management changes we can take right now. Additionally, we’ll be highlighting some stories from various chapter leaders about these closures and wrap things up with a Science Friday.