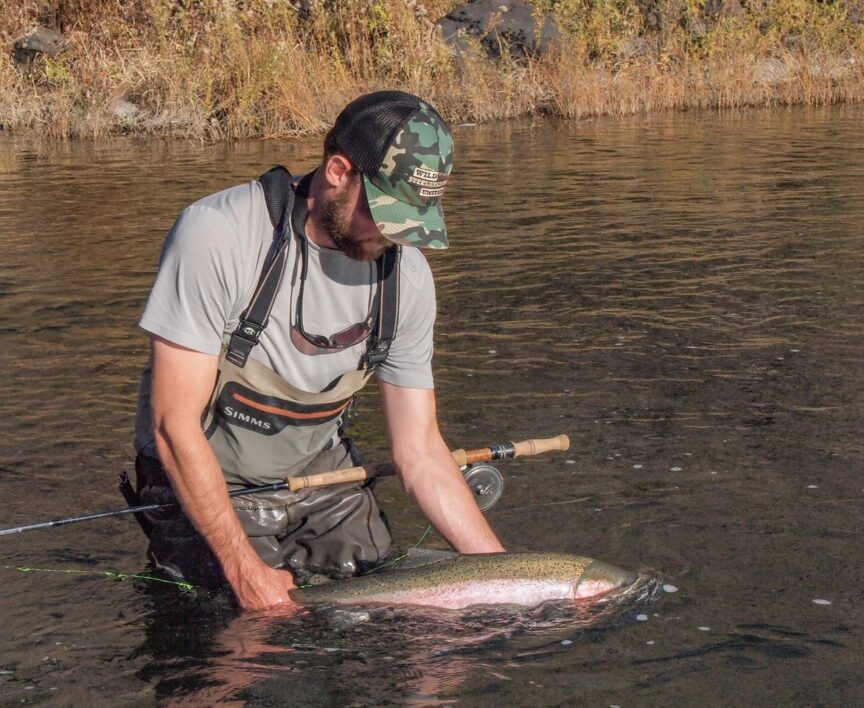 In this week’s installment of a five-part series into steelhead biology and fishery management, we dive into a discussion around life history diversity and how it relates to estimating habitat capacity.

Last week, we looked into how scientists and fishery managers commonly analyze whether harvest is appropriate for a certain population, and if so how they estimate a sustainable level of harvest. We explained what a stock-recruitment model is, how it is used to estimate escapement goals and harvest levels, and how its use can affect outcomes for wild steelhead. But does the amazing life history diversity of steelhead — by far the most of any salmonid — make it easier or more challenging for resource managers when trying to manage a population and its associated fishery?

Steelhead display a very broad range in spawn timing, spanning six months or more in Oregon’s Rogue River and other watersheds. After emergence, young steelhead fry often occupy the shallow, warm water along the bank where they can hide and grow quickly, while older (earlier emerging) fry have vacated that habitat in favor of deeper water. This maximizes the capacity of the habitat, helps increase productivity and spreads risk out over a long period of time.

Of course, there is risk to earlier spawning and emergence. The offspring of early fish could emerge into high water with little food, and survival may be poor. But the same is true with later spawning and emerging fish. An earlier onset of summer and low flows could lead to redd desiccation and/or late hatching fry emerging into too-warm water with challenging conditions for growth and survival. Survival for either group is unlikely to be zero in any given year, but productivity between the groups may vary dramatically from year to year depending on the conditions the redds and fry experience.

The Rogue River is an excellent case study for steelhead, as the watershed is home to six identified populations of anadromous O. mykiss, two summer and four winter. Each population has unique attributes that have evolved over millennia, resulting in the fish being tuned to the range of environmental conditions in a specific stream or area of the watershed. These populations will fluctuate in abundance from year to year, but will not always follow the same pattern.

This phenomenon can also be seen in Bristol Bay sockeye salmon, where within a single watershed there are annually varying hotspots of productivity depending on the life history of a given fish. Some streams will produce a lot of fish while others produce very few, and the streams that produce the most adults will change from year to year. This is a result of a group of fish hitting the evolutionary lottery, so to speak, where their life history perfectly matches the local environmental conditions of that year. This has been termed the Hedgecock effect, after the author who first described it in 1994. Life histories can be thought of as lottery tickets where each one represents another chance to win.

Would you rather be a pink salmon with one or two tickets, or a steelhead with 38 chances to win?

The suite of life histories in a population is like a financial portfolio. By spreading risk out over a variety of strategies a portfolio will be more resilient to the vagaries of the market, or an unpredictable climate. Pink salmon are the tech stocks of the salmon world — sometimes they strike it rich, other times they barely scrape by. The diverse life histories of steelhead allow them to use the widest array of habitats, like a diverse portfolio that is invested in a variety of stocks and bonds. Some are hedges against bad years, others are waiting for the right time to grow, and some just do well every year.

Unfortunately, the vast majority of, if not all, stock-recruit models in use today for steelhead do not incorporate a mechanism to include life history diversity and to account for all 38 lottery tickets. One way around this is to evaluate each fish population or watershed independently. For example, steelhead in the Lower Rogue occupy a different climate and suite of freshwater habitats than fish in the Upper Rogue, the Illinois or any of the other Oregon south coast rivers. Because of this, they likely exhibit different productivities and suites of life histories.

If we do not accurately estimate run sizes and escapements for each population it is likely that in some years harvest has been, and would continue to be, concentrated on specific populations or life histories. Without this type of management it would be impossible to set realistic and sustainable escapement goals and harvest rates, and overharvesting in some years would be a foregone conclusion.

Reductions in diversity can affect the ability of a population to support harvest in multiple ways.

First, fewer life histories mean fewer chances for winning the evolutionary lottery in any given year. This can lead to larger swings in abundance; the good years may still be great, but the bad years can be much worse.

Second, diversity is what allows steelhead to use such a wide range of habitats. Each life history may be particularly well suited to a type of habitat. This could be a small cold tributary creek, a large warm river, or even an ephemeral stream that typically goes dry by early summer. Reducing the diversity that is present in any given population can actually hurt its ability to use the full breadth of habitat types available.

Lastly, diversity allows steelhead to more quickly adapt to changes in climate than their salmonid brethren. For example, an early onset of summer will lead to elevated water temperatures in the spring and summer, and lower flows. This will likely mean that steelhead will need to spawn earlier than the current peak in April so that their juveniles can emerge during ideal conditions. Steelhead already begin spawning in December and January in Oregon South Coast streams, and these early fish will likely provide the genetic material needed for persistence, simply because it may not be possible for late spawning fish to adapt quickly enough to survive through climate change. Unfortunately, these early fish are less common than fish which spawn in March and April, and there is good evidence that early entering fish are more susceptible to being caught in sport fisheries. This can be because they may stay in intensively fished lower river areas for a longer period of time than later entering fish, or their return coincides with early entering hatchery fish.

The extent and implications of the warming climate for steelhead and other salmonids are uncertain. Will any salmonid species be able to adapt rapidly enough to persist as many of their historic habitats become increasingly less hospitable for fish that need cold, clean water? Similarly, there is uncertainty around future management strategies for steelhead and their fisheries. But one thing is for sure: it is far easier (and cheaper) to protect what already exists than to hope it can re-evolve or be recovered with substantial human intervention (i.e. hatcheries).

Next week we will conclude the series and take a deeper dive into how everything we have covered relates to the Oregon Department of Fish and Wildlife’s Draft Rogue South Coast Management Plan and wild steelhead in Southern Oregon.