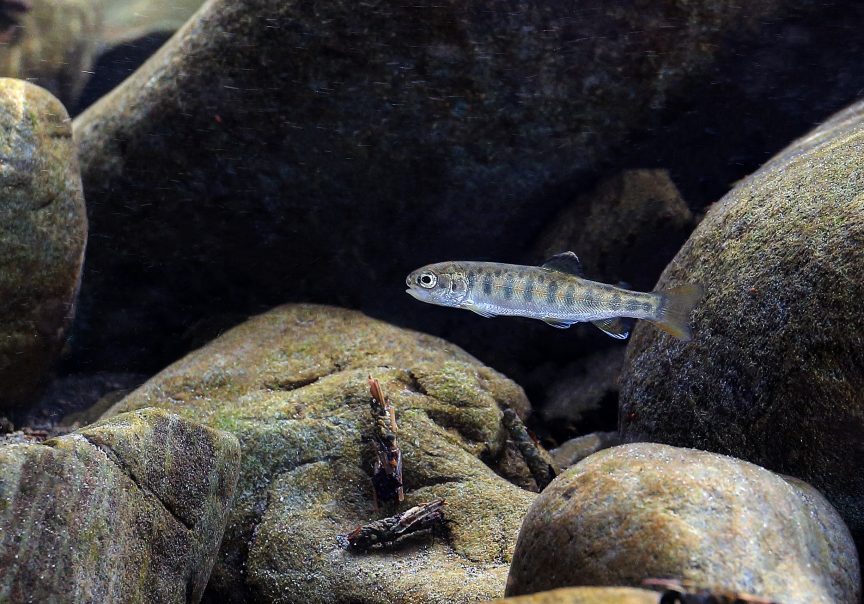 The Pacific Northwest just experienced one heck of an abnormal heat wave. Temperatures soared up to, and in some places beyond, 117F. On the west side of the Olympic Peninsula, temperatures in Forks reached 107F and exceeded 104F two consecutive days. So, even the rainforest was not immune.

The heat wave caused water temperatures to exceed 72F in the Calawah River and 70F in the Sol Duc River. Those are extremely warm temperatures for late June, and the sharp increase had an effect on emergence timing of juvenile steelhead. Over the course of four consecutive days, the density of newly emerged juvenile steelhead increased three-fold in one reach of the Calawah.

Why the increase? Most likely, warmer temperatures increased the metabolism of eggs and alevins that were in the gravel, which in turn, sped up their physiological development and growth. Without the heat wave, it is likely the young-of-the-year (YOY) steelhead would have gradually emerged from the gravel over the course of two to three weeks. This is something that steelhead will have to increasingly deal with as climate change effects continue to unfold.

To persist, steelhead will likely have to spawn earlier in the season to avoid having their fry emerge into summer low flows and peak temperatures. While it is possible that warmer temperatures could simply lead to faster emergence timing, that only works up to a point. Juvenile steelhead and other salmonids can experience a number of abnormal physiological developments, like fewer vertebrae, skeletal deformations, and reduced muscle density if they develop too quickly due to warmer water temperatures.

This type of rapid development may not only reduce the fitness of juvenile steelhead, it also can condense their emergence timing. Large numbers of juveniles emerging at similar times can lead to heightened density dependence and lower survival. This is why diversity in spawn timing is so important. It helps stagger the use of habitat by newly emerged fry over the course of several months, rather than forcing all of the fish to live and compete for food and space at the same time. In fact, a study on pink salmon in Alaska found that two runs of pink salmon only existed within a single stream because they spawned a month apart. By spawning at slightly different times, newly emerged juveniles from early- and late-spawners did not compete for the same habitat. This behavioral and life history diversity allowed the salmon population to double the capacity of the creek habitat without any changes to the creek itself.

Diversity will be more important than ever as climate change effects manifest over the Pacific Northwest in the coming decades. Steelhead are uniquely adapted to persisting in a range of temperatures, from warm to cold, but their ability to maximize their habitat also depends on their life history diversity and behavior.

This is why we at Wild Steelheaders United and Trout Unlimited are working hard to restore processes that develop and sustain cold-water habitats, and believe that diversity is the lynchpin to the persistence of steelhead and the fisheries they provide.

Until next week, enjoy the weekend and cross your fingers for come cooler weather.