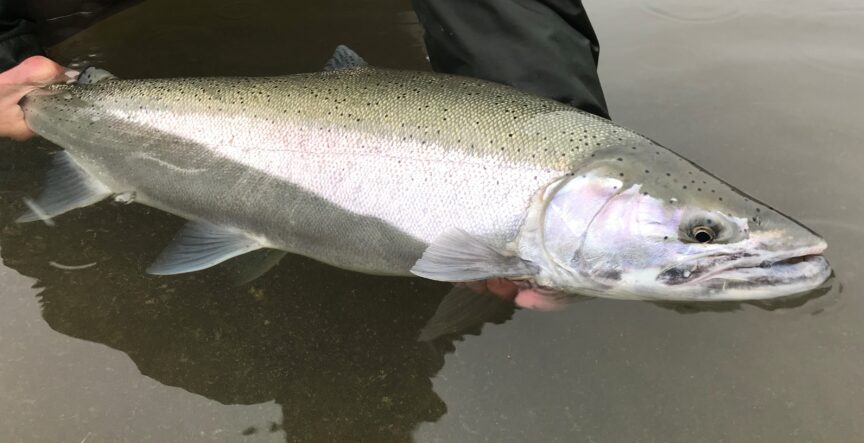 After more than two years of development, the Oregon Department of Fish and Wildlife (ODFW) recently released its Rogue-South Coast Multi-Species Conservation and Management Plan (RSP) for public comment. The plan covers the southern Oregon Coast from the California border north to the Elk River and includes actions for summer and winter steelhead, Coho, and coastal cutthroat.

This plan is badly needed, as the warming climate and other factors — including heavy angling pressure in some rivers — is contributing to declines in populations of wild salmon and steelhead. Wild Steelheaders United and Trout Unlimited (TU) have engaged strongly in the planning process thus far, in particular due to the contentious debate over management of winter steelhead in this region — one of the last places in the Lower 48 where wild steelhead can still be legally harvested by sport anglers.

In response to multiple petitions to end wild steelhead harvest in this management zone, ODFW convened a stakeholder group to examine the issues and attempt to reach a consensus solution. This plan was drafted with input from that group, although the stakeholder group failed to reach consensus on several of the most significant issues.

What’s in the plan

Wild Steelheaders United and TU have been consistent in our support of limited harvest of wild steelhead if a fishery is well managed and there is credible scientific data to support that management decision. What “well-managed” would entail in this case is a concerted effort to collect the fundamental biological information necessary to track status and trends of wild steelhead in the region — information that does not, at present, exist.

While this plan includes some efforts to collect more data on wild steelhead, it falls woefully short of what should be required before approving any harvest, in part because it proposes to continue harvest in the short term before new monitoring data is available.

The plan has other significant data collection and analysis shortcomings that would not allow managers to adequately assess the ability of wild steelhead to support harvest pressure and to utilize in-season management triggers to prevent overharvest. Without this information, ODFW would essentially be managing blindly.

SPEAK UP FOR WILD STEELHEAD OF OREGON’S SOUTH COAST.

The most basic data relied on by fish managers to determine whether harvest should be allowed, and if so to what extent, is simply, How many fish do we have? Unfortunately, this plan does not propose to collect this fundamental data for all populations which may be open for harvest. For example, ODFW identified 6 individual populations of steelhead in the Rogue River (2 summer and 4 winter) each occupying a unique part of the watershed. Each of these populations expresses a suite of life histories and local adaptation which helps the fish adapt to the variable climate and environments of their geographic range. Without population specific management it is likely that harvest would not be evenly distributed across populations with some experiencing much higher levels of harvest due to unequal access and fishing pressure within the Rogue. As written, the current plan does not propose adequate monitoring to detect whether individual populations would be disproportionately impacted by harvest of wild steelhead.

Similarly, certain life histories may also be disproportionately affected by harvest. For example, fish that enter freshwater early may spend more time in freshwater than later-entry fish. Research has shown that these fish are more likely to be caught multiple times and thus exposed to greater levels of harvest than their later entering counterparts. These early entering and/or spawning fish may also be disproportionately important because they are the fish that will allow populations to adapt to an earlier onset of summer.

Moreover, the draft plan does not include methods to estimate catch and release mortality, nor does it propose to include this important data point in the estimated harvest rate. Incorporation of catch and release mortality is necessary to accurately assess fishery impacts, especially if there is direct harvest, and is standard practice in other states such as Washington and Idaho. In good run years ODFW’s approach might be not be too harmful, but in poor run years there is a high likelihood that even the effects of catch and release fishing would increase the effective harvest rate above the proposed 10% and 15% harvest rate limits.

This is not just a theoretical concern. 2021 appears to have been one of the lowest returns to the West Coast in the past four decades. News headlines such as “Now or Never for Coastal Steelhead Season” and “Rivers Are Green But Steelhead Hard To Come By” were common in local newspapers. On the Olympic Peninsula, anglers were faced with a choice of a closed season or changes in the way they could access fish to limit encounter rates. This was simply because the predicted catch and release mortality would be high enough in a normal season that most populations would not have met their escapement goals.

This type of in-season management may ultimately help preserve fisheries for wild steelhead on the Olympic Peninsula, but unfortunately the RSP would not require collection of the data needed to make these types of decisions. Nor does it present a clear framework for what would trigger management changes in the event of low run numbers.

The most complex models being used today for predicting steelhead population size are still notoriously unreliable in forecasting abundance. The RSP proposes to use juvenile abundance as a primary metric for predicting future run sizes. While there is some correlation, this could miss long term trends because, as we all know, O. mykiss have a resident life history. And importantly, the resident life history becomes more common as the survival of the anadromous form declines.

This adaptive phenomenon means it will be very difficult to detect long term but important population trends. Further, the distribution of spawning and areas of high productivity vary from year to year and it would be nearly impossible to cover enough area to accurately capture these short term changes in abundance. Thus, this approach to predicting run size may not just be a little off — it could miss short term changes and long term trends entirely.

The RSP proposes to continue existing hatchery programs for steelhead and Coho on the south coast, with some not-so-minor changes. A new acclimation site is proposed for winter steelhead in Jump Off Joe Creek near Merlin. This type of release flies in the face of hatchery reform guidelines against off-station releases in programs which are solely meant to augment harvest opportunity. Hatchery fish are well known to replace wild steelhead rather than augment their populations, and this effect is especially pronounced when releases are widely distributed.

Other releases of this type already exist in the Rogue system. However, they are in urban streams in Grant Pass near public access points with ample public bank access for the general public. Jump Off Joe Creek is only reachable by boat and hosts populations of wild summer and winter steelhead. The plan also proposes to increase the number of hatchery Coho smolts released in the Rogue by 25%. ODFW research on the negative effects of hatchery Coho on wild populations is compelling, and the plan does not provide a similarly strong rationale to support increased releases in the Sensitive-Critical Rogue Coho population.

The stakeholder group advising ODFW on the RSP was unable to come to consensus on two other issues. The first is the proposed goal that no more than 10% of the spawning population will be comprised of hatchery fish (commonly referred to as PHOS, or percent hatchery origin spawners). This is a reasonable value to attempt to limit interactions between hatchery and wild fish, is below the estimated levels for most of the region, and is consistent with other ODFW plans and general hatchery reform guidelines. While this value is below current estimates, if wild populations were to decline PHOS rates could increase dramatically if hatchery releases stay the same. For this reason it is important to ensure that proper guidelines are in place and monitoring being conducted to evaluate the number of naturally spawning hatchery fish.

The other issue that defied consensus is the question of whether Euchre Creek and the Winchuck River should be included as Wild Fish Emphasis Areas (WFEAs) in the RSP. This designation does not influence hatchery releases for species not covered in the plan (i.e. Chinook) and there are no hatchery plans currently in the works for these two watersheds. Large hatchery programs already exist on the south coast in the two largest watersheds, the Rogue and Chetco, and are highly successful in producing fish for sport harvest. Euchre Creek and the Winchuck River are small watersheds and would likely not support the type of large programs that might justify the biological and economic cost of constructing new hatchery programs. For these reasons we support the designation of these two watersheds as WFEAs.

SPEAK UP FOR WILD STEELHEAD OF OREGON’S SOUTH COAST.

Where do we go from here?

There is much uncertainty in the future of wild steelhead and salmon and their habitats, and how they should be sustainably managed. But one thing is sure: their populations and rivers — and the rules that affect their fisheries — will not look exactly like today. Wild salmonid populations already face challenges unprecedented in modern times. This fact demands a cautious approach to management.

Fortunately for those of us who love to fish Oregon’s South Coast, steelhead are the most resilient of the Pacific Salmonids and continue to persist in increasingly warm and dry environments. Summer steelhead in the Rogue have even adapted to specialize in using streams which dry up by early summer — in the 1970s, some of these small streams produced as many as 2000 adult summer steelhead annually. The half pounder life history that is present may also be an adaptation to poor ocean conditions, where fish that miss their ocean entry window return to the river for a year to maximize their survival rather than risk more time in an ocean with little food. These types of adaptations have allowed steelhead to thrive in habitats that might seem inhospitable for coldwater-dependent species, and give us hope for their future.

If we are to realize this hope, and see wild steelhead continue to adapt and persist in numbers that can provide fisheries, we need to take a very cautious management approach now, before we reach a tipping point where we lose the genetic reservoirs that will allow these fish to adapt. The RSP, in its current version, doesn’t do that. We will continue to advocate strongly for changes to the plan that will allow all wild steelhead enthusiasts to feel comfortable about continuing to fish for them in this era of hotter and drier conditions.

Please click here to tell ODFW to select Alternative A (Catch and Release) under the Winter Steelhead Angling Framework and reduce risk to wild steelhead. Comments are due by 11:59 PM on August 1, 2021.

ODFW is also holding the following public meetings where written comments may be provided. If you are in the area we encourage you to attend.

Author Nick Chambers is a Master’s candidate in the University of Washington’s fisheries program.