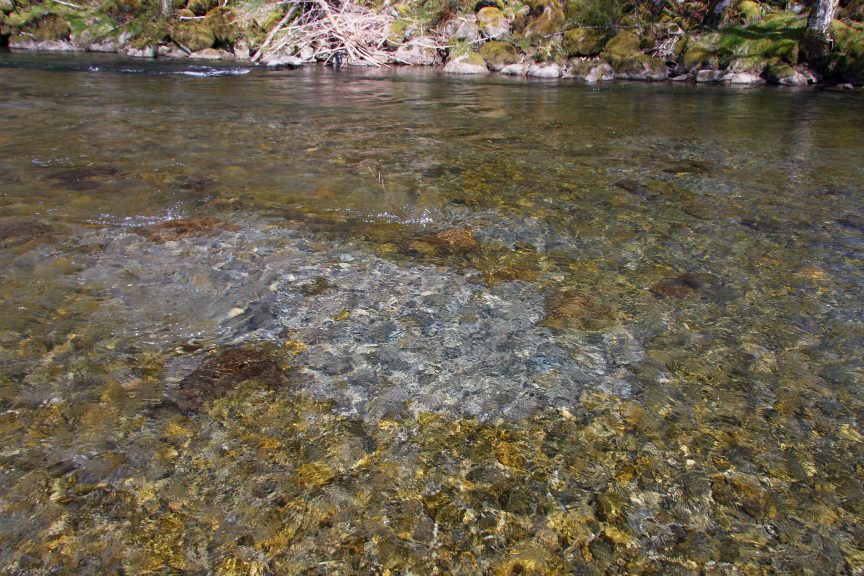 The end of May is just around the corner. This often means the end of spawning season for winter steelhead in the Lower 48, unless you live in more northerly areas like the Olympic Peninsula and Puget Sound. In these areas, it’s not uncommon to have a small portion of the population spawning into June and even occasionally into early July.

Two days ago we documented this steelhead redd during a survey in a creek in the Quillayute River basin. The fish scooted off the redd before a photo was possible, so it’s clear the redd was still under construction.

Is there anything special about a winter steelhead redd in late May? Perhaps not, in general, but if we look more closely at this one some interesting details emerge.

First, there are a couple scratches in the gravel in the upper part of the photo. Those are places where the female “tested” the gravel to see if she felt the conditions in that location were suitable for spawning. Like Goldilocks, she didn’t commit any eggs to those test baskets — she saved them for the real redd.

Second, the new redd is partially superimposed on an older redd (not visible in the photo) that was excavated by a female steelhead in the first week of February. Often, redd superimposition has negative associations because it could mean the later spawning female excavated and killed the eggs from the previous redd. But that was not the case here. The eggs that were spawned three months earlier had already hatched, and most of the fry had dispersed a few meters away, where they were safely tucked away in the gravel – hiding out during the day, waiting to come out under the cover of darkness so they can feed more securely.

Third, superimposition is actually very important behavior for steelhead and other species of salmon. It allows two different females, likely with very different genetic traits for run and spawn timing, to spawn in the same habitat. By spawning at different times juveniles can stagger the use of the habitat and reduce density-dependent effects that would have been much greater if all the fry emerged at the same time. Essentially, by spawning three months apart a single patch of gravel may produce twice as many offspring as two females attempting to spawn in that patch at the same time.

The main point here is that variation in run and spawn timing can increase the capacity of habitat through a staggered use scenario, but this type of strategy only works if there is adequate time between the two spawning events. Research suggests about 1-2 months is enough to allow eggs and fry from the first redd to develop and distribute.

This is exactly why we at Wild Steelheaders and TU maintain a strong focus on rebuilding diversity in steelhead and other salmonids. Variation in run and spawn timing helps fish maximize the potential of existing habitat and also increases their genetic diversity, which is key if we want the species to persist through climate change (for example, steelhead may have to gradually, or quickly, change their run and spawn timing to keep pace with changes in streamflow and water temperature).

Make sure to leave any questions or thoughts in the comments and catch up on past Science and Field Day Friday blog posts here.