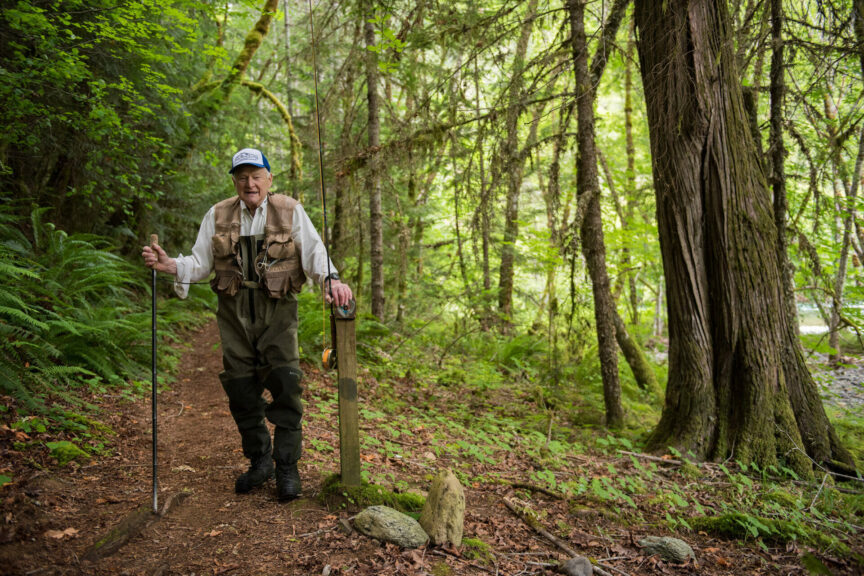 The world of fly-fishing and conservation has lost a giant.

A decorated World War II veteran who fought on the beach at Normandy on D-Day, Moore settled in the small logging town of Roseburg, Ore., with his wife, Jeanne, after the war.

While running a small café in town, Moore still found time for frequent evening fishing excursions to the North Umpqua, where he became enthralled with the silvery wild steelhead that finned in the river’s azure runs.

So began a lifelong love of the river, one spent not just chasing steelhead but fighting to protect the water they called home.

As he learned the river, Moore soon parlayed his love of steelhead into a part-time job guiding for Clarence Gordon, who ran a fishing camp and had a small store in Steamboat. The Moores bought the business in 1957 and established the Steamboat Inn, where they hosted thousands of guests over the years.

In the early 1970s, two of those guests were advertising and film executives Dick Snider and Hal Riney, who stopped at the Inn for a short visit on their way to a planned fishing trip in British Columbia. They never made it to Canada. Instead, they spent their vacation with Moore, who guided them around the area and showed them how poor logging practices were damaging the river.

“Frank was not opposed to logging at all,” remembered Dean Finnerty, TU’s Wild Steelhead Initiative manager and a longtime friend. “He just wanted it done in a reasonable manner.”

After Snider and Riney produced “Pass Creek,” a short movie about threats to the river from logging, Moore would fly in his single-engine Cessna to angling club meetings throughout the region to show the movie and discuss the threats. That helped lead to passage of the Forest Practices Act, critical legislation for protecting watersheds.

Moore was also a key player in the establishment of the famous fly-only fishing stretch of the North Umpqua, something he felt was needed to protect fish from heavy pressure after a highway was built along the river.

Jeanne Moore, who survived him, was an active conservationist and an expert botanist. Her discoveries of rare plants in the watershed helped lead to the designation of 1,800 acres as a Natural Research Area.

Though they sold the Steamboat Inn in 1975, the Moores remained a fixture in their community. Tragically, their home on a hill above the river was among many destroyed in a 2020 wildfire that burned more than 130,000 acres.

The couple’s legacy as stewards and advocates for their beloved river was cemented in 2019 with the establishment of the Frank and Jeanne Moore Wild Steelhead Management Area, which enhanced protections for nearly 100,000 acres of the watershed.

“Frank Moore was a giant of conservation,” said TU President and CEO Chris Wood. “Few have given as much to protect the North Umpqua, and their beloved Steamboat Creek, than Frank and Jeanne Moore. Their legacy will live on in the many lives they made better, and the lands and waters they made better.”

In the coming weeks, we’ll have more about the legacy of Frank Moore, including a personal essay from his close friend and Wild Steelheaders United manager, Dean Finnerty.

Mark Taylor is the eastern communications director for Trout Unlimited. Based in Roanoke, Va., he manages communications for a region that stretches from the upper Midwest to the Atlantic. Taylor started fishing and hunting as a child growing up in rural Southern Oregon.