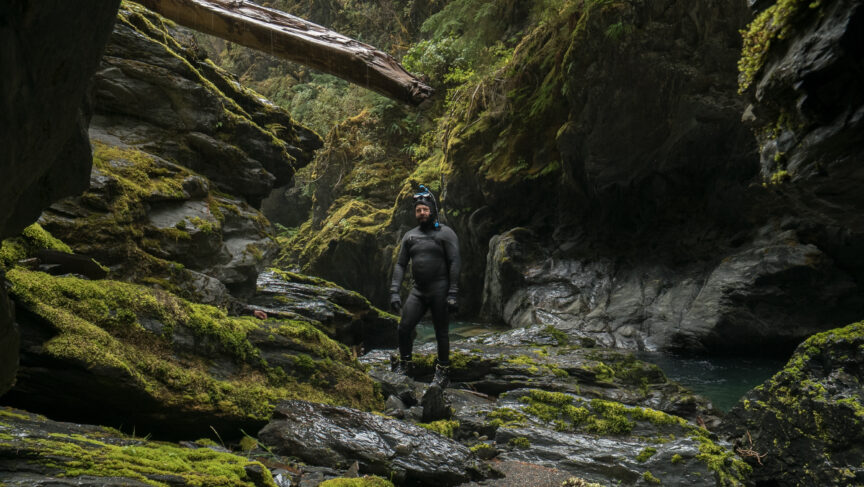 Editor’s Note: Sometimes a person, not through any design of their own, becomes synonymous with a cause, a brand, a place. For example, John Muir is Yosemite. In the same way, John McMillan is wild steelhead.

McMillan, one of the foremost steelhead biologists in North America, and one of the most accomplished steelhead anglers anywhere, has been senior scientist for TU’s Wild Steelhead Initiative for the past seven years. TU’s VP for Western Conservation, Rob Masonis, recruited McMillan to help launch this ambitious and hopeful program, which aims to protect and restore wild steelhead runs and habitat across their native range in the Lower 48 and to sustain and improve steelhead angling opportunities.

In this position, McMillan broke new ground in the field of steelhead biology, including publication of multiple peer-reviewed studies, and provided the scientific underpinnings for numerous conservation victories such as more protective angling regulations for Olympic Peninsula wild steelhead, establishing a portfolio of wild-only and hatchery steelhead rivers in Puget Sound, and documentation of the return of wild summer steelhead to the Elwha River after two dams were removed.

Recently, McMillan accepted a new position with The Conservation Angler, which will allow him to do research on wild steelhead on Russia’s remote and largely intact Kamchatka Peninsula. Here, Masonis provides his thoughts on what John McMillan has meant to Trout Unlimited, and to wild steelhead in the Pacific Northwest.

When I began building the Wild Steelhead Initiative in 2014, one of the first things I did was hop in my truck and drive to Joyce, Washington. Far up a dirt road, tucked into the woods in the Elwha River Basin, was John’s home.

John and I had crossed paths a few times over the years but had not gotten to know each other (the first time we met was at REI in Seattle, when John and his legendary conservationist father, Bill, had a signing event for May the Rivers Never Sleep, a wonderful book they wrote together that I highly recommend). But I knew John’s well-earned reputation as a preeminent fish biologist and as an exceptional steelhead angler.

That afternoon we spent several hours discussing the need for a focused effort to ensure that the wild steelhead of the Pacific Northwest would be around in the decades to come, and when I asked John to join TU as the lead scientist in that effort he enthusiastically agreed.

For the past seven years John has been instrumental in the Initiative’s success.

John’s unparalleled science expertise coupled with his exceptional storytelling talent — he famously fuses steelhead science with popular culture in his appearances at conferences and advocacy gatherings, where, for example, he describes male steelhead as “Arnold Schwarzeneggers” or “Danny DeVitos” to explain how male steelhead of different sizes use specialized mating strategies – has helped persuade fishery managers and anglers alike to think afresh about how we should manage wild steelhead and the rivers they inhabit.

As the many invitations he receives to speak at events from British Columbia to California attest, John is in high demand and widely respected. His exquisite underwater photographs, which have graced numerous publications, are equally prized and solicited.

John has notched many accomplishments during his TU tenure, including playing a pivotal role in ending wild steelhead harvest on the Olympic Peninsula, laying the scientific foundation for a portfolio approach to steelhead fisheries, and documenting and spreading the miraculous news of the re-emergence of summer-run steelhead in the Elwha after removal of two large dams.

The North American Journal of Fisheries recently published as its featured article John’s paper showing that wild steelhead populations on the Olympic Peninsula rivers were once much more abundant than previously thought, which is critically important to establishing biologically sound escapement goals and responsibly regulating fishing.

This paper showcases what John does so well: challenge status quo fishery management that is unsupported by sound science.

John thinks big when too many people think small. Unlike many scientists whose research interests take them deep into the proverbial weeds, John keeps his sights trained on the big, important science issues that need to be tackled if we are to make the large jump forward in wild steelhead management that is urgently needed.

John does science for the fish he cares deeply about — and for the anglers who understand that the opportunity to fish for wild steelhead is, to borrow a quote from Kevin Fedarko’s gem of a book, The Emerald Mile, a “bestowal of grace for which one has done nothing whatsoever to deserve.”

Speaking of grace, I feel privileged to have fished with John and, my mouth agape, watch him effortlessly launch casts with laser-like precision to cover a lie clear across a river. His wading is equally as impressive, not because it is graceful but rather because of the way John charges into boulder-strewn, swift currents to within an inch or two of his wader tops, challenging the river to take him down.

Somehow, he always remains standing. Suffice to say that I have learned many lessons about fishing by observing this master angler doing what he loves.

Like many people who know too much to suffer fallacies and fools, John will be the first to admit that his temper can be short, that his delivery of information that needs to be shared can be aggressive, and that he can be quick to pass judgment. But these tendencies spring from “good places” — his abiding love of wild steelhead and the rivers they inhabit, and his unyielding determination to right the wrongs that threaten their future.

Please join me in wishing John well in the next chapter of his storied career and in thanking John for his many contributions during his wonderful run at TU. John, you have inspired us and done us proud. You will be greatly missed at Trout Unlimited, but we are heartened to know that you will carry on the good fight to which you have devoted so much.