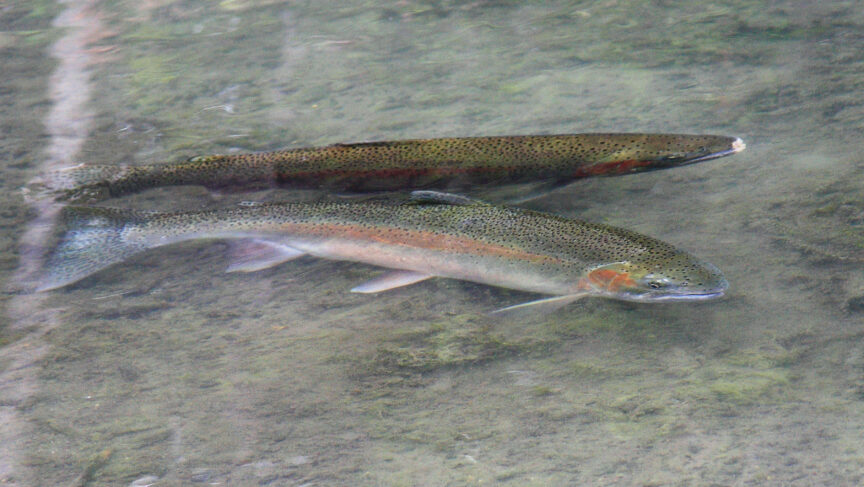 Looking into the past

It’s difficult to fix something if you don’t know what is broken and what parts are missing. I think that is one reason famed conservationist Aldo Leopold said, “To keep every cog and wheel is the first precaution of intelligent tinkering.”

Unfortunately, we haven’t followed that precautionary principle with respect to managing our native steelhead and salmon stocks.

As a result, much of the original evolutionary fabric of wild steelhead populations in the Pacific Northwest has been lost to history.

This is a conundrum we face now in both the science world and the conservation space. We know that populations of virtually every species of native anadromous fish in this region have declined dramatically over the past half-century.

But how much, exactly? What did populations of steelhead look like fifty years ago, or even 75 or 100 years ago, when our scientific monitoring and resource management record-keeping were less effective than today? And what was the run timing in those days?

To try to answer these questions for some of the most intensively studied (and fished) wild steelhead runs in North America, Matt Sloat of the Wild Salmon Center, Martin Liermann and George Pess of NOAA’s Northwest Fisheries Science Center, and I analyzed historical data for several major populations of wild winter steelhead on Washington’s Olympic Peninsula (OP).

The results of our analysis were just published in the North American Journal of Fisheries Management.

The first two posts (here and here) on this topic from guest author Geoff Mueller have provided an overview of our major findings, so today I dig into some of the details about the changes in abundance and run timing, and discuss some of the potential implications for OP steelhead.

How many fish were there?

Our results indicate winter steelhead were more abundant historically than they are now, which is not unexpected. Among streams, the average historical annual run size (based on approaches using catch, catch per unit effort (CPUE),0 and watershed size) was 21,843 steelhead in the Quillayute, 13,505 fish in the Hoh, 15,191 fish in the Queets, and 16,897 fish in the Quinault. Compared to the average annual run size from 1980-2017, that represents a decline of 38% in the Quillayute, 69% in the Hoh, 50% in the Queets, and 63% in the Quinault.

However, run sizes have declined even more sharply in the past decade. If we compare our mean historical estimates to the most recent five-year period (2013-2017) which we analyzed, then returns of wild steelhead have declined by 67% in the Quillayute, 80% in the Hoh, 73% in the Queets, and 71% in the Quinault rivers.

Canneries operated at the river mouths for a few decades in the early 1900s and there was commercial and subsistence fishing in addition to logging and other habitat alterations, such as removal of logjams.

Considering the 1923 cannery estimate for the Queets was almost twice as high as its average run size from 1948-1960, it’s possible the extent of decline is even greater than we found.

How has run timing changed?

Overall, we estimated that migrating timing of wild winter steelhead now peaks one to two months later than it did historically. As a result, the breadth of migration timing has contracted by up to 26 days (a 37% reduction).

Among rivers, run timing has contracted for wild winter steelhead the most in the Hoh and the least in the Quillayute.

We also found that, historically, steelhead were common in November and frequently abundant in December. It might be surprising to many anglers that, for example, 43% of wild steelhead entered prior to January 1st in the Hoh River and the date at which 50% of the population passed through the fishery now occurs 61 days later than it did.

Essentially, that is like losing 61 days of fishing opportunity.

Many are likely unaware the Hoh River and other populations once had so many early-entering wild steelhead. This is referred to as Shifting Baseline Syndrome. Each generation of biologists – and anglers – come to accept the status quo, or close to it, as the historical norm.

And that is why older fishery data can be valuable: it offers a chance to better understand what has been lost, or broken. A bit of reverse “intelligent tinkering,” if you will.

Did hatchery and wild fish overlap in run timing?

Washington State was at the forefront of developing an early-returning hatchery steelhead program (often referred to as the Chambers Creek stock of fish). These fish were selectively bred to return from late November through early January. The assumption was that those early-timed hatchery fish would not compete or spawn with wild fish, because wild steelhead were believed to enter later in the season.

However, using historical catch and CPUE data, we estimate that the run timing of hatchery steelhead in the four OP rivers in our study overlaps directly with the earlier returning wild winter steelhead that were prominent during the historical period, but which are now greatly reduced in the contemporary period.

Changes to run timing, including later timing and compression of the overall breadth of timing, has potential to influence steelhead populations in different ways, some of which we touched on in prior posts.

First, depletion of early-timed wild winter steelhead represents a reduction in diversity. Run timing is highly heritable in salmonids, so it is also likely the genotypes underpinning the migration timing of early-returning steelhead are also depleted, though not entirely lost. In this context, recovering or rebuilding run timing is thus also about rebuilding genetic capacity for such behavior.

Second, depletion of those early steelhead could also alter productivity and resilience. For example, earlier-spawning steelhead tend to rely more heavily on smaller streams, and they may be able to access some of those smaller streams only when flows are highest in early winter. Without early entering fish those habitats could be utilized less, or not at all, by spawning steelhead.

Further, offspring from earlier-entering and spawning steelhead will emerge earlier and have a 1-3-month growth advantage compared to later spawning steelhead, which could improve survival and diversify age at smolting. Earlier and later entering steelhead may spawn in the same habitats, but at different times, thereby allowing their offspring to stagger the use of habitat.

Lastly, steelhead today will have to adapt to keep pace with a rapidly changing climate. For example, the onset of summer low flows are predicted to occur earlier in western Washington in the future.

One reason steelhead generally enter and spawn earlier in more southerly rivers is so they can time their spawning to ensure their juveniles emerge prior to the heart of summer. This suggests early entering steelhead may be disproportionately important to the future of wild stocks and our steelhead fisheries on the OP.

We cannot be certain about how changes in run timing have affected the resilience and productivity of wild steelhead on the OP. But we can now say with confidence that historically there were quite a few early-timed wild winter steelhead. This is important because it can help correct the Shifting Baseline for OP steelhead, and help make our “tinkering” today more intelligent.

Aldo Leopold also said, “The good life of any river may depend on the perception of its music; and the preservation of some music to perceive.” Wild steelhead are one of the finest types of river music – and we must do better in preserving their notes and melodies.

Read the full report, ‘Historical Records Reveal Changes to the Migration Timing and Abundance of Winter Steelhead in Olympic Peninsula Rivers, Washington State, USA,’ here and leave any questions or comments below.