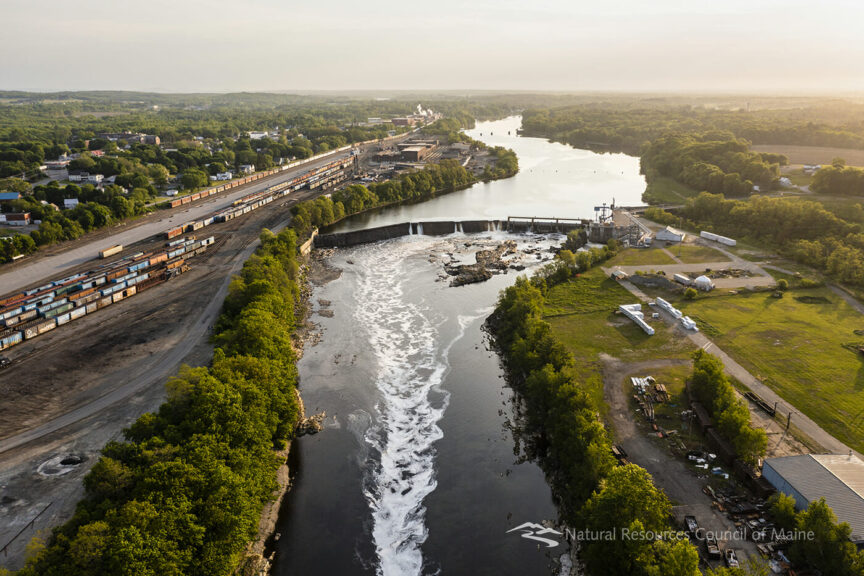 Part 2 of a series. This week, we’re telling stories about what happens when dams come out and life flows back in. It’s a vision of what could be on the lower Snake: a free-flowing river and wild fisheries staging a remarkable comeback.

In New England, where dams have devastated runs of Atlantic salmon and other native sea-run fish, Trout Unlimited has been working to restore rivers and salmon runs for more than 30 years.

Much of this work has focused on removing old dams and otherwise improving fish passage in major salmon rivers such as the Penobscot and Kennebec in Maine. What have we seen in these waters, as a result of our efforts?

Increasing numbers of stripers and shad pushing past former blockages from the coast. River herring pouring into the rivers by the millions. And salmon following ancient instincts and returning upriver in an attempt to spawn in the headwaters as their ancestors did before the dam-building age.

Between 1999 and 2016, TU worked with many resource agency and conservation partners to remove the Edwards Dam at the head of tide on the Kennebec River. In 2008, we won a campaign to remove the Fort Halifax Dam at the mouth of the Sebasticook River, a major Kennebec tributary.

On the Penobscot, we worked with the Penobscot River Restoration Trust to remove the two lowest dams on the river, Veazie and Great Works, between 2012 and 2014, and to construct a bypass channel around the Howland Dam at the mouth of the Piscataquis River in 2016.

Taking out dams which produce hydropower – even if that power generation is minimal – requires creative thinking, diplomacy, and funding. TU and our river restoration partners work closely with local communities and other stakeholders to make dam removal and other major restoration initiatives a good deal from multiple angles.

On the Penobscot, for example, TU helped build deals to replace every bit of power production lost in removing the dams by bolstering hydropower generation elsewhere in the basin without harming fish.

Since the dams came out, the ecological recovery in the lower Kennebec and Penobscot rivers has been dramatic. On the Kennebec, members of TU’s Kennebec Valley Chapter were catching shad and striped bass the year after Edwards was breached.

The Penobscot saw a similarly rapid response, with shad returns increasing from zero to 11,000 within five years of the dams coming out, along with nearly two million river herring per year.

Dams are the single most significant factor in the decline of Atlantic salmon in Maine, and this species remains endangered in this region in part because so many dams are still in place. Recovering native salmon runs here will only happen if we remove other dams on the Penobscot and Kennebec rivers.

So far, recovery of native fish populations on the Kennebec has been limited to its lower reaches. Other dams on this river remain problematic for sea-run fish.

Just 17 miles upstream of where Edwards Dam was removed, the Lockwood Dam and three others sit between the recovered section of the Kennebec and the Sandy River, which contains perhaps the best Atlantic salmon remaining habitat for Atlantic salmon left in the United States.

TU is working with our partners in the Kennebec Coalition to press state and federal agencies and the dam owner to remove the four lower Kennebec dams.

Our advocacy received a major boost in late November when the Federal Energy Regulatory Commission decided to complete a full Environmental Impact Statement as part of the process of relicensing the Shawmut Dam.

This action came after six years of requests from TU, the Kennebec Coalition, and our state and federal agency restoration partners.

The EIS will evaluate the dam’s impacts on endangered salmon and other sea-run fish, as well as the impacts of the other three lower Kennebec dams, providing for the first time a comprehensive assessment of how these dams collectively impact fish and river ecology.

We know what will work to bring back Maine’s native salmon and other anadromous fishes. As long- time Kennebec Valley TU member Willie Grenier put it, “Every place in Maine we’ve removed a dam—on the Kennebec, the Sebasticook, the Penobscot, and the Presumpscot—sea-run fish have immediately moved upstream and re-established themselves.”

Next up: Part 3 on impending dam removal on the Klamath River in Oregon and California