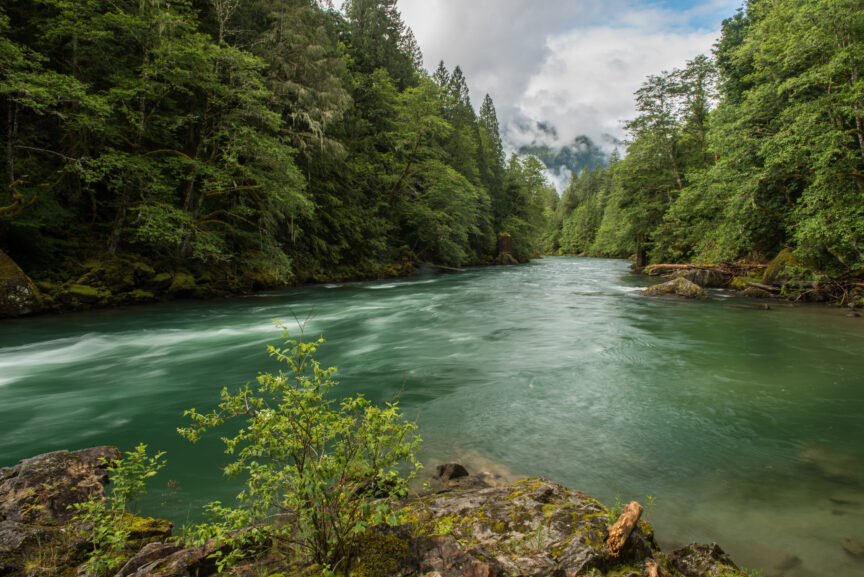 On January 17th, the Oregon legislature commenced a “long session” that will continue into June. Wild Steelheaders United is tracking quite a few bills – and concepts that haven’t yet been filed as bills – that would affect wild steelhead.

Split season leases are a unique tool under Oregon water law for protecting water instream during late summer and fall when streamflows are low and warm, and summer steelhead are migrating upstream.

Split season leases authorize “split” use of a water right within a single season, meaning the water right holder may use the water for a portion of the water year, with another party leasing that water for instream use during the same year. For example, under a typical split season lease, an irrigator might divert water from a stream from May 1 – July 14, then a non-profit would lease the water right for instream use from July 15-September 30. This tool is very important to non-profits, tribes, and landowners that want the flexibility to put water instream during the late summer and early fall when fish need it.

The statute that authorizes split season leases (ORS 537.348) is scheduled to sunset on January 2, 2024 – the third sunset date the program has faced. Wild Steelheaders will advocate for the legislature to (1) permanently authorize the program, and (2) remove the so-called “10-year-cap” in ORS 537.348(2), which limits the total period that a single water right may participate in the split season lease program.  These two relatively minor changes in the statute would ensure availability of an instream leasing tool that benefits wild summer steelhead in places like the Grand Ronde watershed, while also allowing landowners the flexibility to lease water for the part of each season when fish are vulnerable to low-flow conditions.

Injunctions are a court-ordered legal remedy that require someone to immediately take (or cease) an action. However, the Oregon Water Resources Department (OWRD), the state’s primary regulator of the use of water, does not have strong authority to obtain injunctions in cases of illegal water use.

In recent years, this has become a significant problem in parts of the state with extensive illegal cannabis operations. Particularly in southwestern Oregon, illegal cannabis growers without water rights have constructed reservoirs and diverted water from streams, thereby decreasing streamflows, degrading water quality and injuring senior water users that cannot obtain their full water right as a result of the illegal use. Much of this illegal water use is on important wild steelhead spawning and rearing tributaries to the Rogue, Umpqua, and Illinois Rivers. Fish can die before the state can act without an injunction to permanently stop the illegal activity.

OWRD should have the authority to request a court order that immediately terminates such illegal activities (even if only temporarily while the agency commences more time-consuming legal proceedings). Wild Steelheaders supports Representative Pam Marsh’s proposal to provide stronger injunctive authority to OWRD so the agency can act quickly in such emergency situations.

Legislators have already filed several fish-centric bills this session, and there will likely be others in the coming weeks. Of particular note are bills that might increase angler suppression of smallmouth bass and other non-native game fish.

Last year, the ODFW Commission approved new regulations that remove all size and bag limits for bass in Oregon streams in 2023 (with Wild Steelheaders’ support; see the zone regulations for bass in your 2023 angling regulations). The Commission also allowed spearfishing for smallmouth bass in the Coquille River last fall under a temporary rule because that illegally-stocked population of bass is likely causing the collapse of fall chinook in the Coquille. But bass predation on wild steelhead remains a problem.

Smallmouth bass are a game fish in Oregon, which means anglers cannot “waste” retained bass. As a result, anglers may legally kill unlimited bass in the Coquille in 2023, but each of those fish must be cleaned and consumed, thereby limiting the extent to which anglers will kill significant numbers of bass.  Oregon statutes also do not allow fishing contests or tournaments to kill bass or walleye. Proposals under consideration would address these policy roadblocks, and Wild Steelheaders United is hopeful that we can use these to increase angler pressure on non-native species that are likely contributing to the decline of wild steelhead and salmon populations.

State programs that support wild steelhead conservation can be dramatically affected by line items in the legislature’s budget. This session, the legislature will determine what programs are funded for the 2023-2025 biennium (i.e., July 1, 2023 through June 30, 2025).

Among other budgetary priorities, Wild Steelheaders supports funding for ODFW that would build out the agency’s fish passage and water programs, increase removal of non-native fish species in strategic places to benefit native fish, and boost staffing for the agency’s Klamath salmon restoration team (charged with implementing the reintroduction plan for salmon and steelhead to the upper Klamath River basin – which relies on natural recolonization by wild steelhead – now that dam deconstruction is formally approved and slated to start this year).

We also support the staff positions and funding necessary for ODFW and Oregon Department of Forestry (ODF) to implement key components of the Private Forest Accord. Oregon Watershed Enhancement Board (OWEB) and Oregon Department of Agriculture (ODA) also have key budget requests that would benefit wild steelhead, regarding state funding for instream flow restoration and agricultural water quality improvement, respectively.

The Wildlife Habitat Conservation and Management Program (WHCMP) at Oregon Department of Fish & Wildlife (ODFW) is one of Oregon’s primary programs to incentivize habitat restoration and conservation on private lands.

Counties may opt to participate in the program, under which WHCMP offers a property tax incentive to landowners within the county that enroll acreage in the program and develop a management plan for those conserved areas. For example, landowners with acreage adjacent to a stream might convert some of that acreage from agricultural production to habitat restoration, without losing the relatively low tax assessments provided to agricultural lands.

Wild Steelheaders expects much of the legislature’s attention on natural resources issues in 2023 to center on water policy. At this point, it’s difficult to tell which bills will gain traction. In our advocacy, Wild Steelheaders will primarily consider how legislation would affect fish passage and instream flows – we will guard against legislation that would hinder improvements in fish passage (e.g., proposals to exempt dams and other obstructions from fish passage laws) or increase consumptive use of surface water or ground water, and we will help to advance legislation that would protect or improve fish passage, instream flows, and water quality.

The Oregon legislature’s website, OLIS, is the best way to keep tabs on the status of bills and amendments to draft language. OLIS is also the means of attending committee meetings remotely and submitting written testimony on bills under consideration. Stay tuned for Action Alerts from Wild Steelheaders, and links to ways you can help pass or stop legislation that would affect wild steelhead. For more information, contact TU’s Oregon Policy Advisor, James Fraser (james.fraser@tu.org).