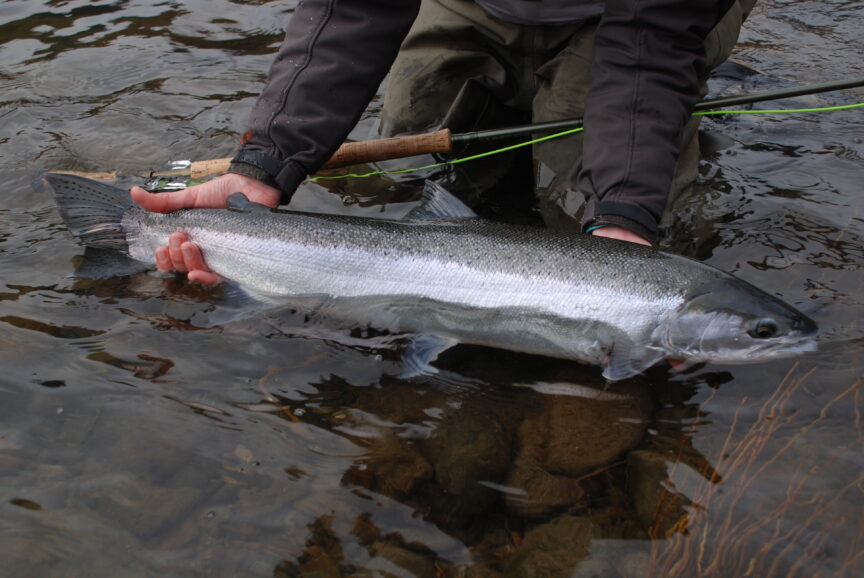 I’ve had a place on the banks of one of the best salmon and steelhead streams in the West – the Umpqua – for many years. It never gets old, sitting at my dining room table, watching the river glide by and wondering if there are any silvery sea-run fish moving past my place.

But in recent years there have been far fewer fish — especially steelhead — migrating past my dock. My own encounter and catch rates, with both gear and flies, have confirmed this.

The decline in steelhead and many salmon runs is widespread across their range in the Pacific Northwest. Dams, the warming climate, lower late season flows, poor conditions in the marine environment, and yes, angling pressure — all are factors in the downward trend.

Fortunately, here on the Umpqua, anglers rallied more than a dozen years ago to ensure that fishing pressure on winter steelhead would not kill the Christmas gift that keeps on giving. The result was new angling regulations that better protect winter steelhead. These regulations are widely supported by local guides, businesses, and communities.

The change that anglers supported here was simple: prohibit harvest of wild steelhead on the mainstem Umpqua and its legendary North Fork. If folks want to harvest a steelhead, they can fish the South Umpqua, where a popular Steelhead Trout Enhancement Program (in which volunteers rear ODFW-produced salmon and steelhead juveniles at smaller hatcheries to augment salmonid numbers for sport fishing opportunity) provides that option.

Fish and game are the ultimate renewable resource — if we manage them conservatively. And durable wild populations are the most economical and ecological way to sustain sporting opportunity. While there’s not much we can do in the short term about the impacts of climate change on wild steelhead, we *can* do something about sportfishing pressure.

This past summer, the Oregon Department of Fish and Wildlife closed the North Umpqua to summer steelhead fishing — the first time in history that’s ever happened. AND… I never heard a single complaint from anyone. Anglers understood that in these very difficult times for steelhead, what worked in the past for managing coldwater fisheries is now unsustainable in many waters.

But as proactive and sensible as ODFW has been in managing steelhead and salmon fisheries on the Umpqua, the agency has outright failed on other important salmon and steelhead rivers. On December 17th the Oregon Fish and Wildlife Commission accepted the recommendation of ODFW staff and approved a fisheries management plan for the Rogue-South Coast region that continues to allow harvest of wild steelhead — one of the very few places in North America where this is still allowed.

There’s just no excuse for this management fail. Wild steelhead stocks are in steady decline everywhere. Anglers can still kill hatchery steelhead. Fishing gear and techniques are more effective than ever before. The vast majority of people who commented or testified to the Commission on this issue supported catch-and-release only for wild fish. And most important, ODFW doesn’t have the monitoring or angler impact data to support continued harvest.

But ODFW and the Commission caved to a tiny but vocal minority of anglers for whom being able to harvest hatchery fish only isn’t good enough. They still want to bonk wild steelhead. In fact, these folks told the Commission, in effect, they would rather see the season closed altogether than release a wild fish.

ODFW staff insisted that a 1/3 bag limit for wild steelhead won’t put native populations of steelhead in this region in jeopardy, despite the fact that juvenile steelhead counts on the Rogue over the past six years have been the worst six years on record. In the late 1990s, the federal agencies responsible for conserving anadromous fish warned ODFW that declining numbers of wild steelhead could lead to their being listed under the Endangered Species Act and urged ODFW to begin collecting more data to better manage these stocks. Mostly due to budget constraints, that data has never really been gathered by ODFW in the Rogue-South Coast region. Continued harvest of wild steelhead increases the odds of an ESA-listing for these stocks — hardly sustainable fishery management.

The prudent and logical path forward for the Rogue-South Coast steelhead fisheries was to suspend harvest of wild fish for a few years until ODFW has better data on juvenile returns, adult escapement, angler encounter rates, and other critical variables. But it was more important to ODFW, apparently, not to alienate a small minority of anglers stuck in their ways than it was to make sure fishing won’t push wild steelhead populations over the edge into an ESA-listing.

From the household budget to wildlife populations, you eventually go bankrupt if you spend more than your income brings in. When times are tight, you have to make hard and unpopular choices. ODFW has properly done this for the Umpqua — just this week, the agency reduced harvest of wild spring chinook in the Umpqua due to low forecasted run size — yet buckled when the chips were down for the Rogue-South Coast region. Given the agency’s lack of data to support continued harvest of wild steelhead, the recent decision on new regulations for this region is misguided at best and at worst malpractice.

For now, I have my fingers and toes crossed, hoping that wild steelhead numbers will begin to rebound and that we can all get back to fishing for wild steelhead like we used to “in the old days.” But mere hoping that conditions improve is a poor basis for managing any natural resource. We can and must do better for the iconic sportfish of the Pacific Northwest. Wild Steelheaders will not rest until management policy for the Rogue, Coquille, Chetco and other important wild steelhead waters is better aligned with population trends, habitat conditions, and angling impacts. Stay tuned for ways you can help.