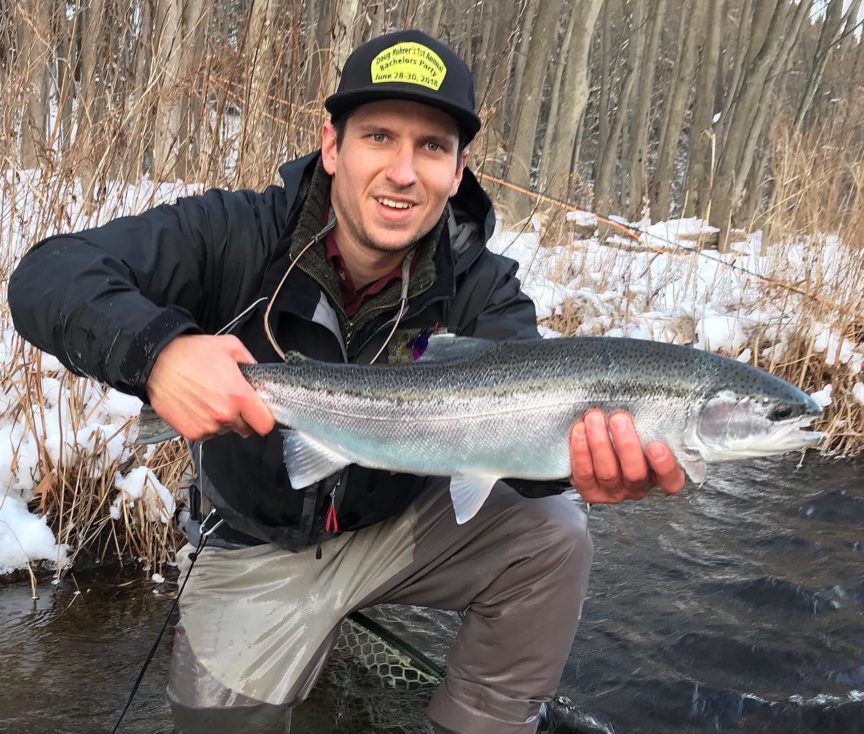 This Science Friday we have the final part of a three-part series on steelhead in the Great Lakes.

This is the second-half of last month’s article, authored by Brian Morrison, Fred Dobbs, and Chris Atkinson. The article was originally published in The Osprey in September 2010 (link to the original article in The Osprey is here: http://ospreysteelhead.org/archives/TheOspreyIssue67.pdf). The Osprey has a history of providing scientific information and conservation perspectives on salmon, steelhead, trout, char and their habitats across the Pacific Northwest and throughout North America. We at TU support The Osprey and you are interested in donating to help maintain the publication, which relies on donations from anglers, please go to this link: http://www.theconservationangler.org/osprey.html.

The Nottawasaga River did not support a popular sport fishery for steelhead until the 1940s. It is believed that early maturing adults dominated the spawning populations from the 1940s until the early 1960s. Fishway construction starting in the1960s allowed access to previously inaccessible habitat. During the late 1960s, a large steelhead sport fishery was established. During this time, the Ontario Ministry of Natural Resources (OMNR) opened up seasons to increase opportunities for anglers to fish and harvest steelhead year-round. In 1987, the OMNR created a year round open season from the mouth of the Boyne River to Georgian Bay (70kms of angling access) on the Nottawasaga River, allowing a daily possession of five steelhead. Angling effort increased proportionally as longer seasons and increased harvest opportunities were created. It was believed that a large proportion of the Boyne River and upper Nottawasaga population over wintered in deep pools on the mainstem Nottawasaga below the mouth of the Boyne River, and became vulnerable to harvest after this new regulation. By the early 1990s, a decline was observed in upper Nottawasaga and Boyne River populations and decline in repeat spawning rate (Figures 2, 3 and 4). In 2008, a catch and release only zone for steelhead was established, through the work of the Nottawasaga Steelheaders organization, from the mouth of the Boyne River to the Pine River to protect overwintering Boyne River and upper Nottawasaga populations. Unfortunately, a lack of monitoring has not been able to provide data on whether the new regulation is achieving the desired recovery in population size, and proportion of repeat spawners.

The typical age of smolting in major spawning tributaries (e.g. Boyne River) is age-2. This differs from the upper Nottawasaga drainage, which has a high proportion of stream age-3 smolts. Most smolts leave the river during late April and May, but some begin the smolting process earlier, and move downstream in September and October. Nottawasaga steelhead typically spend one to three years in Georgian Bay prior to their first spawning migration, with three years being dominant. Males are known to mature earlier than females, often maturing after only one year in the lake. The Nottawasaga drainage is known to contain a unique life history of rainbow trout known as the ‘half-pounder’, which has been described in northern California, southern Oregon, and Kamchatka tributaries. Half-pounders typically spend only 2-4 months in the estuary or nearshore lake environment, enter the river on a foraging foray and often overwinter within the river environment before returning to the lake the following spring. The precocious males are usually larger than fish with the half-pounder life history, where approximately 42cm (16.5 in) is the threshold between the two. Based on evidence from other Great Lakes wild steelhead populations, approximately 33% of the population exhibits a half-pounder life history trait. These fish will then rear in the lake for 1-2 years before returning to spawn. This behavioral strategy makes these individuals susceptible to angling mortality within the river and near-shore lake environment before they become sexually mature.

The wild steelhead inhabiting the Nottawasaga have had approximately 110 years of natural selection to develop genetic and life history diversity, maximize local abundance and productivity and behaviors to optimize population size based on the local environmental templates (e.g. hydrology, geomorphologic characteristics). The creation of local life history and behavioral traits and co-adapted gene complexes (genetic structure) has been developed by allowing volitional access to high quality habitat throughout the watershed, not stocking, controlling harvest, and letting the fish do what they wish. This has been seen in other wild steelhead populations within the Great Lakes (cf. Superior Steelhead, The Osprey No. 39). The naturalized steelhead in the Nottawasaga River provide hope for restoring wild steelhead to parts of their historic range where loss of access, habitat, and over harvest have plagued wild steelhead. This case study highlights that local adaptation and population recovery is possible when wild fish are given a chance to recover.

We hope you enjoyed the article and thank the authors and The Osprey for sharing their work with us.

Have a wonderful weekend everyone, stay safe and be healthy.