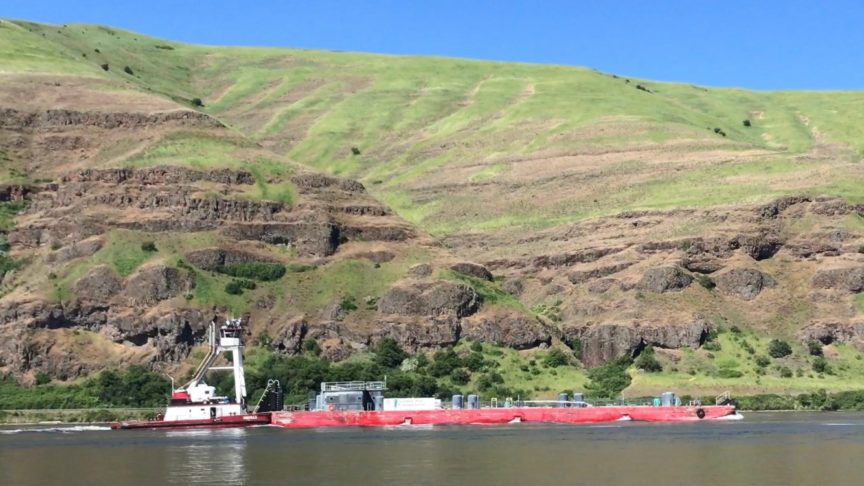 Picture a brontosaurus-sized live-well floating down the river on an idyllic spring day. Only this live-well isn’t filled with the biggest limit of crappie or walleye you’ve ever seen. Nor is there a cooler full of ice cold beer or an epic fish fry in your future.

Although I admittedly have a fondness for each, I’m referring here to the practice of barging healthy salmon and steelhead smolts through the Snake and Columbia River hydro system.

A barge can carry tens to hundreds of thousands of steelhead smolts or upwards of a million Chinook salmon smolts, which are smaller in size than steelhead of the same age class.

Why remove these fish from the river and transport them by barge hundreds of miles downstream? The answer is: to improve their survival to the ocean.

Sea-run Snake River fish species must pass through eight dams, four in the Snake and four in the Columbia. Barging some of them past these dams helps them avoid most of the harmful impacts associated with the hydropower system.

But does this intervention actually work, at least well enough to justify the substantial investment of resources required to do it?

Barging of Snake River salmon and steelhead was initiated in 1981 by the U.S. Army Corps of Engineers. The rates of transport have fluctuated over almost 40 years of effort, possibly contributing to the fact that, with an occasional outlier year or two, there has been no improvement in the status of salmon and steelhead runs in the Snake River basin and these runs remain ESA-listed today.

To clarify the utility of barging smolts in the Snake/Columbia system, the Idaho Department of Fish and Game recently released an article about this practice, Row, Row, Row Your Smolt Gently Down the Stream: Barging Juvenile Salmon and Steelhead through the Columbia and Snake Rivers.

At first blush their statement, “immediate survival of barged juveniles is nearly 98% compared to the 40-60% survival rate” for in-river migrants would lead a reader to give a big two thumbs up to the practice of barging.

But as they say, the devil is in the details.

For example, we know that Snake River Basin sockeye are worse off when barged. Moreover, a recently published study (Tattam, et al. 2020) estimated up to 42% of the spawning steelhead found in the John Day River were hatchery origin, despite no hatchery steelhead being released in the John Day drainage. Through PIT tag detections it was determined those hatchery steelhead were Snake River hatchery origin and directly correlated to the number of steelhead barged at Lower Granite Dam.

Strikingly, compared with hatchery and wild steelhead that were allowed to migrate in‐river as smolts, barged hatchery smolts were 73 times more likely to be detected in the John Day River during their adult return migration.

Unfortunately, this means those stray hatchery steelhead are likely directly impacting the diversity and reproductive fitness of the MPG (major population group) of wild steelhead in the John Day. The John Day is a wild steelhead stronghold, not only in the Columbia River basin, but for all of Oregon. Because of this status, Oregon has invested substantially in protecting and restoring this watershed.

State resource agencies have worked with local landowners throughout the John Day to dramatically improve grazing practices and water usage, and have conducted extensive habitat restoration — such as beaver reintroduction — to increase the quality and quantity of habitat for ESA-listed salmonids. Indeed, this work has greatly improved habitat conditions in many streams.

It is difficult to imagine that the high stray rates are not reducing the overall return on those habitat investments.

The challenge is that attempts to improve returns of hatchery steelhead in Idaho are resulting in potentially strong negative impacts in downstream populations. Tattum et al. (2020) suggest actions that can be taken to reduce the straying, such as altering the time at which the smolts are barged and limiting the overall number of smolts.

But whatever action(s) may be taken to reduce straying, it is time to rethink the practice of barging hatchery steelhead smolts if it will continue to put other ESA-listed populations at risk.

Hatchery salmon and steelhead remain popular with some anglers. We get that, and our Portfolio Approach encompasses hatchery supplementation in rivers where wild populations are compromised and unlikely to recover. However, protecting and restoring runs of wild salmon and steelhead and their habitats remains, by far, the cheapest and most effective way to ensure our steelhead fishing heritage will be sustained.

We are confident that, with the help of our decision makers, we can create a better future for the Lower Snake River Basin — one that works for all. Please consider reaching out today.