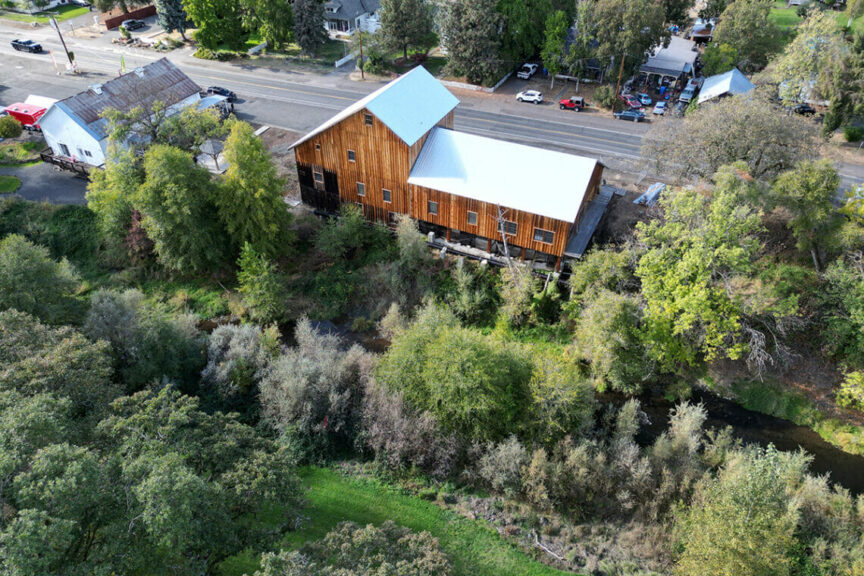 Little Butte Creek joins Oregon’s Rogue River near the town of Eagle Point and contains some of the most important salmon and steelhead habitat in the upper Rogue basin. It is also home to the Butte Creek Mill, the oldest grist mill still operating west of the Mississippi River. The mill is listed on the National Register of Historic Places and is celebrating its 150th anniversary this year.

In late October, there was an additional reason for a celebration: After nearly a decade of work, a long-running partnership between Trout Unlimited, the Butte Creek Mill Foundation, and the mill’s former owner finalized the purchase and transfer of a senior water right in the watershed, securing permanent water protections for Little Butte Creek and ensuring the mill can continue to operate and rebuild following a devastating fire in 2015.

This new commitment to instream flows will prevent potential de-watering of up to twelve miles of Little Butte Creek during summer and fall, or other periods of water shortages, and will permanently restore flow to an 1800-foot section of the creek between the mill’s intake and outflow which previously caused a seasonal barrier to fish migration, especially fall Chinook, whenever it had been allowed to go dry.

The water right encompasses nearly the entire instream summer flow of lower Little Butte Creek. The permanent protections mean the water cannot be claimed or diverted by users upstream and will sustain those flows all the way to the creek’s confluence with the Rogue mainstem. The deal is the largest water transfer of its kind in Oregon to date and a perfect example of TU’s commitment to building durable solutions for water allocations that protect native fish and river ecology while benefiting local communities and economies.

Chrysten Rivard, TU’s Oregon director, spent years working to build the arrangement and secure funding for the purchase and transfer of the Little Butte Creek water right. “Across Oregon, like many places in the west, we are seeing reduced snowpack each winter and less rain during the summer,” she explained. “In times of water scarcity, trust and collaboration among stakeholders is critical. Trout Unlimited staff members live and work in these watersheds and are providing a boots-on-the-ground commitment to building win-win situations for rivers, struggling fish populations, and the communities and people that depend on both. This is the approach that can build long-term resilience.”

The Butte Creek Mill was built in 1872 and still grinds three types of wheat (hard red winter, hard white, and soft red winter) into flour using the millstones originally quarried outside of Paris, France, a century and a half ago. Water from Little Butte Creek powers the mill’s operations and the water right originally associated with the mill is among the most senior in the entire Rouge River basin.

On Christmas in 2015, an electrical fire broke out and burned much of the mill’s original structure. Bob Russell, the mill’s owner at the time, transferred the mill’s property to the Butte Creek Mill Foundation after the fire. The foundation began the hard work of rebuilding the mill and continuing operations. Russell retained the water right.

With the support of a generous donor, TU was able to lease the water right several years to protect instream flows while negotiations, planning, and fundraising for permanent protections moved forward. As a part of that process, hydrologists and engineers assessed how much water was required for the mill to operate and how much water was needed for Little Butte Creek’s instream flows to adequately provide fish passage, ecosystem function, and improved water quality.

The original water right allowed a diversion rate that varied seasonally between 22.62 and 24.40 cubic feet per second (cfs). It is a non-consumptive water right: after the water is used to turn the mill’s equipment, it is returned to the creek.

In the arrangement finalized this October, TU purchased the water right from Russell and divided it into two portions. The first portion permanently transfers 6.62 ‐ 8.4 cfs of instream flow to the state of Oregon for the benefit of fish and wildlife. The contract stipulates that the remaining 16 cfs continues to be available to power the mill’s historic and unique milling operations and is kept instream when not in use by the mill.

“My wife, Debbie, and I purchased the historic Butte Creek Mill and accompanying water right over seventeen years ago,” Russell said. “During those years, I was approached many times by parties interested in the water right. Trout Unlimited showed early interest and I have worked with them for years. After the fire, they went out of their way to work out a deal to ensure the Butte Creek Mill Foundation will continue to be the last water-powered commercially operating mill west of the Mississippi River. That was very important to me, and I want to thank Trout Unlimited and the funders for their efforts to make it happen.”

Jay O’Neil, Board Chair of the Butte Creek Mill Foundation said, “From the beginning, this collaboration always required a broad range of diverse goals be met to be successful. Working together, we found a solution that will not only preserve the mill’s ability to rebuild and continue historic operations, it will also help protect the long-term health of the Little Butte Creek watershed.”

Trout Unlimited was able to purchase the water right with generous funding support from the Oregon Water Resources Department, the Oregon Department of Fish and Wildlife (ODFW) Restoration and Enhancement Board, and the Medford Water Commission.

Dan Van Dyke, the Rogue District fish biologist for ODFW, described the impact of the new, permanent protections of instream flows by saying, “Our native fish need water to survive. They need quality water to thrive. And they need to be able to migrate freely to find quality water that meets their needs throughout life. Keeping this water in Little Butte Creek while also meeting the needs of the foundation is truly a win. Our native fish—Chinook and coho salmon, wild steelhead, cutthroat trout, Klamath smallscale suckers, and Pacific lamprey—will benefit, as will the angling public.”

Rivard worked tirelessly to raise the funding required and ensure the partnership was successful. “We’re looking forward to continuing to work closely with our partners at the Butte Creek Mill Foundation and thank Bob Russell for his commitment to water conservation,” she said.

She added, “Historically, it is important to remember that when many of the water rights were allocated across western rivers, the needs of ecosystems and fish often weren’t considered at all. As a result, when water is low, there isn’t enough to go around. TU’s effort in Little Butte Creek, and across the watersheds where we work, is really an effort to give fish and rivers a voice at the table and make certain their needs are being met going forward.”