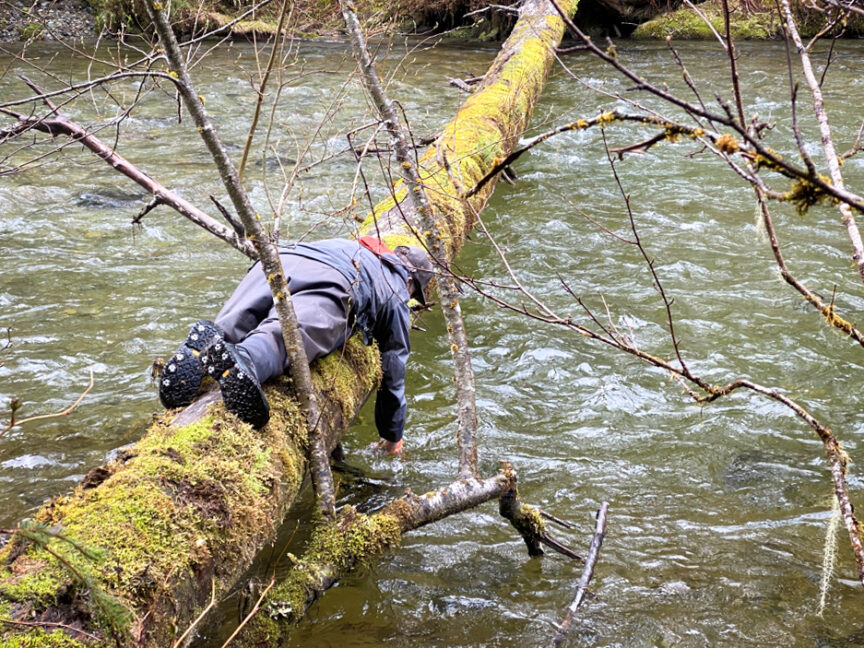 We all know how adept steelhead are at not being seen. Even on a sunny day, in a shallow, small-stream tailout with no appreciable cover, it can take an experienced observer a bit of time to pick out the silhouette of a fish from the river cobble. Add in a little woody debris, some broken surface water, a healthy current and a bit of “steelhead green” coloration to the stream and you might as well spend your time looking for ghosts…which is pretty much what it felt like we were doing on the banks of this particular wood-choked, snowmelt-swollen stream in the Tongass National Forest in early May 2021.

Our trio had traveled to this stream with one overarching goal in mind – to observe steelhead using the available habitat and to document that use for species inclusion in Alaska’s Anadromous Waters Catalog (the AWC, more on that later) as part of the Trout Unlimited, Alaska Program Fish Habitat Mapping and Community Science Project (“the Project”). With me were Alan C., a fellow Southeast Alaskan fishing guide, and Dave M., CEO of Grundens, wild fish enthusiast and chief collaborator for this spring’s surveys. We were armed with fly rods, a GPS and a waterproof camera as our primary data collection tools. I also had a drysuit in my backpack, just in case the fish didn’t feel like biting or holding still for an underwater photo. While I wasn’t super-thrilled about the prospect of jumping into a 2.5°C (36.5°F for the non-metrically inclined) logjam-infested river in our quest to document steelhead, I knew it was a possibility and one I was prepared to undertake in the name of data collection.

The AWC specifies which water bodies are important to anadromous fish species and therefore afforded protection under Alaska state law; water bodies that are not listed in the AWC are not afforded that protection. Virtually all of the waters we have selected for steelhead presence surveys are already listed in the AWC, but the listings fail to capture the full complement of anadromous species using the habitat. As I see it, this presents an issue due to two factors. The first is the variation in timing and habitat use by the different anadromous species of SE AK. The second is the best available distribution and habitat use data for comprehensive management of anadromous species and their freshwater habitats.

By way of example, let’s take a hard look at the stream we were on for this survey – like most steelheaders, I’m not gonna tell you the name of this flow, so we’ll refer to it as “Stream X”. Stream X sees some recreational fishing use from May to September, mostly in the lower meadow and estuary section. Stream X has 2 miles of habitat use in the AWC, and the species listed as using that habitat are pink and chum salmon and Dolly Varden char. Stream X also happens to be a stream I have both fished and guided guests on often over the last few decades and over the years I have also seen (and had my guests catch) cutthroat trout, steelhead and coho salmon in that stream. If Stream X is already listed in the AWC and afforded statutory protections for anadromous species, what’s the big deal about not including all species present?

For starters, there is a fairly wide variation in migration and spawn timing between the species “officially” listed in the AWC and the species anecdotally using the habitat. The Pacific salmon of Southeast Alaska (pink, chum, sockeye, coho, king) typically migrate and spawn later in the year than the Pacific trout (steelhead, cutthroat). Salmon are generally spawning from July to October, whereas the trout spawn from April to June. Additionally, juvenile pink and chum salmon begin migration to the marine environment within a few days of emergence from the gravel, in contrast with trout and the other salmon, which typically rear in freshwater for at least a year. See where I’m going with this? If there is a need for a habitat permit to be issued for work on Stream X (which only lists pink, chum, and Dolly Varden in the AWC), the Alaska Department of Fish and Game (ADFG) biologist tasked with writing the permit may allow for in-stream disturbance to take place during a window of time in which these species are going to be least impacted, which happens to be late April to mid-June…right in the heart of the critical steelhead spring spawning window. The habitat needs of all these species vary as well, and while there is certainly overlap of use, each species has its own habitat requirements for spawning and rearing. The lack of inclusion in the AWC represents a conservation concern, as the state has limited authority to protect undocumented fish habitat.

The second issue presented in the Stream X scenario is one that fisheries managers worldwide have faced since the beginnings of fisheries management, and that is: Where, spatially and temporally, do fish live? If your management model assumes a certain number of streams in a given area, how is the model impacted by populations you didn’t know existed? As we saw in the previous Stream X example, this issue isn’t just limited to fisheries management either. Watershed and conservation planning efforts and in-stream and riparian habitat restoration programs also rely heavily on knowledge of fish distributions and their area and time relationship to other resources such as minerals or timber, as well as construction and development activities. If comprehensive fish distribution information is incorporated early in the planning stages of a project, they can be designed to avoid habitat impacts. By the same token, the absence of comprehensive fish distribution information can lead to unintended fish habitat impacts.

At the risk of sounding like a broken record on this subject, these previously mentioned fish habitat conservation authorities and planning processes are limited by the extent of current knowledge of fish habitats and their distribution…and in Alaska, that information is compiled in the AWC.

The AWC currently lists about 8,000 streams, rivers and lakes in Southeast Alaska which have been specified as being important for anadromous fish. Although ADFG is tasked with surveying for and updating the AWC, there are still a large amount of un- and under-documented water bodies that are important to anadromous species in Southeast Alaska. Due to data gaps, the number of anadromous streams yet to be documented is difficult to quantify, but it is generally agreed upon by ADFG and others that less than 50% of water bodies used by anadromous fish are currently in the catalog. In addition to unlisted waters, local knowledge and past anecdotal observations of places similar to “Stream X” suggest the AWC does not reflect the true species richness for a significant proportion of Southeast Alaska streams. Through the work of the Project, TU is addressing these gaps by adding observations on priority species and areas to the AWC. Each new addition enhances statutory protections on these species and habitats and adds to the body of knowledge concerning fish and habitat distribution in Southeast Alaska.

Since the start of the Project in 2018, we and our dedicated Community Science volunteers have gathered enough data to add steelhead to the AWC listing of 10 streams and 2 lakes, representing a total habitat length of nearly 52 kilometers. In addition to steelhead observations, we have also added several other anadromous species (including pink and coho salmon, Dolly Varden char, and cutthroat trout) to listed water bodies totaling 16 kilometers of habitat and added 16 new water bodies representing an additional 11 kilometers of habitat to the AWC.

As it turned out, I didn’t have to jump in the river to search for steelhead that cold and rainy day in May. After spending a few hours crashing through devil’s club thickets and scaling major logjams with little to show for the effort, we spotted a pair of steelhead under a log, with a third fish hovering nearby. Dave M. made a few casts and got one of the fish to eat, but luck was on the side of the fish that day. They soon resettled under the log and, after resting them for a short period of time, I managed to crawl out the log and get a lucky underwater photo showing all three fish. After taking a waypoint and jotting down some notes about the encounter we continued our way upstream in search of more fish, knowing we had secured enough information to add steelhead to yet another Southeast Alaska stream.

Sometimes, steelhead are really good at not being seen…that doesn’t mean they aren’t there.