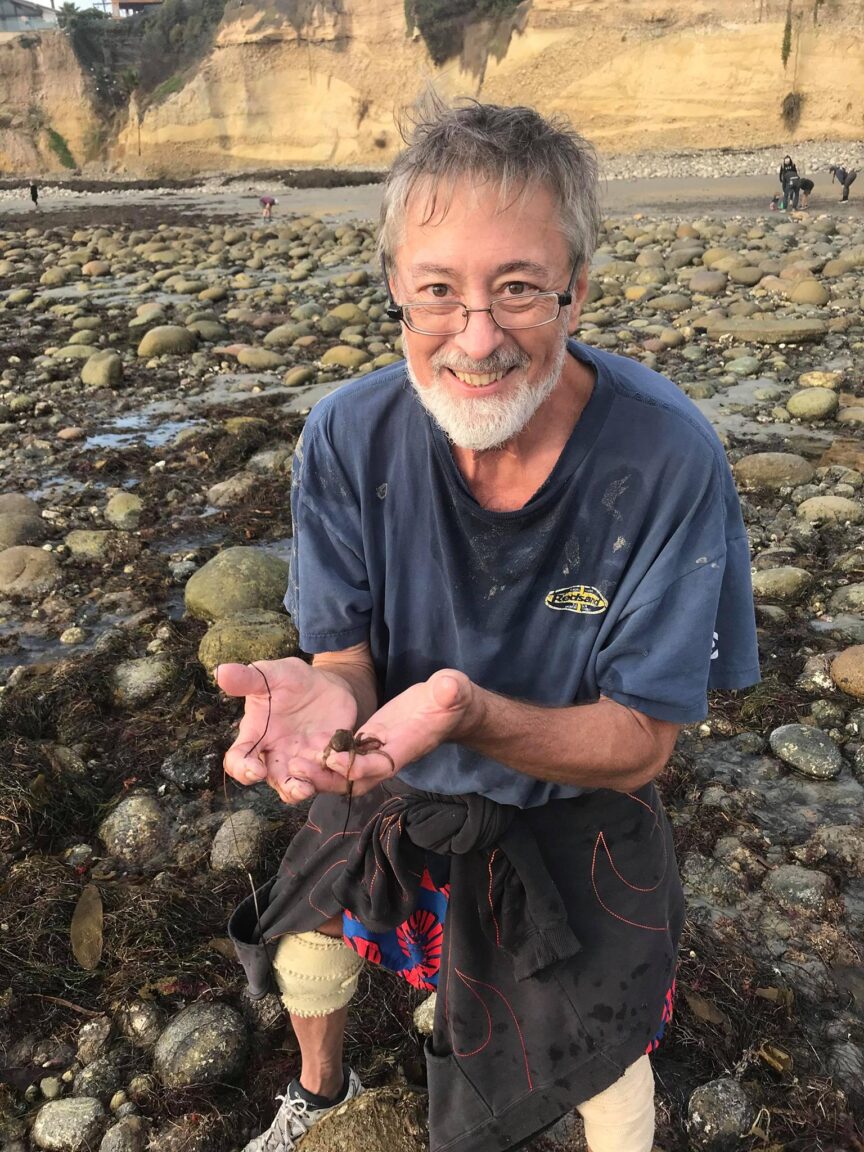 Guest author Pete Xander is a retired biologist, land use planning consultant and a former staff member of the California Coastal Commission in the 1980s. His conditions on a permit for the quadrupled expansion of a sewage treatment plant on upper Malibu Creek in southern California prevented extinction of the southern steelhead. He now lives near Lake Arrowhead, California in the San Bernardino National Forest, close to his daughter and two grandsons.

As a kid born and raised in National City, California, south of San Diego, you wouldn’t think I’d grow up to be a steelhead advocate. But in the early 1960s, I read fishing magazines and read everything I could. In 1974, in my second year of college at San Diego State, a professor told me about a rugged wilderness creek on Palomar Mountain with native trout, and with ultralight gear, 2# test, and barbless 1/32 Dardevle Skeeter spoons, my late brother and I crawled, rock-hopped and sharpened our water reading skills, avoiding spooking the landlocked trout that were the descendants of steelhead that had spawned there via the San Luis Rey River, decades or centuries before.

My brother and I had fly-fished for stocked rainbows in the small streams of San Diego County before being told of the “secret fishin’ hole” by my geography professor, but we were ready for the winter steelhead runs on the northern California rivers. We went to the North Fork of the Smith River and the Trinity River, but I caught the only steelhead, a 4 lb. spawned-out kelt that I had hooked below Lewiston Dam on the Trinity. Despite 35-degree weather and sleet being blown into our faces, we fished and froze while pursuing steelhead.

My biggest action, though, came when I was on the staff of the California Coastal Commission. I had learned from a DFG warden that the streams flowing through the Santa Monica Mountains had steelhead in them. Just a year later, the Tapia Sewage Treatment Plant applied for a permit to expand from 2 million gallons per day (mgd) to 8 mgd into the upper watershed of Malibu Creek. I met with three of their engineers and saw an opportunity to improve the habitat of Malibu Creek. I told them I wanted to condition their permit to upgrade to tertiary treatment and to continue discharging the effluent into Malibu Creek.

Regarding the discharge of the effluent, one engineer told me, somewhat perplexed, “Well, that’s what we want to do,” but I clarified my condition. “No, I want to make sure that the water is all discharged into Malibu Creek to improve spawning and smolt habitat for the southern steelhead, and for them NOT to sell off the water to irrigate highway landscaping.” About the tertiary treatment, they said, “We’ve wanted to, but our Board of Directors has been reluctant to do it. But if that mean ol’ Coastal Commission makes us do it, well,  gee — I guess we’d be forced to,” one of the finest and funniest wink-wink, nudge-nudge efforts in my experience.

In between El Nino storms in February, 1983, southern California had a few days one weekend with a warm Santa Ana. The mouth of Malibu Creek was open and I knew steelhead would be in there to spawn, so I called my brother and had him come up from San Diego to fish. Using fly rods as well as ultralight gear, we hooked and released over 3 dozen smolts each, the smolts shining like new silver dollars with light metallic rosy-pink flashes on their scales and a few sea lice attached to their anal fins. These were “half-pounders” about 12″ long, but my brother hooked, fought, and lost one steelie that was 16 lbs easily. It had spawned and was out of strength, yet the fish rolled and popped his line.

Now, nearly 40 years later, I have a spine I injured at Edwards AFB and have been disabled since 1992. With nerve damage and bone spurs in my degenerated and desiccated discs, my rock-crawling days are over. But after the Rindge Dam is removed and restoration of steelhead spawning is re-established on miles of upper Malibu Creek and Cold Creek habitat , I hope to take my young grandsons there and introduce them to the joys of catching steelhead. That permit action of mine kept the steelies from being extirpated during droughts of the 1980s and 1990s, at which point the NMFS declared them and other steelhead runs endangered. In their document explaining the decision, they credited that permit action as having saved that southern population from extinction by maintaining Malibu Creek as a stream with a perennial freshwater flow — a haven and permanent refuge during droughts for all spawning steelhead from Point Conception to the Mexican border.

Saving that population of steelhead is one of my accomplishments in habitat conservation and my proudest one. It is bad enough battling developers and polluters of streams and rivers; it is worse fighting global warming and the resultant impacts to cold-water fishes and habitat changes. But I remain hopeful that others out there like me are working to preserve and enhance steelhead spawning habitat and for all growth phases of steelhead. I never give up on a fight, and this one is the greatest one we all will face; but if more likeminded people join us in our endeavors, we can save these magnificent fish for generations to come. Spread the word — the war is never over until the final battle is fought. Keep fighting the good fight and enlist more people in our endeavors. Here’s hoping we win.

The Southern California steelhead is an endangered species. Learn more about their listing and recovery plan here and what you can do to help here.