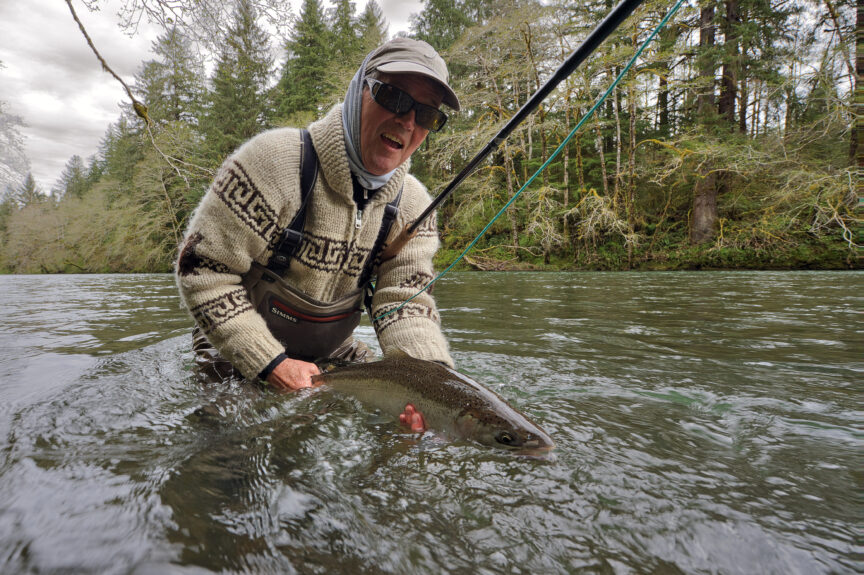 The South Coast region of Oregon represents one of the most important opportunities for conserving and protecting wild steelhead today. That’s because the Oregon Department of Fish and Wildlife has released the draft Rogue-South Coast Multi-Species Conservation and Management Plan (RSP) for the waters of this area, which include such legendary steelhead fisheries as the Rogue, Elk, Sixes, Chetco and Coquille rivers.

It’s also because the Oregon South Coast is one of the last resource-areas on the West Coast where you can harvest a wild steelhead.

Wild Steelheaders United has been closely engaged in ODFW’s planning process since its inception. Like many other angler-advocate groups and leaders in the steelhead angling world, we are opposed to ODFW’s preferred alternative, which allows for continued kill of wild steelhead. We’ve covered the biological factors that must be weighed in these kinds of resource management decisions— and that suggest convincingly that ODFW should disallow wild fish harvest in this region, at least until the agency has better population and angling data and can be assured that taking of the dwindling number of wild steelhead here can be justified scientifically.

Now it’s time to sum up what we have learned in our five-part series and why it is important.

Here are the previous posts, if you need to catch up:

Some claim the debate over harvest of wild steelhead in Southern Oregon is merely a social issue, not a biological one, and that there is no compelling biological rationale for curtailing wild harvest. We respectfully disagree. The effects of harvest on wild steelhead populations, particularly in terms of reduced diversity and its effects on productivity, is far from settled in the scientific community.

Our posts have focused on the Rogue River, for a couple of reasons. For one, the Rogue has by far the largest wild steelhead population with the greatest level of diversity of any system in the South Coast region. Also, we know that 60% of wild winter steelhead harvested in Oregon annually come from the Rogue (fish from the Chetco River make up an additional 30% of the harvest). There is also a wealth of information from commercial fisheries and a long history of sport fishing to draw upon to develop a good understanding of how steelhead populations have changed in the Rogue over time.

Even a cursory review of old documents and fishing reports from the Rogue makes one thing very obvious: there are a lot fewer fish now.

In fact, as far back as 1961, Oregon State Game Commission biologist Cole Rivers wrote, “The runs of salmon and steelhead in the Rogue River system today are far below their former population levels. Actually, there are only a few people living who can recall the almost unlimited abundance of these fish before the decline began.” It is important to note that Rivers began working on the Rogue in 1943, when runs were more abundant than today.

There is also abundant evidence that the average size of both summer and winter steelhead has declined markedly in the Rogue, and run timing there has been truncated. Early Rogue anglers such as Joe Wharton and Zane Grey wrote that summer runs over 10 pounds were common. There are also reliable accounts of deep-bodied steelhead reaching 42” in the Rogue. When it became clear that fish of this size were on the decline in the Rogue, anglers initially blamed gillnetters. While gillnetting probably was the primary causal factor in the decline at that time, but even after a bitter battle that resulted in the elimination of all commercial fishing in the Rogue in 1935, population segments continued to disappear into the 1960s.

Rivers and others also documented excellent fishing for winter runs in November in the Rogue canyon. When was the last time you caught a 15-lb Rogue summer run or had a double-digit day of November winter runs?

Changes to age and size at maturity are classic effects of overfishing, something scientists have termed “fisheries induced evolution.” To be clear, habitat conditions on the Rogue and South Coast rivers are undoubtedly less productive today than historically. However, loss of diversity among Rogue wild steelhead is almost certainly also related to fishing, because habitat degradation typically affects all life histories equally rather than selecting against certain run timings or large body size. It is hard to know what exactly we have lost in this case, but it appears that intensive sport fisheries contributed to this loss of diversity.

While fishery managers have taken notable steps in recent decades to reduce bag limits and close tributaries to angling to protect spawning adults and juveniles, these actions were all taken after the greatest population declines had already occurred. And these actions clearly have not been enough to rebuild abundance and diversity.

Given the importance of diversity for population health and durability, and the poor ability of models to account for diversity, what does this all mean for the RSP?

In other words, the plan assumes it will be impossible to increase productivity of wild steelhead on the South Coast without increasing the amount of freshwater habitat or the capacity of existing habitat.

We have reduced the diversity present in wild steelhead populations, and that effect is likely (at least in part) a result of decades of overfishing. Thus, it seems unlikely that the current depleted level of production is solely due to habitat. In fact, it’s entirely possible habitat conditions were worse back in the 1940s when the steelhead were more abundant, diverse, and larger in size — in the past, dams were constructed and torn down, water withdrawals were not screened nor monitored, cattle were allowed to graze riparian areas, many creeks partly or entirely dried up during summer, and environmental protections provided by authorities such as the Clean Water Act and Northwest Forest Plan were not yet in place.

This means that the most basic assumptions in the RSP, those used to establish metrics of population health for steelhead on the South Coast, could be dead wrong. This is why quantifying uncertainty is so important. It’s the only way to differentiate correlation from causation.

Moreover, the RSP extrapolates information from a single population (the Upper Rogue) to apply to many others. This is inappropriate because there is no way to know if all populations in the region are equally healthy and following similar trends — especially considering that the Upper Rogue drains the Cascades rather than the Coastal Range, giving it a unique climate influence among all South Coast watersheds. Given the uncertainty in estimates of steelhead abundance and the untested assumptions about habitat capacity, extrapolation from the Rogue to every other population likely compounds the flaws in the assessments that have been made.

This high level of uncertainty does not mean these populations are on the verge of collapse or that we cannot fish. Rather, it means that we have a very poor ability to predict when and if they might collapse; and what level of harvest (if any) is appropriate.

It is very difficult to describe definitively the relationship between habitat quality and quantity and the productivity of steelhead. For example: are steelhead no longer using a habitat because the habitat is too degraded, or because the steelhead life histories that once used that habitat were eliminated through fisheries? Because the productivity of habitat is partly dependent on the diversity and distribution of steelhead, it is — at least in this case — misguided to assume that the populations are at their capacity and that fisheries can have no effect on their status.

And with habitat conditions getting hotter and drier across pretty much all of the historic range of wild steelhead, it is even more urgent that we take a conservative approach to management. Steelhead are under tremendous evolutionary stress to adapt and keep pace with climate change. It is difficult to predict which fish and life histories will ultimately enable the population to persist. That is one reason it is incumbent upon resource managers to “climate proof” fish populations by ensuring they have sufficient abundance and diversity to remain productive into the future.

As of the most recent draft, the RSP offered alternatives ranging from catch and release only of wild steelhead to continuing to allow harvest of wild fish. We expect ODFW to release a revised draft of the RSP in the first week of October, and on October 15th this plan will be presented to the ODFW Commission. Wild Steelheaders United and Trout Unlimited strongly believe that a catch and release alternative should be adopted for at least the next five years while ODFW collects data that can help answer questions which remain regarding the status and trends of wild steelhead on Oregon’s South Coast.

Especially as climate change is rapidly making habitat conditions in both freshwater and the marine environment less favorable for steelhead, we can no longer trade short-term fishing opportunity for the long-term health of wild steelhead. Harvest of wild steelhead cannot be justified absent sufficient data and scientific consensus that populations here, or anywhere else, will not be further compromised by such a policy.

Stay tuned for information about further opportunities to comment on the Rogue-South Coast Multi-Species Management Plan, and go here to learn more about how Wild Steelheaders United are leading a five-state effort to protect and restore wild steelhead stocks, habitats, and sustainable steelhead fishing opportunities.