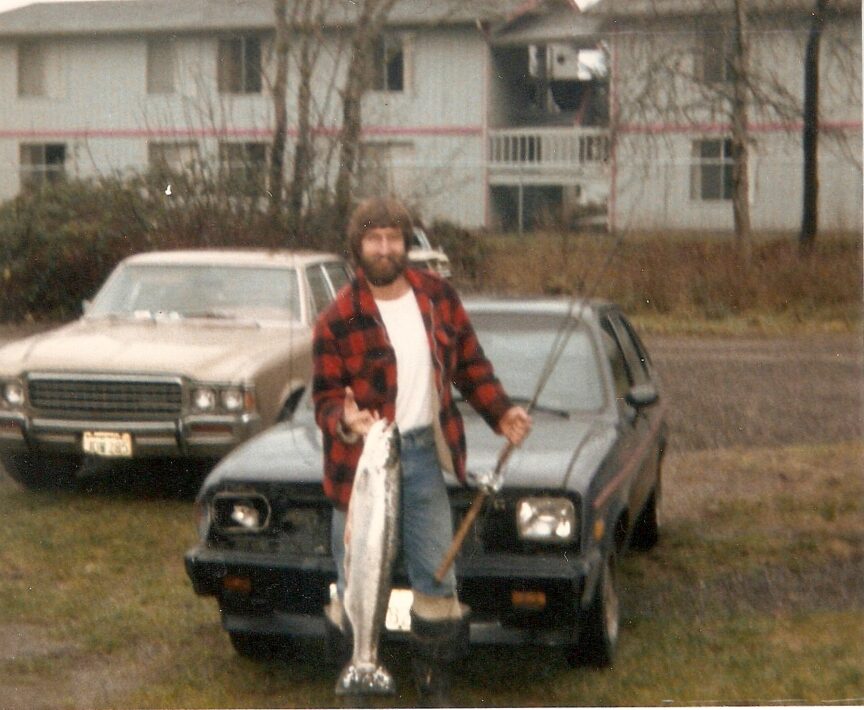 Wild Steelheaders United ambassador Lee Geist shares his history with Hood Canal steelhead and dives into some of the issues impeding their recovery. Follow Lee on Instagram @lee_geist for field reports, steelheading tips and tactics, and the latest steelhead conservation updates.

I had been searching for a particular photo, the photo of my first interaction with a steelhead.

When I found it, it was wrinkled and sun-damaged with a faded orange date stamp in the lower right hand corner. You could see my father gripping a chrome winter steelhead from the captain’s seat of his drift boat and my 3-year-old lips pressed against its nose.

That brisk February morning my dad was fishing for steelhead on the Skokomish River. Little did he or I know it would be the last time I would float a Hood Canal river in February for winter steelhead — it was not long after that photo was taken that all canal rivers were closed to sport fishing during the winter steelhead return.

Hood Canal is a piece of the Salish Sea that rests on the east side of the Olympic Peninsula in Washington State. Steelhead in this area have been in decline for a century and today fewer than 1,500 steelhead return to the canal annually.

As a whippersnapper I had a friend that lived at the mouth of Jorsted creek on the Canal. His house was within walking distance of the Robinson Ranch. At that time the Robinsons owned the entire Hamma Hamma river flood plain along with a large section of canyon access. A group of us armed with ultra light spinning setups, a liberal application of split shot and Eagle Claw pre-tied leaders would naturally drown whole night crawlers in every deep piece of the Hamma Hamma.

We got a random sampling of the trout population. Poised at the top of the boulder in the center of the famed Blue Hole, we would send night crawlers screaming to its darkest depths. The cutthroat we caught were huge and plentiful, and early summer would often kick up a few out-bound winter steelhead. And every once in a while a small, chrome summer rocket would come back-flipping out of the Blue Hole tail out.

The few interactions we had with summer steelhead lead us to search other Hood Canal rivers. Before we knew it we had fished them all and, even at that time, our wild steelhead encounters were few and far between.

Canal steelhead face a lot of the same problems many other steelhead populations face. Factors like habitat loss, predation, overfishing, and life history degradation have all contributed to dwindling escapement. There are two dams on the North Fork Skokomish River, the primary cause of lost habitat here. A developed flood plain and a history of destructive forestry practices haven’t helped steelhead, either.

The other heavy hitters of the Canal steelhead world include the Dosewallips, Dewatto, Tahuya, Duckabush and Quilcene, all of which are completely undammed and the majority of their steelhead spawning habitat resides in the Olympic National Park and Olympic National Forest. But even with loss of estuarine habitat due to bridges and flood plain development along Highway 101, we should still see more steelhead in these waters, shouldn’t we?

I asked this question of Iris Kemp, senior project manager at Long Live The Kings. There is no short answer but with Iris’s help I was able to break the problem down and get you the juicy details.

Hood Canal steelhead face a major problem that was initially identified through the operations of the Hood Canal Steelhead Project, in which NOAA, the Port Gamble S’klallam Tribe, the Washington Department of Fish and Wildlife (WDFW) and other partners worked with Long Live the Kings (LLTK) to implement a hatchery steelhead supplementation program on the Skokomish, Duckabush, and Dewatto rivers.

This program consists of collecting eggs from the redds of wild adult steelhead in an attempt to supplement the population while still allowing for some natural selection to take place. After the eggs hatch, they are reared at their natural growth rate and released after 2 years. But it was not long before tracking data indicated a 50 percent loss in juvenile steelhead before they even left the canal. The data were clear: these juveniles were dying at the Hood Canal floating bridge.

The bridge happens to be the longest floating bridge in the world — it spans the entire width of the canal, connecting the Olympic and Kitsap peninsulas. The bridge pontoons extend down 15 feet into the upper water column. This essentially funnels all critters that live in that piece of water through narrow passages between the pontoons.

Juvenile steelhead and salmon rely on the first 3 feet of the water column, most noticeably at the beginning of their migration. Once faced with the bridge obstacle, these fish are forced to congregate and have become easy pickings for predators of all kinds. Back eddies created by the bridge trap the youngsters and areas of the bridge aggregate plankton, essentially luring juvenile steelhead. Both of these factors exacerbate an already horrendous predation issue.

Iris explains that these fish spend an average of two days trying to find a way past the bridge, giving predators plenty of time to key in on their position. If LLTK is losing 50 percent of their juveniles, we can safely say that we have been losing 50 percent of our wild Canal steelhead as well.

Fortunately, plans to fix this problem are well under way. LLTK and its partners are working on solutions that include facilitating fish passage through re-engineering parts of the bridge. Building eddy reduction structures as well as opening the draw structure during ebb tides will allow these youngsters to get through faster.

Tackling the predator issue may be the most important part. Using state-of-the-art pinniped acoustic startle devices and removing haul-out opportunity for seals and sea lions, LLTK and partners are attempting to make the bridge less appealing to predators.

As far as angling opportunity goes, steelheaders are missing out massively due to the excessive fish loss caused by the bridge. Our loss isn’t due to access: the Quilcene, Duckabush, and Dosewallips have Olympic National Park access for much of their length, including state public access. The Skokomish River has several state-owned public access areas as well as national forest land surrounding the entire upper portion of the south fork. And the water in the upper portions of each system is breathtaking — it consists of untamed river nestled among old growth and unchanged wilderness, and steelheaders are tested with steep canyon walls, rock gardens and unforgiving rapids. The lower sections provide open gravel bars and long runs making Hood Canal rivers the perfect stone to sharpen a steelheader’s skill.

No, our loss of opportunity is due to lack of steelhead. Anglers are still allowed to partake in a summer steelhead catch and release fishery throughout Canal rivers, but you would be hard pressed to get one and without feeling some guilt at doing so.

My father has caught big steelhead in rivers all over western Washington and to this day he will tell you the biggest steelhead he ever hooked was a winter fish on the South Fork Skokomish River. We’ve got a long way to go before we regularly find that kind of fish in the Hood Canal rivers again. But we owe it to the steelhead, and to the anglers who come after us, to keep trying.

What does the future of steelhead in Puget Sound look like? We think there is a solution in the Quicksilver Portfolio. This approach would result in the best remaining watersheds and steelhead populations reserved for wild-only catch and release fisheries, while other fisheries remain open for sustainable, scientifically defendable harvest, including these famed Hood Canal streams. Check out the Quicksilver Portfolio for yourself and take an hour or so to peek into what we believe is the future of steelheading in Puget Sound.