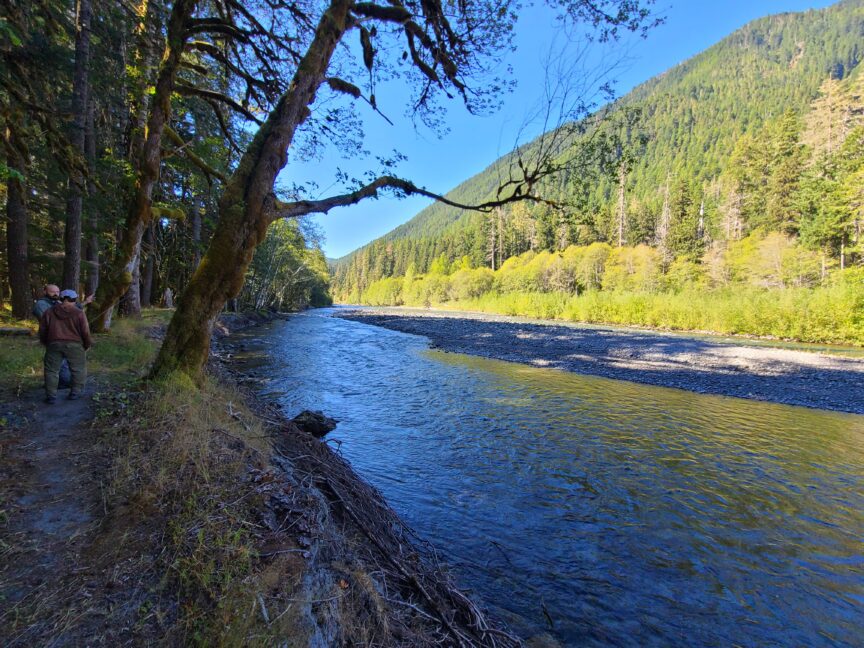 2012 and 2015. That’s when the Elwha and Glines Canyon dams, respectively, were fully deconstructed on Washington’s Elwha River — and salmon and steelhead were able to pass them for the first time in a century.

Only a second, in geologic time. But a whole lot has happened in this watershed since.

As we have discussed in previous posts, Wild Steelheaders United (WSU) and Trout Unlimited (TU) have been collaborating with the Lower Elwha Klallam Tribe, Olympic National Park (ONP), NOAA’s Northwest Fisheries Science Center, the US Fish and Wildlife Service, and other stakeholders to estimate the abundance and distribution of adult summer steelhead now in the Elwha.

We do this by conducting snorkel surveys during the month of September. What we have found thus far is pretty impressive.

Of course, the story of the recovery of the Elwha post-dam removal is larger than just the dramatic re-emergence of summer steelhead. It is about the river, and the mammals, birds, fish, and other species that call it home. It’s also about the many years of conservation investment in this watershed, now paying off.

But given that we are all about wild sea-run O. mykiss, today we offer an update on Elwha River summer steelhead. Let’s take a quick look at what we have learned so far.

In October 2013, I was counting juveniles and bull trout when I ran into a female adult summer steelhead. She was in a tributary, at the base of a canyon — just where one might envision a summer steelhead holding. And she was the first steelhead observed above the former Elwha Dam.

Starting in the summer of 2016, after the former Glines Canyon Dam was finally passable to fish, divers began sampling the upper Elwha. The upper Elwha contains a series of short low-gradient alluvial valleys connected by steep and treacherous canyons. To reach the headwaters, salmon, steelhead and bull trout must make one of the most difficult navigations found in any short coastal watershed.

Historically, summer steelhead were known to utilize both the canyons and alluvial valleys, presumably staging in the canyons and then spawning in the valleys. But counting fish in this system is difficult and complicated, especially in the upper Elwha.

During the initial foray into the upper Elwha in 2016 a group of divers led by Heidi Connor (fisheries technician/ONP) first documented adult summer steelhead in the upper Elwha. They counted six adult summer runs, all of which appeared to be wild. Not a huge number, but they surveyed less than ten miles of stream. It was just a recon mission to get a sense of what was happening.

The next summer Heidi and others counted 74 adult summer runs in the upper Elwha, and in 2018 divers counted 216 adult summer steelhead. No more than 1-3 fish in each year had a clipped fin of any kind, meaning there were very few hatchery fish that had strayed from another river system (hatchery summer steelhead are not released in the Elwha). Recent genetic work affirms that the steelhead in the Elwha are indeed wild fish native to the system.

During the summer of 2019, TU and WSU helped fund and implement another “riverscape” survey of the Elwha, again focused on counting summer steelhead. Partners in this effort included ONP, the Lower Elwha Klallam Tribe, USFWS and NOAA, and others. In total, divers counted 340 adult summer steelhead (six of which were fin clipped and considered hatchery origin), which was the highest count to date.

Due to Covid-19, we couldn’t gather the same large team together during the summer of 2020, so we formed a lean-and-mean version using crew from the Lower Elwha Klallam Tribe and the ONP. We conducted the surveys a week earlier than normal because we were almost blown off the river by rainstorms the previous summer.

It’s 15 miles of hiking (no roads) to the basecamp we used. Our schedule required us to make it there in one day, and it’s not flat load-humping. From basecamp, we take 4-10 mile round trips each day to snorkel the river, sometimes even going farther.

The hike into the upper Elwha is really something. The forest is dense with large trees, moss, and small creeks, and the understory changes in elevation from stream bottom up to the pass and then down again. To make things easier last September, we hired the services of Rob Rutherford and Bob Schimpf, owners of Northwest Llama Adventures. The llamas carried most of our gear and were a lifesaver. We only needed to tote a large daypack.

Once at camp, we unpacked and prepped for three days of snorkel surveys. Our crew didn’t plan to go upstream as far as the previous summer. We had fewer people than before, and Heidi and her crew were going to survey the upper section two weeks later. While we were working upstream, a group working downstream was surveying the middle and lower Elwha.

Snorkeling the upper Elwha is unlike anywhere else I have been. The sheer number of juvenile- and trout-sized O. mykiss there is staggering. The first day of snorkeling is always the best, because when you struggle into your wetsuit it isn’t wet from the day before. This work is all fun and games until it’s below 50°F in the morning and raining…and it’s day two or three.

In 2020, over the course of three days, we counted 114 adult summer runs. Only one was fin-clipped. The count was lower than the past two years. However, our surveys suggested a lot of fish were near the head of the biggest canyon, perhaps waiting another week or two before moving upstream into the valleys where we do our sampling.

We are still working on estimating population size from last year, but it will be lower than last year’s estimate. That should not be disappointing. Steelhead returns across much of the North Pacific have been bad the past few years. Eventually this trend was bound to affect steelhead in the Elwha.

This is part and parcel with recovery of salmon and steelhead, and it’s likely this pattern of good year–bad year could continue, at least in the near future. The new and evolving population of summer steelhead in the Elwha is trying to find its equilibrium. That could, and likely will, take decades.

This is why, as anglers, it is important to remain patient. The steelhead recovery process here is just starting. I’m frequently asked: when will the fishery open? I don’t know. It could be a few years. It could be another decade or more. It depends entirely on the fish.

Scientifically, we are just scratching the surface of what is happening with salmonids in the Elwha. The results provided here are preliminary; a more thorough and detailed analysis of the raw data will be conducted and then published in a peer-reviewed journal.

In the meantime, let’s appreciate the remarkable resilience of wild steelhead, when we give them half a chance. In the Elwha, and in other river systems where we have significant intact habitat in the headwaters (such as the Carmel in California), we continue to see the benefits of dramatically improving fish passage. To support our conservation efforts on the Elwha and other key steelhead waters, please go here.

For more information on our summer steelhead survey work on the Elwha River, please see our previous blog posts.